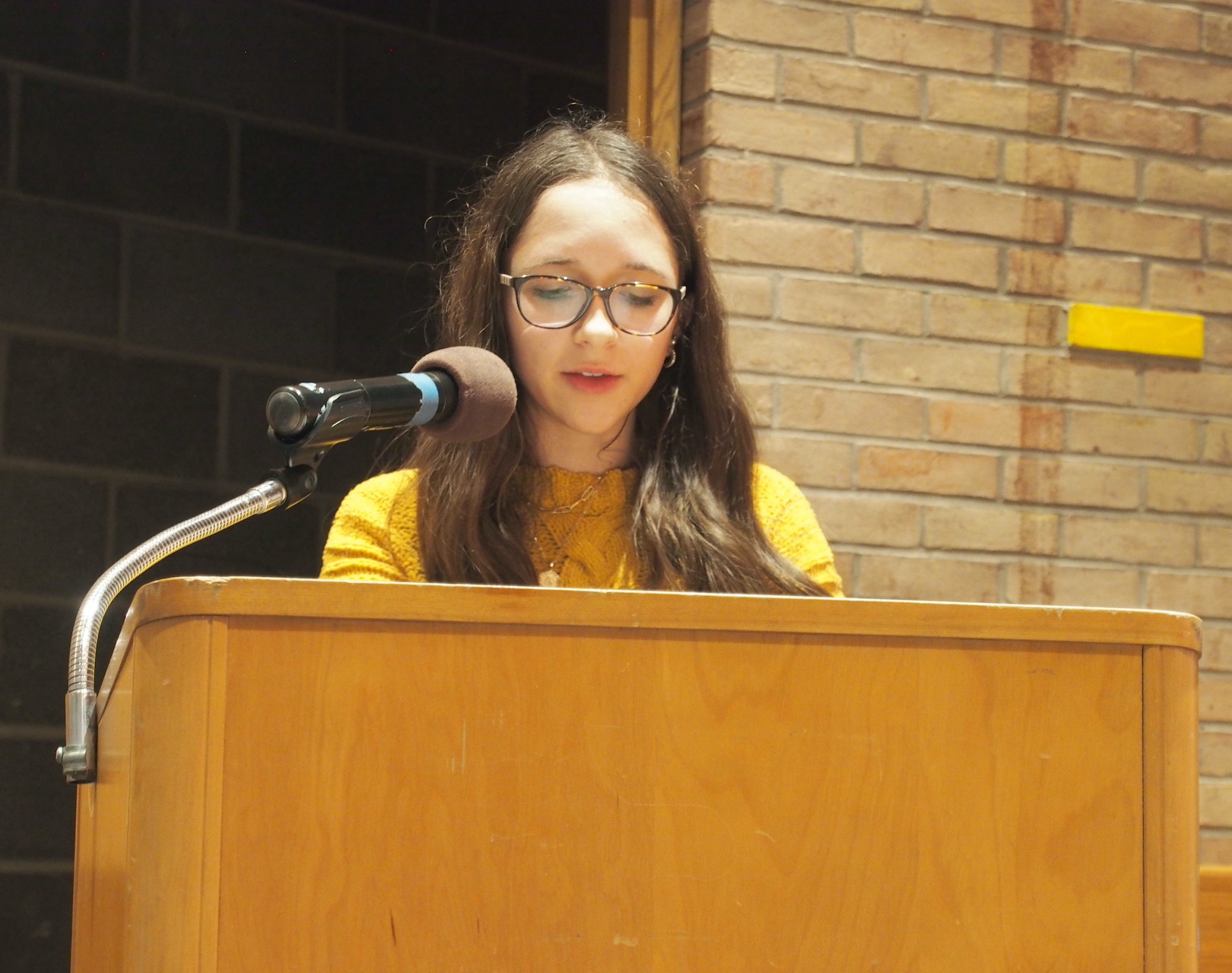 Grand Island High School Ambassador Alyssa Stockinger tells the Board of Education about recent food drives held at the school.

This fall, Grand Island High School students have organized several food drives, to benefit both the Grand Island Neighbors Foundation and FeedMore WNY. One of those recent food drives was titled “Huddle for Hunger with the Buffalo Bills!”

At the Nov. 14 Grand Island Board of Education meeting held at Huth Road Elementary School, Grand Island High School ambassador Alyssa Stockinger said the school’s participation in the food drive resulted in a special recognition by the team.

“Huddle for Hunger!” is an initiative of the Buffalo Bills Foundation and Wegmans, who teamed up with FeedMore WNY. All food and funds that are donated through this initiative will help FeedMore WNY tackle the growing problem of childhood hunger in Western New York.

Alyssa explained that Caitlin Wojciechowski who teaches social studies at Grand Island High School, “gave us an opportunity in class to do a volunteer activity to organize a food drive at school. We had boxes to be Bills decorated. We collected all the food and brought it down to Highmark Stadium. We didn’t expect anything to come of it. Then they ended up by calling her and saying that we won free tickets to go and see the game. And we had to go on the field to get recognized for it.”

At the meeting, the Board of Education honored both Alyssa and Madison Flory, who was unable to attend the meeting, for the efforts in organizing the food drive.

Wojciechowski commended Alyssa and Maddie for “their willingness to stay and help after dropping off the boxes (at Highmark Stadium),” as well as for “how beautifully decorated the boxes were.”

“The game was very fun, so it was nice,” Wojciechowski said.

According to Wojciechowski “As part of the initiative, Alyssa is working toward the Grand Island Seal of Civic Readiness that the social studies department is excited to offer this year. That is part of the reason why she had dedicated so much time on this project. Maddie, as well, was working toward her hours for government.”

She said, “The seal of civic readiness can be a culmination of all of the students’ years in high school. This year, we are running it through the school. Students are collecting points toward the Civic Seal of Readiness.”

Wojciechowski said the volunteer efforts that students make through the clubs they belong to can generate points for them. Ultimately, they need six total points to earn the seal of civic readiness.

“All of the seniors were given a presentation about the Seal of Civic readiness in their government classes,” she said. “We’re hoping that, in the future, this program will just continue to grow.”

School Board President Ashli Dreher told Alyssa, “I know that Mr. Simpson said that he was proud of the effort of the school. We’re very proud of all the hard work you did to organize this: all the effort, energy, and time commitment that you put into doing something wonderful for the community, and it just happened to be a great bonus that the Bills organization recognized your efforts and that you were at the game.”