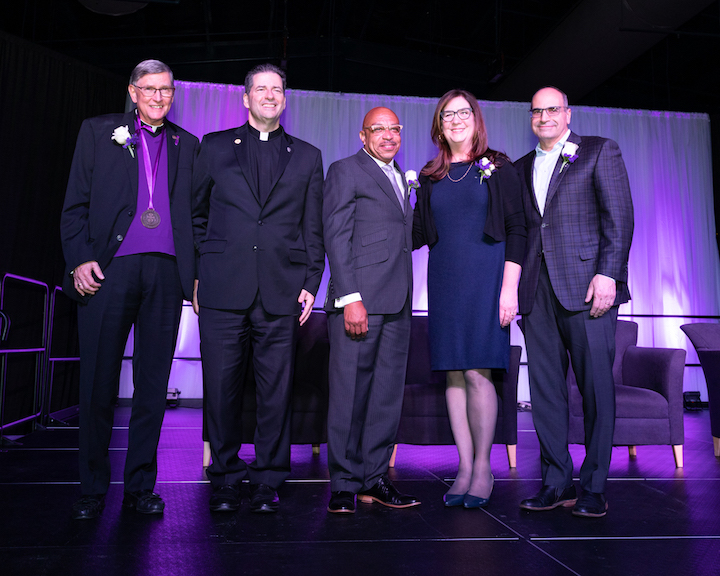 The event was hosted by the Rev. James J. Maher, C.M., president of Niagara University, and co-chaired by Karen Siembida Howard, Class of 1984; and Kathleen L. Neville, M.A.'15. Both are members of NU’s board of trustees. The evening included a formal program with remarks from Maher, along with the presentation of awards to:

“As the senior pastor of True Bethel Baptist Church and the City of Buffalo’s Common Council president representing the Ellicott District, Bishop Pridgen has learned that ‘to whom much is given, much is required.’ This is evident in his continuous, selfless service to make change in today’s world that will last for generations to come. Bishop Pridgen has led efforts to clean up the Buffalo community, fought to restore landmarks and to preserve history that tells an important story. Through his leadership, the congregation of True Bethel has developed community-based services to support those in need of food, clothing and resources. Bishop Pridgen has fully embraced his calling to love and change a generation by giving others hope of reaching their full potential.”

•The OSC Charitable Foundation/Heather and Jon M. Williams, who received the Legacy of Service award. Founded by Heather and Jon Williams in 2014, the OSC Charitable Foundation supports more than 100 community organizations, focusing on five areas: educational, religious, health-related, cultural, and scientific research organization. It also addresses issues impacting the east side of Buffalo, including employment, training, basic and life skills, and barriers to education and employment, such as child care, mental health issues, and transportation.

NU said, “Heather and Jon work with community partners to find practical solutions that bring long-term and meaningful change to these endemic social issues. Most recently, its partnership with Back to Basics Ministries helps at-risk youth on Buffalo’s east side to find support and a path to alternatives that are nonviolent and educationally based.”

•Niagara University alumnus Rev. Joseph G. Hubbert, C.M., '73, who received the President's Medal. After earning his Ph.D. in church history, Hubbert returned to Monteagle Ridge and the department of religious studies, where he further advanced his career to become department chair.

“More notably,” NU stated, “he forged relationships with students that continue well beyond the classroom – often being called upon to marry alumni and baptize their children, and even those children’s children.

“Father Hubbert has served on various committees and dedicated his time to significant roles as a leader on and off campus. He is actively involved with the student body and the Niagara community, demonstrating the true nature of a Vincentian and celebrating his heritage with the Niagara Falls Ancient Order of Hibernians. Father Hubbert has a true passion for Purple Eagle Athletics, which comes alive during time spent with the basketball and softball teams, as well as the club hockey team. As the recently appointed alumni chaplain, his faith-based Vincentian mission will endure for current and future Purple Eagles.”