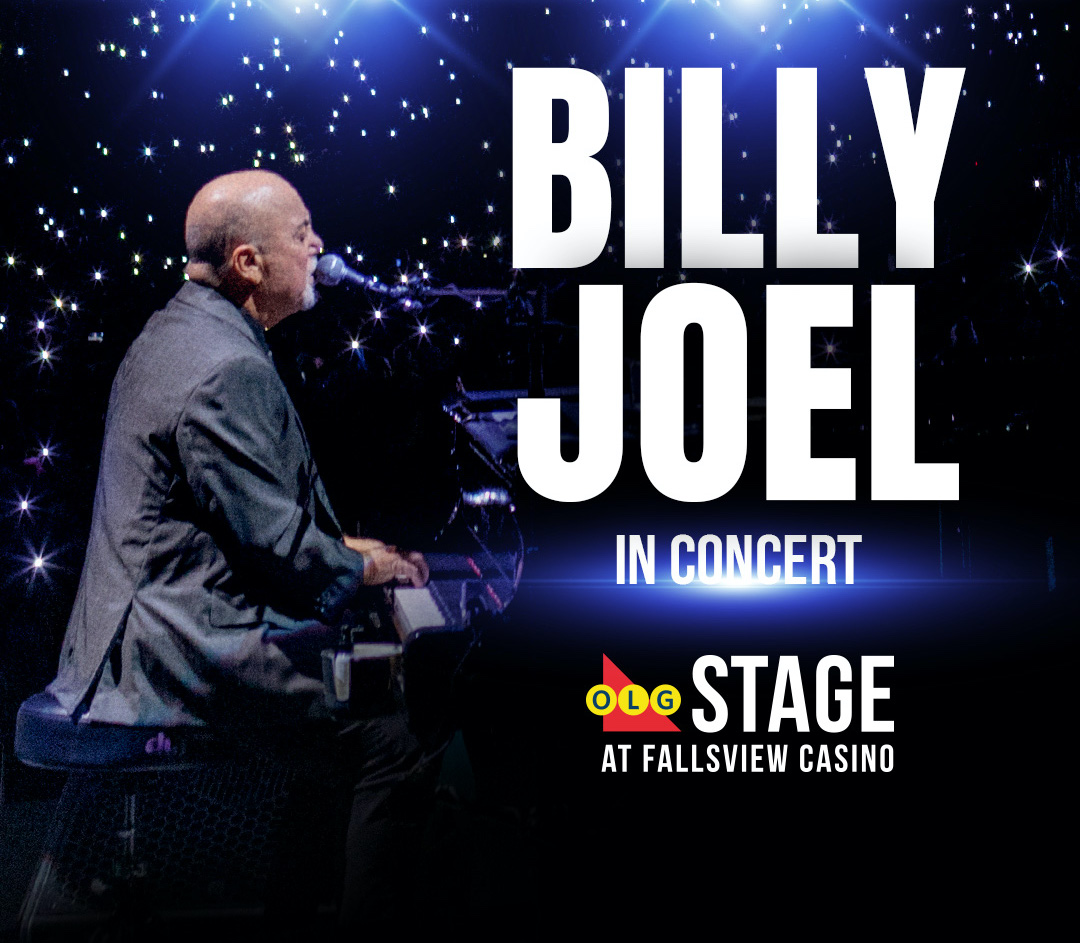 Fallsview Casino Resort, Mohegan and the OLG on Tuesday announced one of the greatest singer/songwriter/composers of all time, Billy Joel, will perform at the grand-opening for the new OLG Stage at Fallsview Casino on February 25, 2023.

A press release said Joel’s “history-making performance” will mark “the next chapter in the songwriter's longstanding relationship with Mohegan.”

One of the biggest concert draws in the world, Joel has sold over 160 million records worldwide. He is also the recipient of six Grammy Awards, including the prestigious Grammy Legend Award. Joel has been inducted into the Songwriters Hall of Fame, the Rock and Roll Hall of Fame, and has received numerous industry awards, including a Tony for “Movin’ Out,” a Broadway musical based on Joel’s music.

The press release said, “Billy Joel has been entertaining crowds with his music and incredible on-stage presence since 1972. His hits include ‘Big Shot,’ ‘Piano Man’ and ‘It’s Still Rock and Roll to Me,’ to name just a few – and he has performed at the world’s most prestigious venues, including a 10-show residency at Mohegan Sun Arena. The award-winning venue, located at Mohegan’s flagship property in Uncasville, Connecticut, played host to Joel’s first-ever residency that drew more than 100,000 people to witness the living legend first-hand.”

“From the time we opened the conversation about bringing a world-class venue to Niagara, we knew the OLG Stage at Fallsview Casino was going enhance the entertainment landscape of Niagara,” said Richard Taylor, president of Casinos Niagara. “Today, with this announcement of a true Rock and Roll Hall of Famer and cultural icon as our grand-opening act, we are achieving that goal.”

He added, “Niagara Casinos has always had amazing performances and, in partnership with Mohegan, will continue to raise the bar in entertainment.”

The press release said, “Mohegan, the service provider for Fallsview Casino Resort and Casino Niagara, has long delivered top-notch performers. When it comes to live music and entertainment, top headlining concerts and premier sporting events, Mohegan is the leader in entertainment and award-winning venues.”

Mohegan CEO and President Ray Pineault said, “At Mohegan, we are no stranger to securing world-class performers and providing bucket-list caliber entertainment for our guests. The grand-opening performance at the OLG Stage at Fallsview Casino will be no exception. We look forward to watching our old friend grace the stage at this show, and to the many inspiring, exhilarating, unforgettable performances that will undoubtedly follow.”

On Aug. 31 of this year, Ontario Lottery and Gaming Corp. (OLG) and Mohegan announced a new partnership to name the entertainment center the OLG Stage at Fallsview Casino.

“OLG is very excited to showcase the spectacular new OLG Stage at Fallsview Casino with an incredible award-winning performer like Billy Joel for the grand-opening celebration,” said Duncan Hannay, OLG’s president and CEO. “This state-of-the-art, 5,000-seat entertainment center will draw world-class entertainment that will enhance the experience for residents and the growing number of visitors to the Niagara Region for years to come. The OLG Stage at Fallsview Casino is yet another great demonstration of OLG’s purpose to ‘Play for Ontario.’ ”

The OLG Stage at Fallsview Casino opened in October and has begun hosting world-class entertainment, including “Canada’s Got Talent,” +LIVE+ and The Lumineers. Upcoming shows include Blue Rodeo, Michael Bolton, Larry the Cable Guy, Don Felder and the Impractical Jokers.

New York’s quintessential son, Billy Joel is one of the greatest musicians of our time. Joel ranks as one of the most popular recording artists and respected entertainers in history. The singer, songwriter and composer is the sixth-best-selling recording artist of all time and the third-best-selling solo artist. Joel’s songs have acted as personal and cultural touchstones for millions of people across five decades.

Joel’s biggest hits include “Uptown Girl,” “Just The Way You Are,” “The Longest Time” and “Vienna,” among others. In 2016, the Library of Congress selected “Piano Man” for preservation in the National Recording Registry for its “cultural, historic, and artistic significance.”

Joel is also the recipient of six Grammy Awards, including the prestigious Grammy Legend Award. Joel has received the RIAA’s Diamond Award twice for “Greatest Hits Volume I & Volume II” and “The Stranger.” Joel was inducted into the Songwriter’s Hall of Fame, the Rock and Roll Hall of Fame, and has received numerous industry awards, including a Tony Award for “Movin’ Out,” a Broadway musical based on his music.

Joel has also performed alongside other music greats at two of Madison Square Garden’s most extraordinary benefit concerts – “12-12-12, The Concert For Sandy Relief,” which raised awareness and money for those affected by Hurricane Sandy; and “The Concert for New York City,” which was held to help aid 9/11 victims and heroes.

Overlooking the world-famous Horseshoe Falls, Fallsview Casino Resort is an award-winning resort that has been offering premier entertainment and superior guest service since 2004. Featuring a hotel with 372 luxury rooms and suites, Fallsview Casino Resort houses a large and impressive gaming floor with more than 3,500 slot machines and 130 gaming tables. Winner of the Wine Spectator’s Best of Award of Excellence for its two signature restaurants, Ponte Vecchio and 21 Club Steak & Seafood, this vibrant resort property also features a full-service spa and fitness center, the state-of-the-art 1,500-seat Avalon Theatre, the 5,000-seat OLG Stage at Fallsview Casino, dozens of dining and shopping options, and more than 30,000 square-feet of meeting and convention space. For more information, visit fallsviewcasinoresort.com, join on Facebook, Twitter and Instagram @fallsviewcasino, or call 1-888-325-5788.