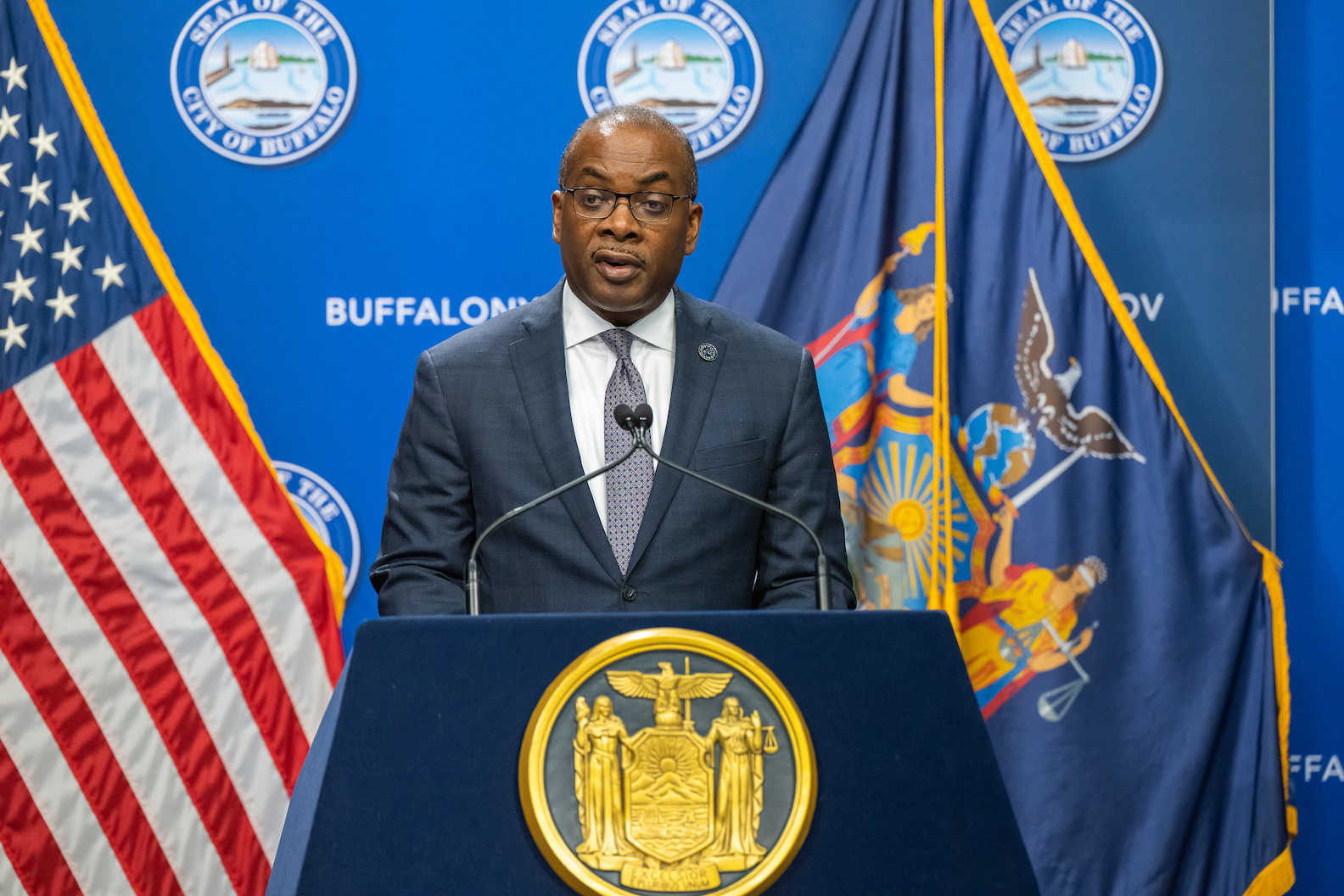 Gov. Kathy Hochul and Buffalo Mayor Byron Brown on Friday announced the establishment of the May 14th Memorial Commission in response to the mass shooting at a Tops Friendly Market on Jefferson Avenue earlier this year. The commission will develop and advise on a plan to site and build a physical memorial in east Buffalo to memorialize the life and legacy of the residents lost that day.

"Five months ago, 10 Black Buffalonians were senselessly slaughtered solely because of the color of their skin, and through the May 14th Memorial Commission, we are ensuring that their lives and legacies are honored," Hochul said. "The May 14th Memorial Commission will create a lasting reminder of the losses we experienced that awful day. While we combat racism in all forms and work towards a future where hatred and bigotry are a thing of the past, the commission, led by Rev. Mark Blue and supported by partners like Mayor Brown, will have a leading role in uplifting the east Buffalo community."

Mayor Brown said, "Our community was deeply affected by the events of May 14, 2022, and the May 14th Memorial Commission will bring transformative ideas to the forefront that will aid in the healing and create a symbol of remembrance. I look forward to working with the governor and the May 14th Memorial Commission to build a memorial for the 10 innocent members of our community who were killed in this racially motivated mass shooting. I thank Gov. Hochul for prioritizing the establishment of this commission, which will be crucial in helping our city heal from this tragedy."

The May 14th Memorial Commission will eventually consist of 11 members, six of which were announced Friday, including the chair. Hochul and Brown announced Buffalo National Association for the Advancement of Color People President Rev. Mark E. Blue was appointed to serve as chair. The following community members were appointed to serve on the commission:

The governor and mayor also announced the selection process to seat the remaining commission members will consist of combination of east Buffalo community members, as well as leaders in civic and cultural life, and be “representative of the full diversity of Buffalo's Black communities.”

With respect to its charge, the commission will focus on the following topics:

New York state and the City of Buffalo also announced an intent to make specific financial commitments to the project in the future, with the amount to be determined based on scope and scale of projects recommended by the commission, and in concert with state legislative partners. The commission will also explore securing additional private contributions.

Earlier this year, Hochul announced $50 million of targeted investments as part of the state's ongoing efforts to address the immediate needs in wake of the shootings. Hochul’s team said New York state will continue to coordinate with city, county, philanthropic and business partners, and grassroots leaders to address long-term needs in the community.

Blue is an east Buffalo native who has made the fight for racial equity and justice his lifelong priority. A pastor at Second Baptist Church since 2001, Blue has previously served as president of the Baptist Ministers Conference of Buffalo and Vicinity for the past decade. Six years ago, he became president of the Buffalo Branch NAACP. He is currently in his second term as the branch president, where he continues to help address racial disparities and inequities in the Buffalo community. In this capacity, Blue also serves on the Erie County Industrial Development Board and sits on the president’s advisory committee of Buffalo State College.

Assembly Majority Leader Crystal Peoples-Stokes said, "We will never forget the pain, fear and horror our community felt on May 14. We will also never forget how Western New York banded together to honor the victims and serve Buffalo's east side in the aftermath of the racially motivated mass murder. I applaud Gov. Hochul and Mayor Brown for establishing the May 14th Memorial Fund. I hope this memorial will commemorate those we lost and celebrate the resilient nature of our historic community."

Erie County Executive Mark Poloncarz said, "A permanent memorial to honor the lives that were taken from us on May 14th will make a lasting, fitting tribute to these men and women and reaffirm that they will always be in our hearts and in our memories. I am confident that the May 14th Memorial Commission will be in good hands with Rev. Mark Blue as chair, continuing the healing process for our community."

Erie County Legislature Chair April Baskin said, "In the wake of the shocking, senseless massacre of our friends and neighbors, we have all tried to come to terms with the enormity of the loss our community suffered. This memorial has the potential to create a space to center our grief and to allow us to begin to heal. I thank Gov. Hochul and Mayor Brown for organizing this commission and having the foresight to appoint the Rev. Mark Blue as its chair."

Buffalo Common Council President Darius G. Pridgen said, "The tragic events of May 14 radically impacted and changed the lives of 10 families who lost their family members, three families that survived the attack, and countless others who are still recovering mentally from the events on that day. This Memorial Commission has the opportunity to continuing the healing process with a proper memorial, that will assist us in remembering those who lost their lives.”

Buffalo Common Council member Ulysees O. Wingo Sr. said, "I believe the involvement of the president of the NAACP Buffalo Branch will provide the needed historic collaborative advocacy that bolsters the Black voice in America. Appointing President Mark Blue to the May 14th Memorial Commission sends a clear and resounding message that Black voices cannot and will not be silenced.”

Blue said, "I am deeply honored to be appointed by Gov. Hochul and Mayor Brown to serve as chair of the May 14th Memorial Commission. We are committed to erecting a permanent memorial that will honor the lives and memory of the innocent victims of this horrific attack. I look forward to working with all community stakeholders to ensure that this memorial is inclusive and is a lasting tribute that helps our community heal."