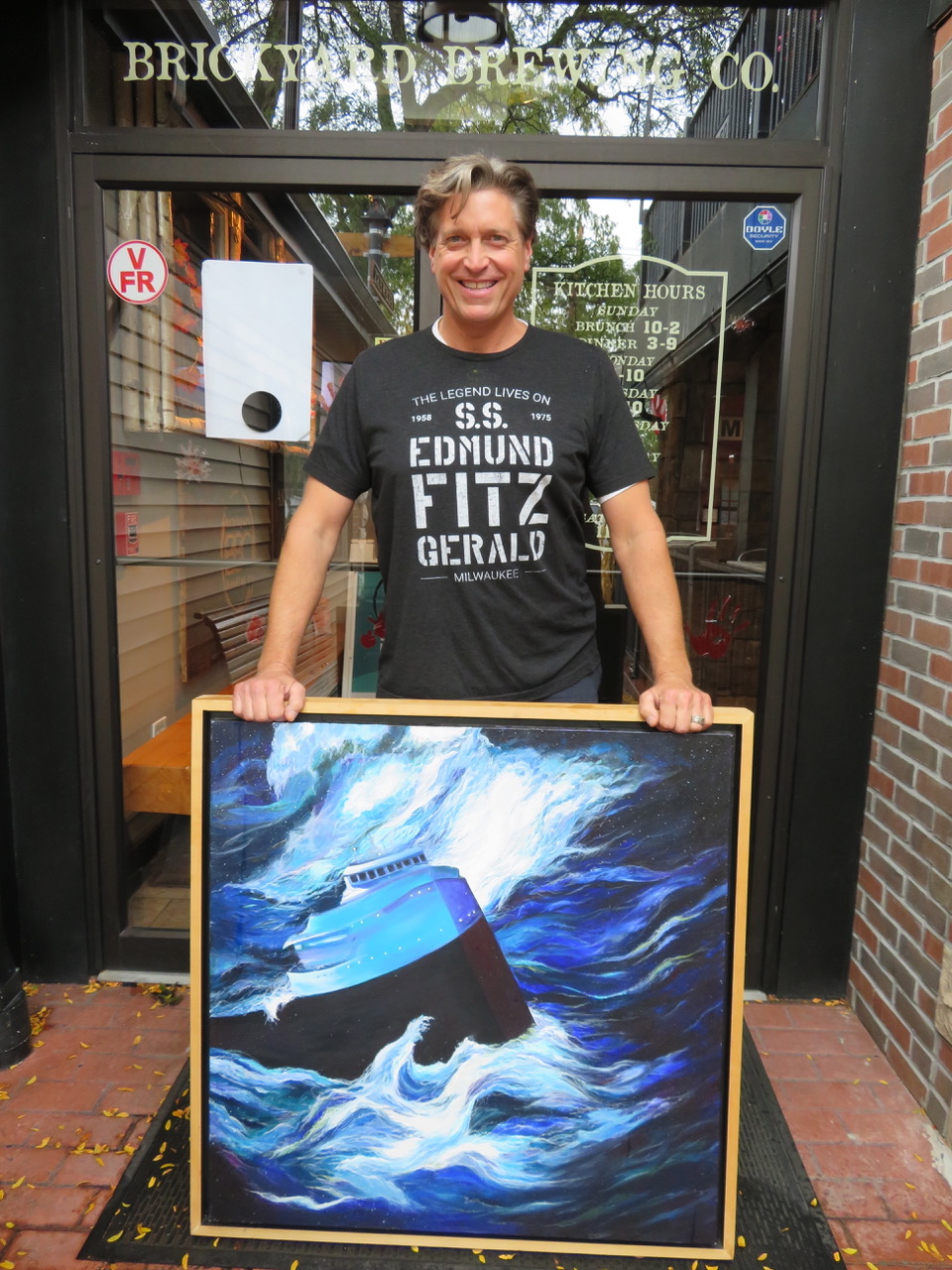 Thomas Paul Asklar, with his painting, in front of the BBC. (LCA photo)

'A Tribute to the Edmund Fitzgerald' at Brickyard Brewing Company

The legend lives on.

At 7:10 p.m. Thursday, Nov. 3, the Lewiston Council on the Arts will present the ninth annual "A Tribute to the Edmund Fitzgerald" fundraiser at the Brickyard Brewing Company, 436 Center St. This multisensory and multimedia tribute will be hosted by artist and Edmund Fitzgerald enthusiast Thomas Paul Asklar, who will commemorate the 47th anniversary of the disaster.

Organizers said, “The SS Edmund Fitzgerald, also known as the ‘Mighty Fitz,’ was an American Great Lakes freighter that sank in a Lake Superior storm on Nov. 10, 1975, with a loss of the entire crew of 29.”

The evening begins at the time of the final radio communication of Capt. Ernest McSorley, before the “Mighty Fitz” went down. At that time, he stated, “We’re holding our own.”

There will be a brief presentation by Asklar explaining the ship's history, the timeline of the tragedy, and theories of its destruction. The event will showcase a model of the Edmund Fitzgerald by “Commodore” Justin Higner, founder of Higner-Maritime Artworks, who will read off the names to honor each soul of the 29 crewmembers. Artifacts will be displayed, and Jim Rankin will provide a bagpipe tribute.

Internationally renowned musicians Bruce Wojick, Jamie Holka, Dave Thurman and special guest Jeremy Hoyle, lead singer of Strictly Hip, will perform songs with a nautical theme, as well as music from the “Mighty Fitz” era. The centerpiece will be Gordon Lightfoot’s most famous musical tribute, the "Wreck of the Edmund Fitzgerald.”

Master brewers John Meteer and Tom Winter have created a special beer for the occasion, “Gitchegumee,” which Meteer describes as, “A golden lager meant to be drinkable, but never boring, brewed with barley grown and malted in the Great Lakes region. This beer is an ode to all things regional, and a tip of the cap to the ‘Mighty Fitz.’ ”

Artwork on “Gitchegumee” was created by designer Rob Hopkins, whom Asklar actually taught in kindergarten! On-tap and to go-options will be available.

This event is free for Art Council members, and $10 for the general public. No reservations are required, but organizers advise “get there early to get a good seat!”

The Mighty Fitz 5K Run is slated for 2 p.m. Saturday, Nov. 5, beginning in front of the BBC.

A press release stated, “The race will take runners through the Village of Lewiston, Artpark State Park, and along the Niagara River waterfront. There will be a postrace celebration and awards ceremony at the Brickyard following the race with food, ‘Gitchegumee’ beer specials, special-edition ‘Mighty Fitz’ commemorative T-shirts, and live music by Zak Ward.”