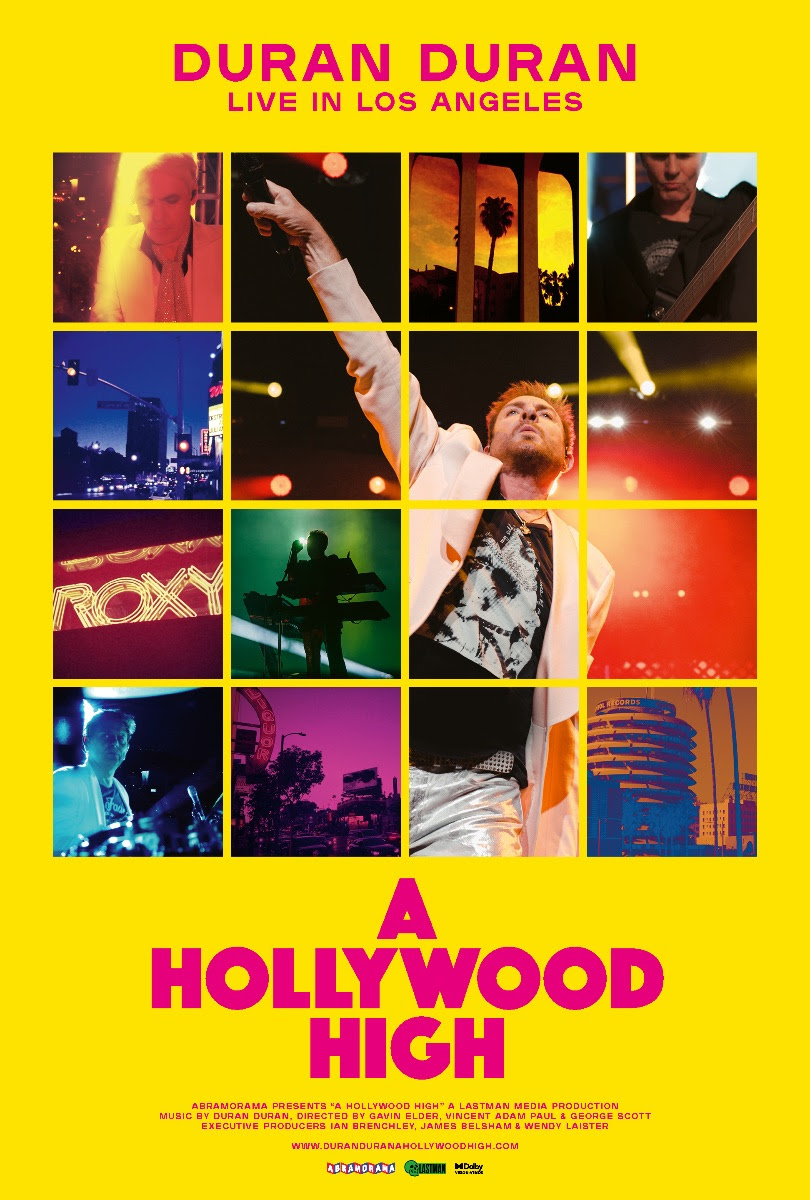 Global rollout on Nov. 3 in over 40 countries, as Duran Duran celebrates 4 decades together

Duran Duran has confirmed details of a brand-new, 75-minute docu-concert titled “A Hollywood High.” The film captures the band performing live on a rooftop in Los Angeles, alongside exclusive interviews and archival footage that tells the story of a long-time love affair with the city. The film will be released Nov. 3.

A press release noted, “The news arrives amidst an incredible year for the band, as the multi-Platinum, award-winning global hitmakers celebrate over four rich and storied decades together.”

The past year has seen Duran Duran release an acclaimed 15th studio album, “FUTURE PAST;” be confirmed to be inducted into the Rock & Roll Hall of Fame; perform live at the Queen’s Platinum Jubilee concert at Buckingham Palace; headline London’s Hyde Park; and, in a full circle moment, close the opening ceremony of the 2022 Commonwealth Games in the band’s hometown of Birmingham. All this before embarking on a headline tour of North America that included sold-out shows at iconic venues such as New York’s Madison Square Garden and three nights at the Hollywood Bowl.

The press release continued, “Duran Duran’s peerless live show will now be immortalized on the big screen in a feature-length docu-concert film, created in an innovative new format that is mixed and mastered with Dolby Atmos and Dolby Vision. Giving fans the ultimate movie-going experience, Dolby Vision takes the look of the film to a whole new level, allowing audiences to enjoy subtle details and the ultra-vivid colors of the performance like never before, while Dolby Atmos provides the very best in truly immersive sound. The film also brings to life the band’s deep and important relationship with Los Angeles through exclusive new interviews, together with behind-the-scenes video and unseen archival footage, charting their rise to become one of the most successful and influential bands of all time.”

Keyboardist Nick Rhodes said, “For our first U.S. show in several years, we wanted to do something really special and intimate. After considering many options, a rooftop performance quickly became the frontrunner. It was post-pandemic, we had never done anything like that before, and we had just released a new album. Somehow it seemed like a magical doorway to the next part of our journey.”

Bassist John Taylor said, “Duran Duran have had an enduring relationship with the City of Los Angeles since the first time we came to America. We were determined to do something unique to celebrate our four decades together. A rooftop performance in L.A. with the Capitol Records building across the street and the Hollywood sign looming in the distance sounded perfect, and turned out to be an extraordinary night for all of us.”

“A Hollywood High” is directed by three award-winning industry veterans: Gavin Elder, Vincent Adam Paul and George Scott. Lastman Media and Magus Entertainment are executive producers. The film is distributed and released theatrically in cinemas around the world by Abramorama.

On Thursday, Oct. 27, the members of Duran Duran will attend a special premiere for the film at the Dolby Theatre in Los Angeles. This is the first time the long-standing Oscars venue has hosted a music film of this nature. A London premiere will follow on Tuesday, Nov. 1, at the Vue West End, in Leicester Square.

“Duran Duran has been entertaining the world with their creative genius and iconic songs over the past 40 years,” said Jed Harmsen, head of cinema and group entertainment at Dolby Laboratories. “We cannot wait for fans to not just watch ‘A Hollywood High,’ but to be captivated by experiencing it in Dolby Vision and Dolby Atmos.”

Shot from the unique perspective of the roof of The Aster in the heart of Hollywood, overlooking the Capitol Records building, the site of Duran Duran’s original record label home, the film “celebrates the breadth of Duran Duran’s prolific and diverse songwriting and captures their boundless live energy.”

“It’s an honor to work with Duran Duran to bring the band’s 40th anniversary celebration to cinemas and fans around the world, with the generous support of Dolby,” shared Evan Saxon, head of music and international distribution at Abramorama “ ‘A Hollywood High’ will sit alongside other successful films we have distributed for The Beatles, Dolly Parton, Bob Dylan, Pearl Jam, Green Day, Metallica, Jimi Hendrix, Miles Davis and Neil Young, among others.”

The press release concluded, “The concert film will provide an opportunity for fans across the globe to share a unique live experience and see a spectacular show from a front-row-seat perspective. Fans will be up on their feet dancing from the outset in cinemas all over the world.”