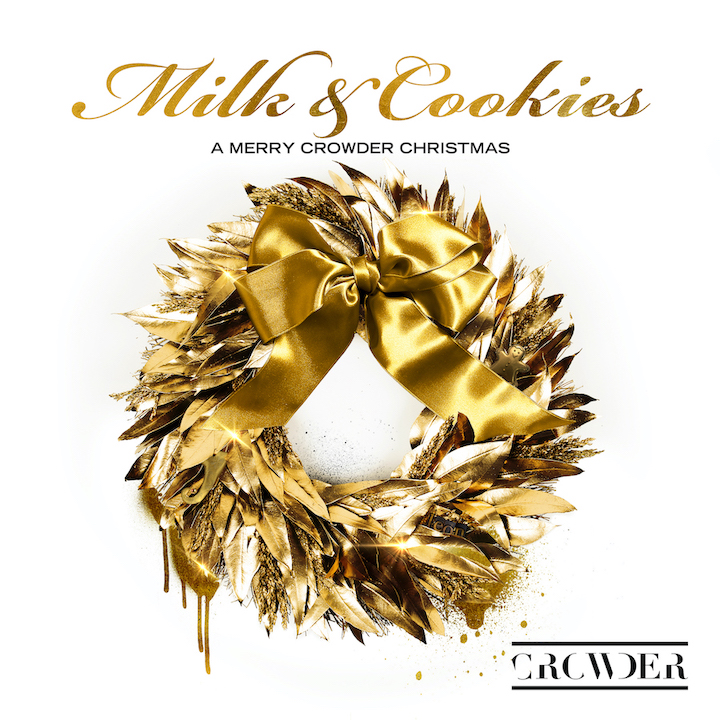 On Friday, Oct. 21, Grammy-nominated artist Crowder will release his Christmas album, “MILK & COOKIES: A Merry Crowder Christmas” (via sixstepsrecords/Capitol CMG). With a title that puts a seasonal spin on his lauded 2021 release “Milk & Honey,” the project is available for preorder here.

A press release stated, “Featuring a mix of festive originals, reimagined classics and creative collaborations, the 14-track project is complete with Crowder’s signature charm on multiple interludes scattered throughout, playing the role of an objective narrator that has become a staple of classic holiday films. Crowder’s energy, infectious personality and comedic timing are on full display throughout the record, including a tribute to the North Pole’s working class, ‘The Elf Song,’ and glimpse at the woes of Mrs. Claus in ‘The Ballad of Mrs. C (She’s Sick of the Beard).’

“Breathing new life into timeless Christmas songs through unexpected collaborations, Crowder taps Country Music Hall of Fame member Ricky Skaggs for a banjo-driven version of ‘Go Tell It On The Mountain,’ before being joined by rapper NF’s longtime producer Tommee Profitt on a booming, symphonic rendition of ‘Carol Of The Bells.’

“Other standouts on the record include “I’ve Heard About You,” a tender tribute to the reason for the season, which is available (now) as the first offering from the forthcoming project; the bluesy original ‘Christmastime Is Here’ and ‘December 26th (Auld Lang Syne),’ which finds the Texarkana native putting his own clever spin on the lyrics to the New Year’s Eve staple and adding a modern take to the centuries-old song.

“Closing the record with a laugh-out-loud twist on the classic children’s book “Goodnight Moon,” Crowder wishes “goodnight” to everything that fills the holidays with joy and cheer – including the “elves with their 401ks” and his “leftovers” in the fridge.”

With plans to hit the road to headline the K-Love Christmas tour, which kicks off in November and continues through December, Crowder is currently nominated for Song of the Year (“Good God Almighty”), Rock/Contemporary Song Of The Year (“Higher Power”), Pop/Contemporary Album Of The Year and Recorded Music Packaging Of The Year (“Milk & Honey”) at this year’s GMA Dove Awards. For more information on all things Crowder, visit crowdermusic.com.