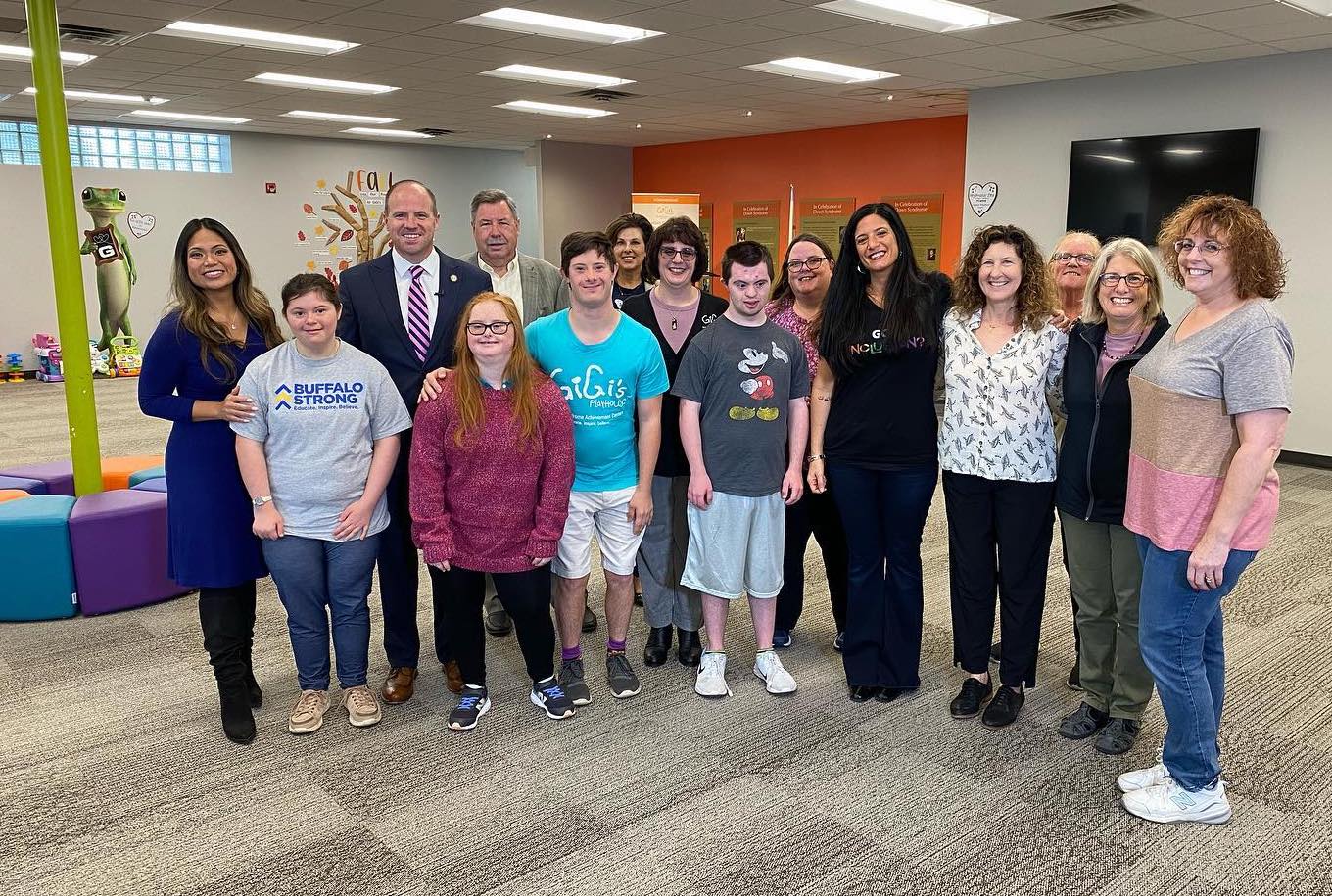 √ Funding will go toward delivery of programs, services & supports provided to individuals with Down syndrome and their families in Western New York

A press release stated, “Kennedy personally secured the money in the 2022-23 state budget after meeting with Mondschein and learning about the center’s mission to change the way the world views Down syndrome, and provide a community space to support individuals with Down syndrome and their families.

“Mondschein praised the funding as critical, and said it will go toward the delivery of programs and services provided to individuals with Down syndrome and their families in Western New York, and will help support the 200-plus local families the Down Syndrome Achievement Center serves every year.”

Established in 2002, and with more than 56 centers nationwide, GiGi’s Playhouse offers free therapeutic, educational and career training programs for more than 30,000 individuals with Down syndrome, spanning all ages.

The press release continued, “Originally established in the 1980s, Down Syndrome Awareness Month is set aside to raise understanding of Down syndrome and the amazing abilities people with the diagnosis have. Down syndrome is a condition in which a person is born with an extra chromosome, the packets of genes that determine how our bodies form and function. A baby is typically born with 46 chromosomes, but a baby with Down syndrome has an extra copy or part of a copy of one of those chromosomes, chromosome 21.”

Kennedy said, “As an occupational therapist, I was immediately drawn to the mission and the incredible support services that GiGi’s Playhouse offers to Western New York families. I know what these parents are going through as they seek out the best care and opportunities for their kids, and I understand how transformational a hands-on, community-driven space like this can be for the long-term growth of children with Down syndrome. I want to thank Emily and Will Mondschein for their tireless advocacy and their strong commitment to bring GiGi’s Playhouse to Western New York – it’s because of their leadership that this space exists. My office couldn’t be more thrilled to secure and deliver this funding, so that we as a city and region can continue to celebrate diversity, inclusion and acceptance.”

Emily Mondschein said, “We are so thankful for Sen. Kennedy and his efforts to secure this funding for the playhouse. Though our programs and services are provided to families free of charge, they aren’t free to deliver. We make a lifetime commitment to our participants – from prenatal diagnosis support for new parents through job and life-skills training when the kiddos become adults. We also work with area hospitals to ensure critical care is delivered to these individuals throughout their lives and with school districts to bring inclusive education practices into the classrooms. All these initiatives together create a holistic approach to helping people with Down syndrome be their ‘best of all,’ and we could not do it without champions like Sen. Kennedy.”

As part of Down Syndrome Awareness Month, Kennedy and GiGi’s are encouraging Western New Yorkers to take the "I Accept You" pledge, a commitment to being accepting, generous and kind. Individuals can take the pledge at www.gigisplayhouse.org.