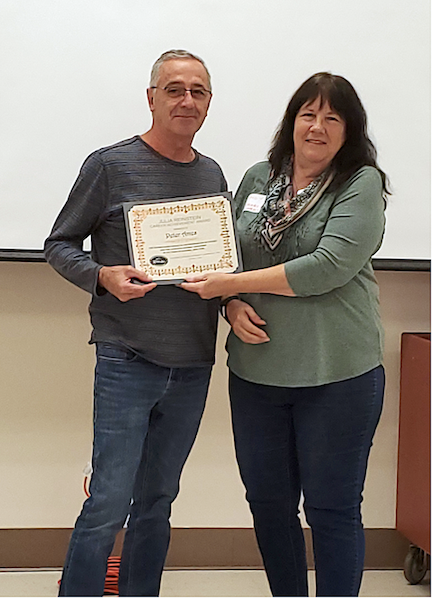 Reinstein was a Town of Cheektowaga historian who was honored for her long and devoted service to historians all across New York state. Pete's father, Donald Ames of Youngstown, received the award in 1999, and Pete’s predecessor in the Town of Niagara, Dorothy Rolling, won it in 2002.

After being appointed Town of Niagara historian in 2016, Ames inherited 24 boxes and tubs of a collection that included original ledgers going back to the formation of the town in 1812. The collection was in a storage pod in a town parking lot, with minimal access and no inventory. He convinced the town supervisor that those materials deserved a proper home, so the supervisor provided a small conference room in the Community Center at Veterans Park.

Over the next five years, Ames incorporated those materials into shelving units, file cabinets, etc. On Memorial Day weekend 2021, the town dedicated that room to his predecessor of 30 years, Dorothy Rolling, and her mother, who had served for 10 years in the 1960s. It is now called the Marsh/Rolling Local History Room.

That same weekend, Ames unveiled a World War II service cloth, which he had framed to display in the main room of the Community Center. He tracked down over 100 family members of the WWII service men and women listed, and invited them to the unveiling. One surviving WWII vet – whose name was on the cloth – attended the event.

Ames has spent the past three years working on Witmer Cemetery in his town. He and friends have put in a memorial garden, and cleared hundreds of feet of fence line. He worked with the Lions Club to replace some fencing, and added signage and benches. Ames is now researching the cemetery residents and resetting headstones. He also helped a local church in the next town to identify where old, unmarked graves may be, and suggested veteran markers where appropriate.

Over the past couple of years, Ames has coordinated the Hometown Hero banner program, and has almost 90 banners in place throughout the town from Memorial Day to Veterans Day. He advises other towns interested in starting such a project.

A few months ago, Ames was elected president of the Niagara County Municipal Historians Committee.

Ames said, “I love what I do, and it gives me a reason to get up every day and plug away at it.”