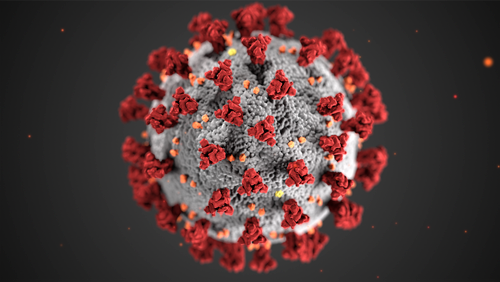 Image courtesy of the Centers for Disease Control and Prevention

If you’re an avid reader of science news, you’ve probably heard of viral proteins such as the COVID-19 spike protein.

Lesser known, perhaps, in the anatomy of viruses are a class of molecules called glycans. But these are important, too.

Glycans are complex carbohydrates that decorate the surface of viruses, and “every virus has a different distribution of carbohydrates,” says University at Buffalo engineering and medical researcher Sriram Neelamegham. As he explains, HIV uses glycans as a shield, employing these molecules to hide from virus-fighting antibodies. H1N1, a strain of the flu, leverages glycans to enter host cells, he adds.

And now, Neelamegham is among scientists illuminating the role that glycans may play in the function of SARS-CoV-2, the virus that causes COVID-19.

“We discovered that specific N-glycans seem to regulate the development and functional maturation of the SARS-CoV-2 spike protein,” Neelamegham says. “This is important because the spike protein is very important for viral entry into host cells.”

The study was conducted, in part, using artificially created replicas of the SARS-CoV-2 virus called virus-like particles (VLPs). The VLPs used in the research were designed to specifically prevent the formation of various N-glycans on the spike protein. During these investigations, modifications relating to N61 and N801 reduced the ability of VLPs to enter host cells by about 75%-85%, suggesting that these glycans are critical vulnerabilities of the viruses, according to the research.

While more research is needed to determine the exact reason why this happens, it’s possible that N61 and/or N801 may play a role in helping to fold the spike protein into the proper configuration, Neelamegham says.

In seeking to understand folding mechanics, his team investigated the roles of various intracellular carbohydrate-binding “chaperones” or “lectins” that assist with synthesis of the spike. These studies showed that a “chaperone” protein called calnexin, which facilitates this type of folding, regulates VLP entry into host cells. This is interesting, Neelamegham says, because calnexin is known to bind with N-glycans, though scientists aren’t sure whether calnexin interacts specifically with glycans at N61 and N801 or not, among other glycans.

The findings highlight N-linked glycans on the spike protein as potential drug targets for COVID-19. One next step in the research would be to validate the findings using appropriate animal models, Neelamegham says. The research also underscores the importance of investigating the role of glycans in additional diseases caused by viruses.

“Glycomics is a minor field compared to the study of proteins: More researchers are focused on proteins since the main targets of neutralizing antibodies are protein epitopes,” Yang says. “But our results show that these glycans are indeed important in terms of viral function in SARS-CoV-2. That’s why we choose to walk down this direction.”

Additional authors of the paper include research scientist Anju Kelkar, Ph.D., and students Anirudh Sriram, Ryoma Hombu and Thomas A. Hughes, all in the UB department of chemical and biological engineering. Neelamegham is a faculty member in departments within the UB School of Engineering and Applied Sciences; the Jacobs School of Medicine and Biomedical Sciences at UB; the UB Cell, Gene and Tissue Engineering Center; and the UB Clinical and Translational Research Center.

The research was funded by the National Center for Advancing Translational Sciences and National Heart, Lung and Blood Institute, both part of the National Institutes of Health, and by UB.