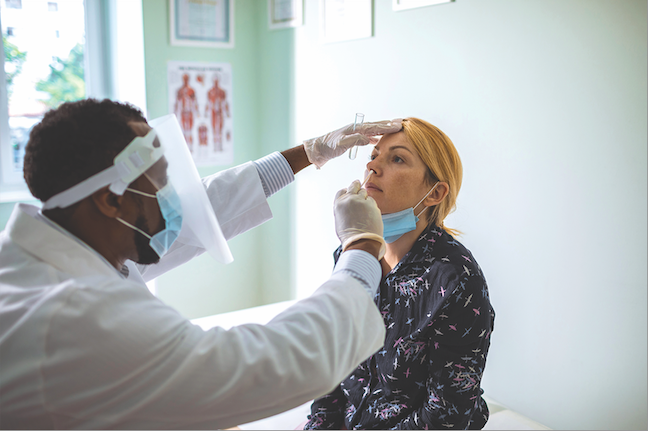 UB scientist: Best protection against COVID-19 could be a vaccine delivered through the nose

As public health experts cautiously anticipate how COVID-19 will play out this fall, a University at Buffalo scientist is reiterating that substantial immunity against the SARS-CoV-2 virus will only happen with a vaccine that can be delivered through the nose.

“The best protection against initial infection with the coronavirus, as well as transmission of it, as opposed to the development of COVID-19 disease, will be most effectively achieved by intranasal vaccines,” said Michael Russell, Ph.D., professor emeritus of microbiology and immunology in the Jacobs School of Medicine and Biomedical Sciences at UB and first author on a paper published last month in Frontiers in Immunology.

The reason, he said, is that the most robust immunity against COVID-19 comes about as a result of infection that takes place in the upper respiratory tract and the mouth, and gives rise to mucosal immunity through the secretion of Immunoglobulin A (IgA) antibodies.

“That kind of immunity is not induced to any great extent by the existing injectable vaccines,” Russell said. But, he said, mucosal immunity is exactly the kind of immunity that would protect against initial infection, instead of protecting against severe disease after infection, the goal of the current COVID-19 vaccines.

“It all results from a widespread lack of understanding of the operation of the mucosal immune system, despite the fact that this has been known about for at least 40 years, but is poorly covered in most medical curricula,” Russell said.

He noted evidence is accumulating that shows that mucosal IgA antibodies have a significant impact on acquisition of SARS-CoV-2, the subsequent course of disease, and further transmission of the virus.

Vaccines delivered through the nose would not only induce mucosal immunity and thus prevent individuals from becoming infected, but they could also suppress community spread, which results from the circulation of aerosol particles and droplets generated by these upper respiratory and oral secretions.

A Better Route to Herd Immunity

“Our main point, therefore, is that protection against initial infection (rather than protection against the development of COVID-19) and the onwards transmission of the virus will be more effectively achieved by intranasal vaccines,” Russell said. “In other words, the much-discussed and elusive accomplishment of herd immunity, which is not effectively generated by the existing injected vaccines, will be more likely to be achieved with mucosal immunity induced by intranasal vaccines.”

The paper also argues that, despite the fact that antibody responses to COVID-19 have almost entirely focused on serum, it turns out the level of antibodies that are circulating in the blood doesn’t reflect the antibody level in mucosal secretions. Meanwhile, mucosal IgA antibodies to SARS-CoV-2 antigens have been detected in the saliva, nasal fluids, tears, tracheo-bronchial secretions and even breast milk in infected individuals.

The authors conceded that, while there have been numerous animal model trials launched to develop intranasal vaccines against SARS-CoV-2, many haven’t continued past the preclinical stage. In part, they explained, this might be due to inadequate understanding of how the human and animal mucosal immune systems differ.

“Mucosal IgA antibodies found in secretions are much more effective at viral neutralization than circulating IgG antibodies, which are found in serum,” Russell said.

The authors noted that the success of the influenza vaccines delivered through the nose indicate that this is a feasible delivery method for a vaccine. A recent article in Nature reports that approximately 100 intranasal COVID-19 vaccines are in development worldwide, two of which were approved last week in China and India. However, details of the trials supporting these approvals have not yet been released.

Russell concluded: “If even a fraction of the time, effort and resources that were applied to the development of the first generation of COVID vaccines was applied to intranasal vaccines, the world might be benefiting from a widely available intranasal COVID-19 vaccine right now.”

Jiri Mestecky, M.D., Ph.D., professor of microbiology in the Heersink School of Medicine at the University of Alabama at Birmingham, is co-author.