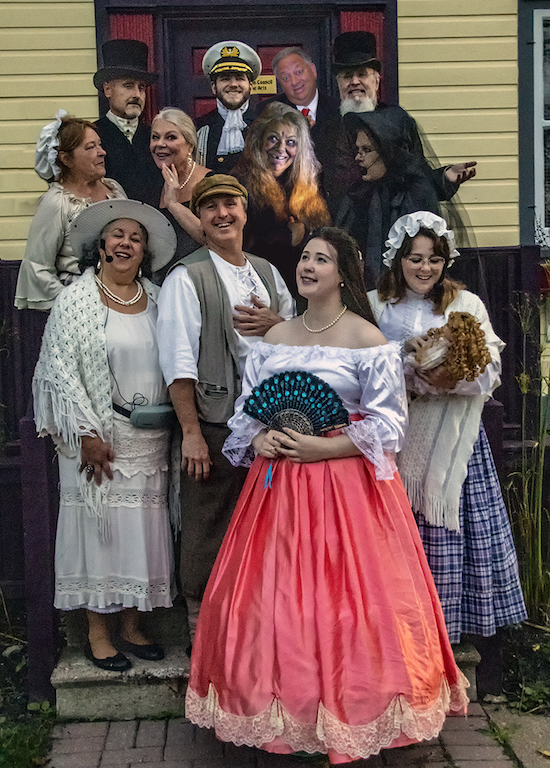 Marble Orchard Ghost Walks are back (from the dead)

The Lewiston Council on the Arts recently announced the return of its popular Marble Orchard Ghost Walks.

Organizers said, “Whether you're just out to have some fun or learn something of the paranormal, the Marble Orchard Ghost Walks showcase Lewiston's rough and tumble frontier past as well as its gloriously creepy present. Lurking behind Lewiston's serene facade lies a shadowy past filled with nightmarish spirits, ominous events and haunted buildings. The Marble Orchard Ghost Walks are one of WNY's most popular tourist attractions, unmatched when it comes to presenting both historical truths and ghostly legends.”

During the 90-minute walk, the Marble Orchard Players will take patrons back in time as they “share ghost stories, myths and tales of tragedy, crime, mayhem and murder, the grim and ghastly deeds of Lewiston's best ... and worse. You'll hear secrets, both funny and sinister, of events that happened a long time ago. Yesksksksksksksk ... apparitions and witches still haunt Lewiston.”

The Marble Orchard Ghost Walks begin promptly at 7 p.m. on Saturdays, Sept. 10 through Oct. 29. Guests can meet in the International Peace Garden at 476 Center St.

Tours cost $15 for adults and $5 for brave children under age 12. LCA members pay a discounted price of $10. This event is rain or shine. No reservations are necessary.

And, oh yes, be sure to bring a flash light. It gets dark early in the graveyard.

LCA continued, “The Marble Orchard Players are a family of talented volunteer actors that give every Saturday night in September and October to perform in this fundraiser that benefits Lewiston Council on the Arts.

“The cast includes Don Batalaris, as the gravedigger who saw Skedatti, the ‘Screaming Killer of Dogs’; Claudia Carnes as the oh, so proper Mrs. Smith, who knew all about William Morgan's murder; Anna Frankovitch as Frozen Charlotte, who froze to death because of her vanity; Tim Henderson as Josiah Tryon, who was inclined to follow a higher law than the law of the land … always follow his conscience … and the full moon; Justin Higner as Capt. James Van Cleeve, who cursed anyone who would bring harm to sailors on Lake Ontario; John Jacoby as Judge Sherborne Piper, the ‘Hangin" ’ judge; Lynda LaGreca as Nina Starkweather, the aging spinster with a broken heart; Marc Melzer as Rodney Dangerfield, who sets the tone with comic relief to a nervous audience; Eva Nicklas as Lewiston’s Queen Bee, Sally Tryon ... and Witch Hazel, who is eager to ride her broom home after the walk; Kathryn Serianni as Catherine Hustler, inventor of the cocktail, who will chill your bones with the story of the Sea Hag; and Lilu Wilson, as Mary Agnes, who was buried with her beloved baby doll so she wouldn’t be so alone.”

For more information, contact the Lewiston Council on the Arts at 716-754-0166, or visit www.artcouncil.org.