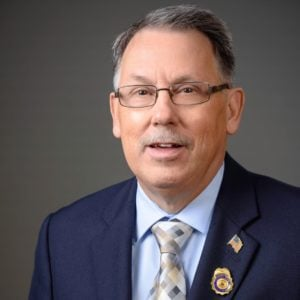 Submitted by the Firefighters Association of the State of New York

The Firefighters Association of the State of New York announced the election of Edward Tase Jr. of Lockport as FASNY president at its 150th annual convention in Westchester. He was sworn into office by FASNY Chaplain Emeritus Wayne Jagow of Wrights Corners.

Tase has served in a number of leadership roles within FASNY, most recently as first vice president. He was also a member of its board of directors, and now assumes new statewide responsibilities on behalf of New York’s volunteer fire service. Tase will serve a two-year term as president.

He said his top priority would be to increase the ranks of New York’s volunteer fire service by 10,000 new firefighters during his tenure at the helm of FASNY.

“For over a decade, FASNY has been leading the way in programs and legislative initiatives to increase the recruitment and retention of volunteer firefighters across the state of New York,” Tase said. “I want to take these efforts to the next level, and am calling upon the volunteer fire service, our fellow firematic organizations and our partners in state and local governments to help us meet this important goal of recruiting 10,000 new volunteer firefighters over the next two years. Working together as a team, I believe we can accomplish this ambitious and important goal.”

Tase said he believes the state’s youth are one of the keys to building up the ranks of the volunteer fire service. He wants to focus efforts on growing existing youth programs in the fire service, and adding new ones in places that do not currently have a youth component in their fire department or local area.

“The youth are our future – we need to keep delivering opportunities for our young people to see and experience the important work of volunteer firefighters and EMS providers,” he said. “We also need to bring more basic firefighter education and training into our high school programming across the state, allowing our young people to graduate high school with some of the necessary, lifesaving training required to be a firefighter already under their belt.”

In addition to the altruistic motivations of saving lives and protecting property, Tase seeks to explore and implement appropriate financial and economic programs to both encourage young people to join the fire service, as well as provide young firefighters with opportunities to continue serving their local communities.

“We need to be looking at the larger economic issues that are becoming barriers to our young firefighters staying in their home communities – things like access to affordable housing and financial incentives for service in the fire department,” he said.

Tase is lifelong resident of Niagara County and has been a member of the fire service for nearly 50 years.

He is a life member of the Frontier Volunteer Fire Co. in the Town of Wheatfield, where he joined as a junior member at age 14 years old. At Frontier, he has long been active in the operation and management of the company, holding a number of offices including trustee, financial secretary and recording secretary. Tase also serves as an active member of the South Lockport Volunteer Fire Co.

Tase has also been active in leadership of the Western New York Volunteer Firemen’s Association, which he joined in 1976.

At FASNY, Tase served on multiple committees, including membership, member services, budget, audit, legislative, resolutions and fire prevention and life safety. In addition, Tase served as the organization's print project manager and convention exhibit chairman, and as vice president of the FASNY Foundation.

Tase and his wife of 42 years, Linda, have two daughters, two grandsons and two granddaughters, all of whom reside in North Carolina.

Founded in 1872, the Firefighters Association of the State of New York (FASNY) represents the interests of the more than 85,000 volunteer firefighters and emergency medical personnel in New York. For more information, visit www.fasny.com.