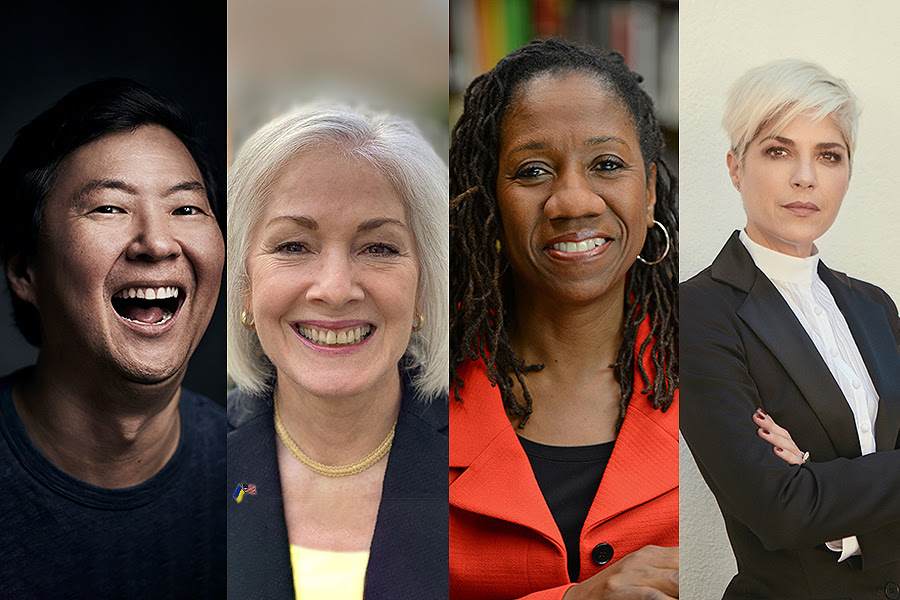 The University at Buffalo’s Distinguished Speakers Series returns for 2022-23 with a lineup of engaging, inspiring and entertaining speakers.

All talks will take place at 7 p.m. in the Mainstage Theatre in the Center for the Arts, North Campus.

“We take great pride in bringing some of today’s most resonant voices to UB through the popular tradition of our Distinguished Speakers Series,” said UB President Satish K. Tripathi. “Whether discussing society’s grand challenges, sharing personal testaments of courage, or providing a generous dose of comic relief, this season’s speakers promise to offer compelling, enlightened perspectives that are not to be missed.”

The series will kick off on Oct. 11 with a talk by actor, producer and writer Ken Jeong.

Jeong has established himself as one of today’s top comedic stars. Since his feature film debut playing the doctor in “Knocked Up,” Jeong has gone on to a number of memorable roles in a series of successful comedies, including “Role Models,” “Crazy Rich Asians” and all three installments of “The Hangover” franchise. His role as Mr. Chow in the first “Hangover” film earned him three Teen Choice nominations and an MTV Movie Award.

On television, Jeong starred on ABC’s “Dr. Ken,” which he also created, wrote for and served as an executive producer. He was a series regular on the critically acclaimed NBC show “Community,” and directed an ESPN “30 for 30” documentary “Student/Athlete.” He also produced the Sundance award-winning film “Advantageous,” which received a Film Independent Spirit Award nomination.

Jeong’s career path began on a different course. He earned his undergraduate degree at Duke University and went on to get his medical degree from the University of North Carolina. Jeong completed his internal medicine residency in New Orleans, all the while developing his comedy. He won the Big Easy Laff Off, and headed to Los Angeles at the urging of competition judges Brandon Tartikoff, former NBC president, and Improv founder Bud Friedman.

Jeong can be seen on Fox’s “The Masked Singer” and “I Can See Your Voice,” and will be a series regular in season 2 of Apple TV+’s “The Afterparty.”

Marie Yovanovitch will share her insights on the current crisis in Ukraine, as well as experiences from her 33-year career in the U.S. foreign service, during a talk on Nov. 15.

Yovanovitch served three times as a U.S. ambassador: to the Kyrgyz Republic (2005-08), the Republic of Armenia (2008-11) and, most recently, Ukraine (2016-19). She retired from the Foreign Service in 2020 and is currently a senior fellow at the Carnegie Endowment for International Peace, and a non-resident fellow at the Institute for the Study of Diplomacy at Georgetown University.

Born into a family that survived both Soviet and Nazi terror before emigrating to the U.S., Yovanovitch rose to the top of her profession in the crucible of the former USSR. Following early assignments in Moscow, London, Ottawa and Mogadishu, she served as deputy director of the Russia desk; and then as a career member of the senior foreign service, where she was named deputy chief in Ukraine.

Within the Department of State, Yovanovitch has worked on the Russia desk, the Office of European Security Affairs and the Operations Center. She also served as dean of the School of Language Studies at the Foreign Service Institute, U.S. Department of State, and as the deputy commandant and international adviser at the Dwight D. Eisenhower School for National Security and Resource Strategy, National Defense University.

In early 2022, her memoir, “Lessons from the Edge,” was an instant New York Times best-seller.

As the leader of the LDF from 2013-22, Ifill – now president and director-counsel emeritus – increased the visibility and engagement of the organization in litigating cutting-edge and urgent civil rights issues, and elevating the organization’s decades-long leadership fighting voter suppression, inequity in education and racial discrimination in the criminal justice system.

For more than 20 years, Ifill taught civil procedure and constitutional law to thousands of law students, and pioneered a series of law clinics, including one of the earliest law clinics in the country focused on challenging legal barriers to the reentry of ex-offenders, at the University of Maryland School of Law in Baltimore.

A prolific scholar, Ifill has published academic articles in leading law journals, and op-eds and commentaries in major newspapers. Her highly acclaimed 2007 book, “On the Courthouse Lawn: Confronting the Legacy of Lynching in the 21st Century,” is credited with laying the foundation for contemporary conversations about lynching and reconciliation.

She is a recipient of a 2021 Spirit of Excellence Award from the American Bar Association, and recently received the ABA’s Thurgood Marshall Award; in October, she will receive the prestigious Brandeis Medal, named for Supreme Court Justice Louis D. Brandeis and awarded by the Brandeis School of Law at the University of Louisville to recipients whose lives reflect a commitment to individual liberty, concern for the disadvantaged and public service.

This year’s series will conclude on March 15 with a talk by actress, author and advocate Selma Blair. Her longstanding and versatile career began with roles in such pop culture classics as “Cruel Intentions,” and she is perhaps best known for her scene-stealing performance as Vivian Kensington in the romantic comedy “Legally Blonde,” alongside Reese Witherspoon. Other film credits include “The Sweetest Thing,” Guillermo del Toro’s “Hellboy” and “Hellboy II: The Golden Army,” and the comedy/horror thriller “Mom and Dad,” alongside Nicolas Cage.

On television, Blair starred as Kim on NBC’s “Kath & Kim” from 2008-09, and has made memorable guest star appearances on such shows as “Friends,” “Another Life,” “Heathers,” “Portlandia” and “Web Therapy.”

Blair was among the Silence Breakers of the #MeToo movement selected as TIME magazine’s “People of The Year” in 2017.

In May, Blair released her first memoir, “Mean Baby,” in which she documents an addiction to alcohol, her devotion to her brilliant and complicated mother, the moments she flirted with death, and her diagnosis with multiple sclerosis.

Her journey with MS is also documented in the film “Introducing, Selma Blair,” which premiered to rave reviews at the 2021 SXSW Festival, where the feature won the Special Jury Recognition for Exceptional Intimacy in Storytelling.

The film also won the New York Women in Film & Television Documentary Award at the Hamptons Film Festival and received three Critics Choice Documentary Award nominations, including Best Documentary Feature. After opening in theaters in fall 2021, it was subsequently released on Discovery+ and is currently streaming on the platform.

Tickets may also be purchased at the Center for the Arts box office. Information on how UB students may access tickets will be provided online before each lecture.

UB’s Distinguished Speakers Series has been bringing the world to UB audiences for more than 35 years.

Speaker and ticket information can be found on the Distinguished Speakers Series website.