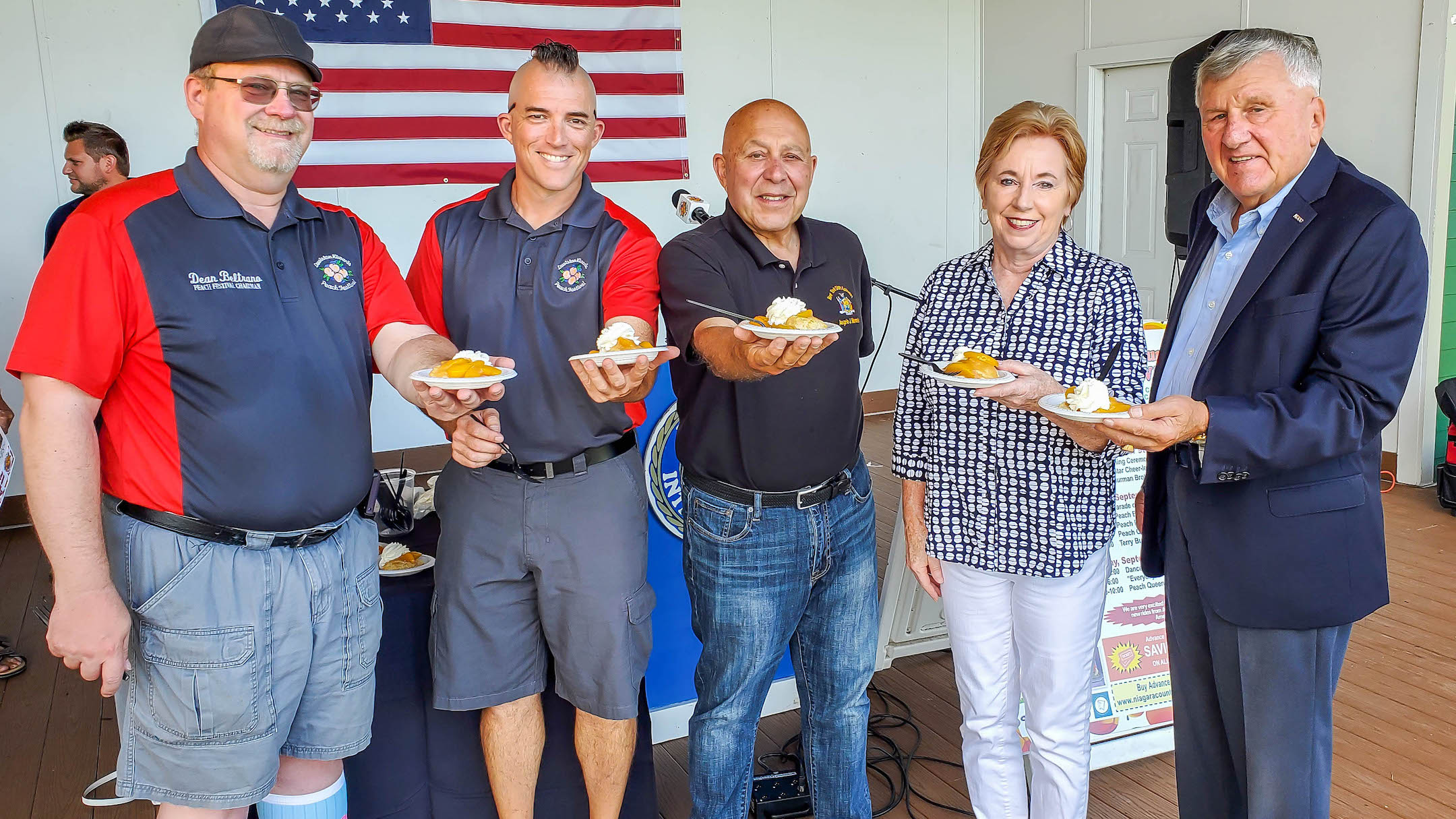 2022 Niagara County Peach Festival to be held Sept. 8-11 at Academy Park in Lewiston

The Kiwanis of Lewiston on Friday held a press conference at Academy Park in Lewiston to announce what’s new at the 64th annual Niagara County Peach Festival. The four-day event returns to this site Sept. 8-11.

Beltrano said he estimates a crowd of 40,000 over the weekend, weather-permitting. He detailed the schedule – which includes live entertainment and the Peach Queen scholarship pageant – and also announced the Peach Festival 5K Run has returned. It will take place at 7 p.m. Thursday, Sept. 1, starting and finishing at Kiwanis Park. For more information on the 5K Run, go to peachfestival5k.itsyourrace.com/event.aspx?id=119.

Pauly presented DiMino Tops Lewiston owner Anthony DiMino with the Buster Lombardi Memorial Community Service Award. The accolade is given to a non-Kiwanian for their dedication to the community and civic-minded actions. DiMino renovated the Academy Park stage in honor of his late father and co-founder of DiMino Tops, Alphonso I. DiMino.

Gismondi announced there will again be free parking available to all festival attendees at that upper Artpark lot. Greyline Tours shuttle buses will provide courtesy rides from the Artpark upper lots to Academy Park. 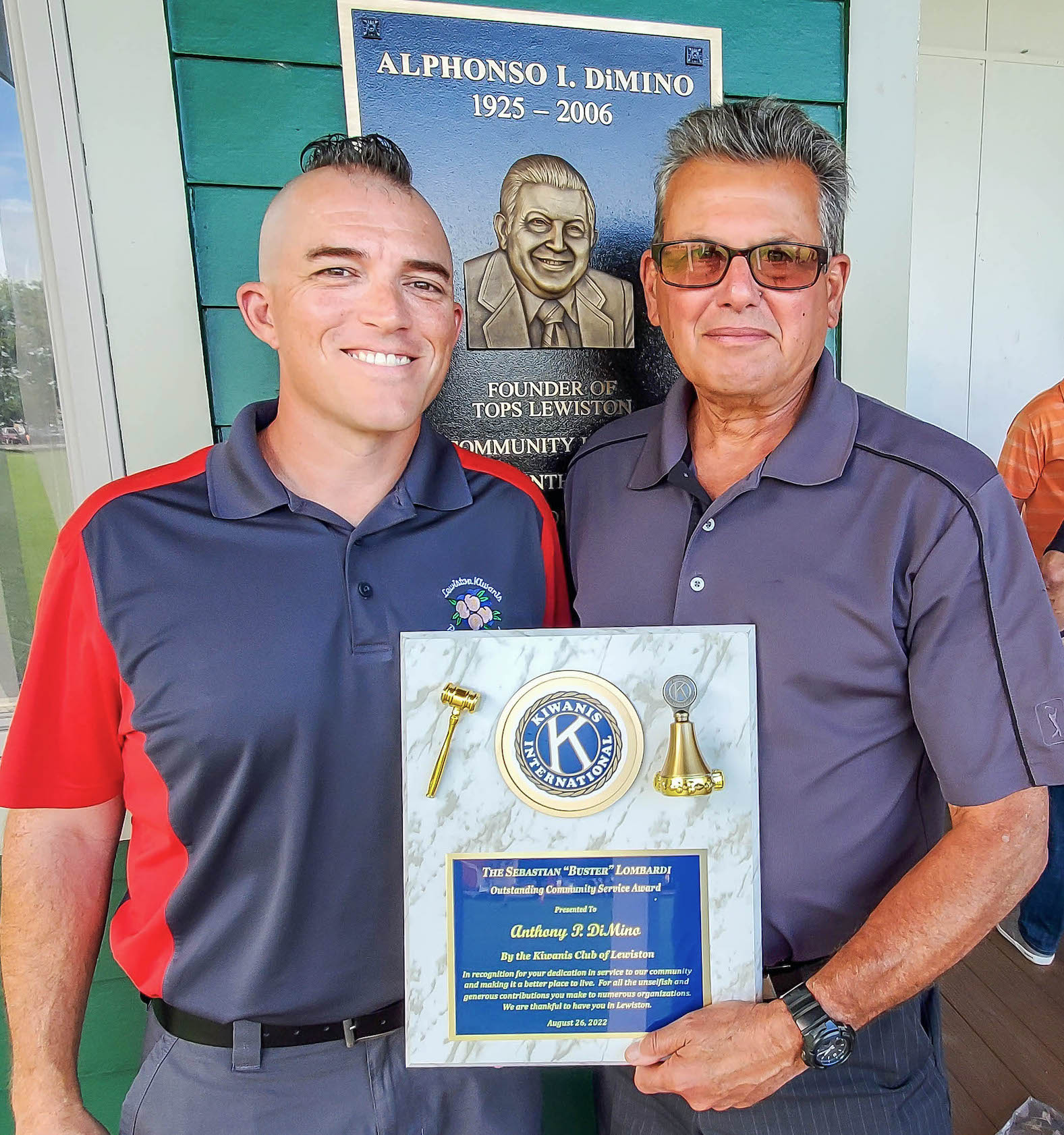 The “Peach Taste Off” on Thursday, Sept. 8, will feature a competition of home-made peach desserts on the Academy Park stage at 5:30 p.m. The “Peach Taste Off” features recipes submitted in the categories of “Food Enthusiast,” “Culinary Student” and “Children Recipe.” Judges include NCCC President William Murabito; chef Cathy Baron, who is the Niagara Falls Culinary Institute coordinator of baking and pastry; and Webster’s Bistro head chef Mark Mistriner.

The “Peach Taste Off” competition is sponsored by the Niagara Falls Culinary Institute, the Niagara Gazette and Niagara Frontier Publications. Prizes include dinner certificates to Savor Restaurant and a $100 Wegmans gift card.

Also on opening night is a meet-and-greet with costumed characters courtesy of the Superhero Alliance.

Amusements of America will again be the ride company at the Peach Festival, supplying thrill rides and family-friendly adventure for all ages.

Opening ceremonies will be held at 5 p.m. Friday, with a rendition of both the American and Canadian national anthems. At 5:30 p.m., an All-Star Cheerleading Competition will be held on the Alphonso I. DiMino Memorial Band Shell stage, with local units representing youth football and all-star cheering squads. At 8:30 p.m., The Thurman Brothers Band will take the stage and play until the 11 p.m. closing.

Saturday morning will feature the Peach Festival parade on Center Street. This year’s parade begins at 11 a.m. and will feature more than 100 units and 13 marching bands – an all-time high. Returning as parade announcer is long-time radio personality Brandy Scrufari.

The Peach Blossom and Peach Fuzz contests for the youngsters will also take place Saturday on the Academy Park stage, at 2:30 and 4:30 p.m., respectively. Peach Queen contestants will conduct a fashion show there at 6 p.m. Then, the popular “Tribute to Elvis” with Terry Buchwald will take place at 8 p.m.

On Sunday, the stage schedule includes a dance showcase from noon until 2 p.m., followed by Everyday People at 3 and 7 p.m., and the finals for the Peach Queen competition.

This year, 14 girls from Niagara County will vie for the crown and a $4,000 scholarship awarded by the Kiwanis of Lewiston. Hostess for the Peach Queen finals will be WGRZ-TV news anchor Maryalice Demler.

The 2022 Niagara County Peach Festival is presented by Modern Disposal, sponsored by the Kiwanis of Lewiston, WGRZ-TV, 97 Rock and the Niagara Falls Culinary Institute.

The Kiwanis of Lewiston again hired the ride inspection team of LJM & Associates to add a third level of safety inspections to the rides at this year’s Peach Festival. The rides are also inspected by New York state and Amusements of America.

Advance ride tickets are on sale at 40 locations throughout the greater Lewiston area, and at a discount. Find the full list at www.niagaracountypeachfestival.org/tickets.

The first Peach Festival was held in 1958 and, since then, the Kiwanis of Lewiston has contributed more than $1.5 million in donations to area charities and organizations from the event proceeds.