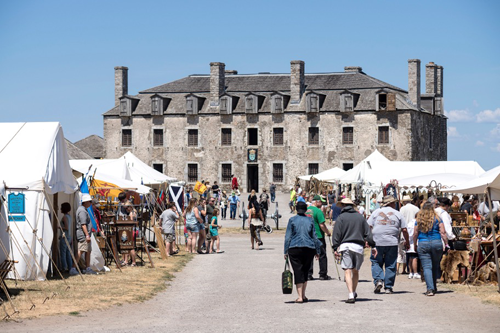 Nearly 100 reenactors and a nationally known historian will gather at Old Fort Niagara on Labor Day weekend to bring the War of 1812 to life. Richard V. Barbuto, who is both a retired Army lieutenant colonel and a Ph.D., will discuss the Battle of New Orleans at 2 p.m. Saturday, Sept. 3.

Barbuto is emeritus professor of history and served as the deputy director of the department of military history at the U.S. Army Command & General Staff College at Fort Leavenworth, Kansas. A 1971 graduate of the U.S. Military Academy at West Point, he served for 23 years as an armor officer with tours of duty in Germany, Korea and Canada. He also served as exchange instructor at the Canadian Forces Command and Staff College in Toronto. He has authored several books, including “New York's War of 1812,” “Niagara 1814: America Invades Canada” and “Long Range Guns, Close Quarter Combat.”

In addition to Barbuto’s presentation, the fort will present a series of living history programs between the hours of 10 a.m. and 4 p.m. both Saturday and Sunday. Activities include infantry and artillery demonstrations, clothing programs, living history camps and displays of women’s roles in the War of 1812.

A press release stated, “Old Fort Niagara began the War of 1812 in American hands. Just 1,300 yards away, across the Niagara River in Upper Canada, stood Fort George – a British-held post. The two forts exchanged cannon fire on several different occasions. In May 1813, Fort Niagara played a key role in the American capture of Fort George. By the end of the year, however, the Americans had abandoned Fort George and retreated to the U.S. side of the Niagara River.

“On Dec. 19, the British launched a predawn assault that captured Fort Niagara. The seizure of the fort opened the door for British forces to burn settlements along the American side of the Niagara from Youngstown to Buffalo. The fort remained in British hands until the end of the conflict, and was returned to the United States in May 1815 under the terms of the Treaty of Ghent.”

Reenactors will recreate the daily lives of soldiers and civilians of both sides during the event. Visit Old Fort Niagara’s website at oldfortniagara.org for more information and program details.