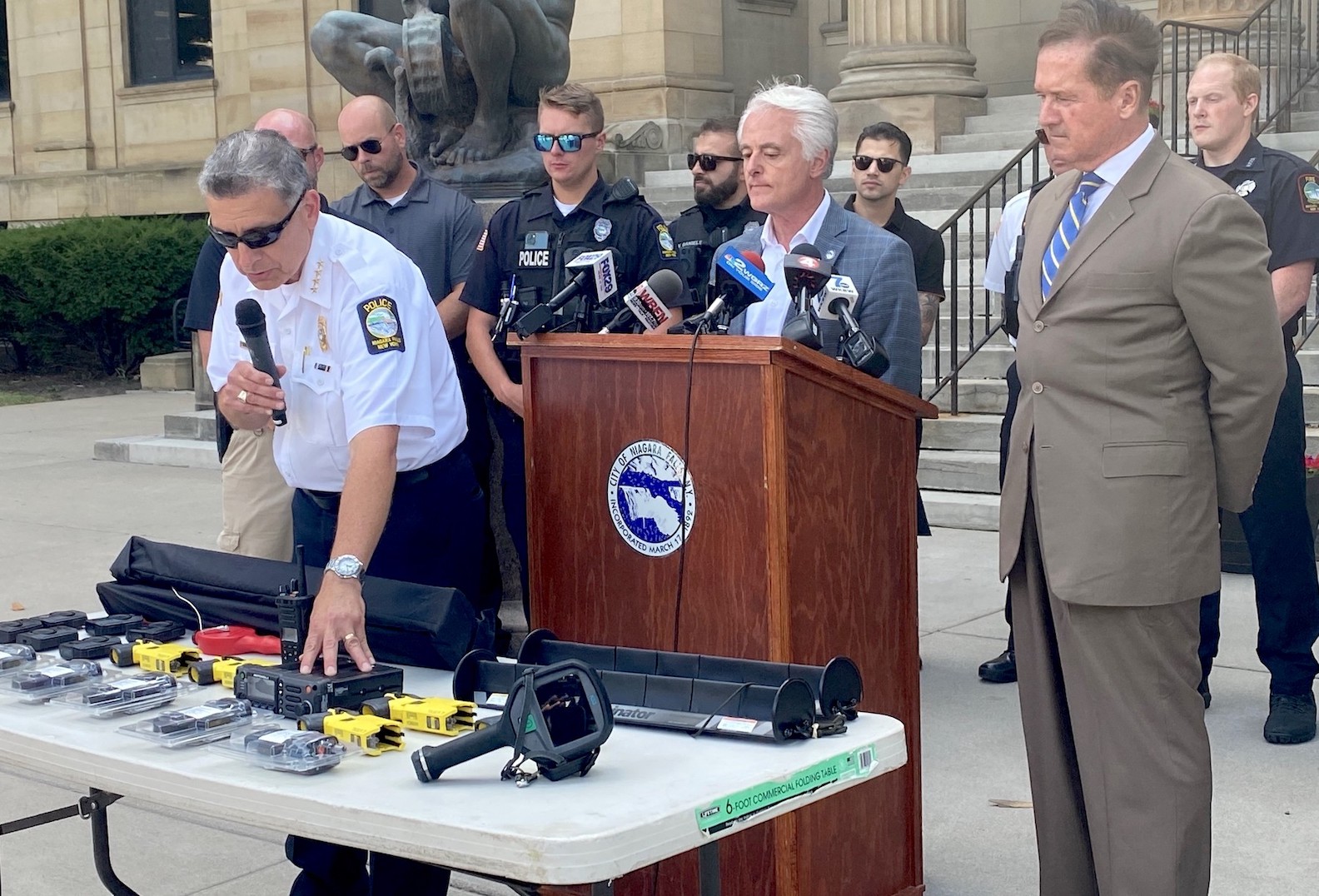 Congressman Brian Higgins and City of Niagara Falls Mayor Robert Restaino announced several public safety investments made possible thanks to the more than $57 million in federal funding received by the city through the American Rescue Plan. Niagara Falls has plans to invest over $11.4 million of its American Rescue Plan funding in public safety, including new and improved police and fire equipment.

“Communities stepped up to respond to the pandemic, and police and firefighters were among those on the front lines,” Higgins said. “American Rescue Plan funding is helping communities like Niagara Falls come back stronger than before, with investments that improve the safety of our first responders and the neighborhoods they serve.”

Restaino added, "For too long, our public safety professionals have suffered with inadequate and ineffective equipment. This is not only a disservice to the brave men and women who serve in these departments, but it makes it difficult for these professionals to do their job protecting and serving the public. Our administration has been committed to correcting that problem and, with the assistance of our American Rescue Plan funding, we are able to do that – and our city is thankful that our congressman and his colleagues supported local communities in that effort."

The mayor and City Council previously authorized purchases using a portion of the $11.4 million set aside by the city for public safety. That funding allowed for the purchase of seven thermal imaging cameras, air pack regulators, and five defibrillators for the Niagara Falls Fire Department as well as new vehicles, portable radios, and 90 body cameras for the Niagara Falls Police Department.

Separately, American Rescue Plan funding was set aside for improvements to city-owned buildings. Funding from that allocation is supporting replacement windows, doors and new HVAC units at fire stations.

New action by the City Council this week authorized another round of public safety investments.

For the fire department, an additional $33,400 in American Rescue Plan funding will support 35 new hoses and couplings, six mounted computers for fire trucks, and several pieces of equipment for fire scene illumination, documentation, and evidence collection, including a reciprocating saw, oscillating tool kit, lights, a gas detector and cameras.

With the $267,071 in newly approved funding, the NFPD will also purchase four additional vehicles, 30 patrol computers and docking stations, as well as 13 dash-mounted traffic monitors.

In addition, the city is creating two police substations located at the Doris W. Jones Family Resource Building and the Niagara Falls Water Treatment Plant. The substations will allow for added efficiency as police officers respond to calls.

Through a separate program, the City of Niagara Falls is helping local businesses protect their property. With American Rescue Plan funding, business owners can receive up to $700 toward security equipment.

Funding for state and local governments was approved in the American Rescue Plan, supported by Higgins and adopted by the House of Representatives in February of 2021, to help communities recover from the pandemic. Municipalities received half of the federal funding in May of 2021 and the other half in 2022.