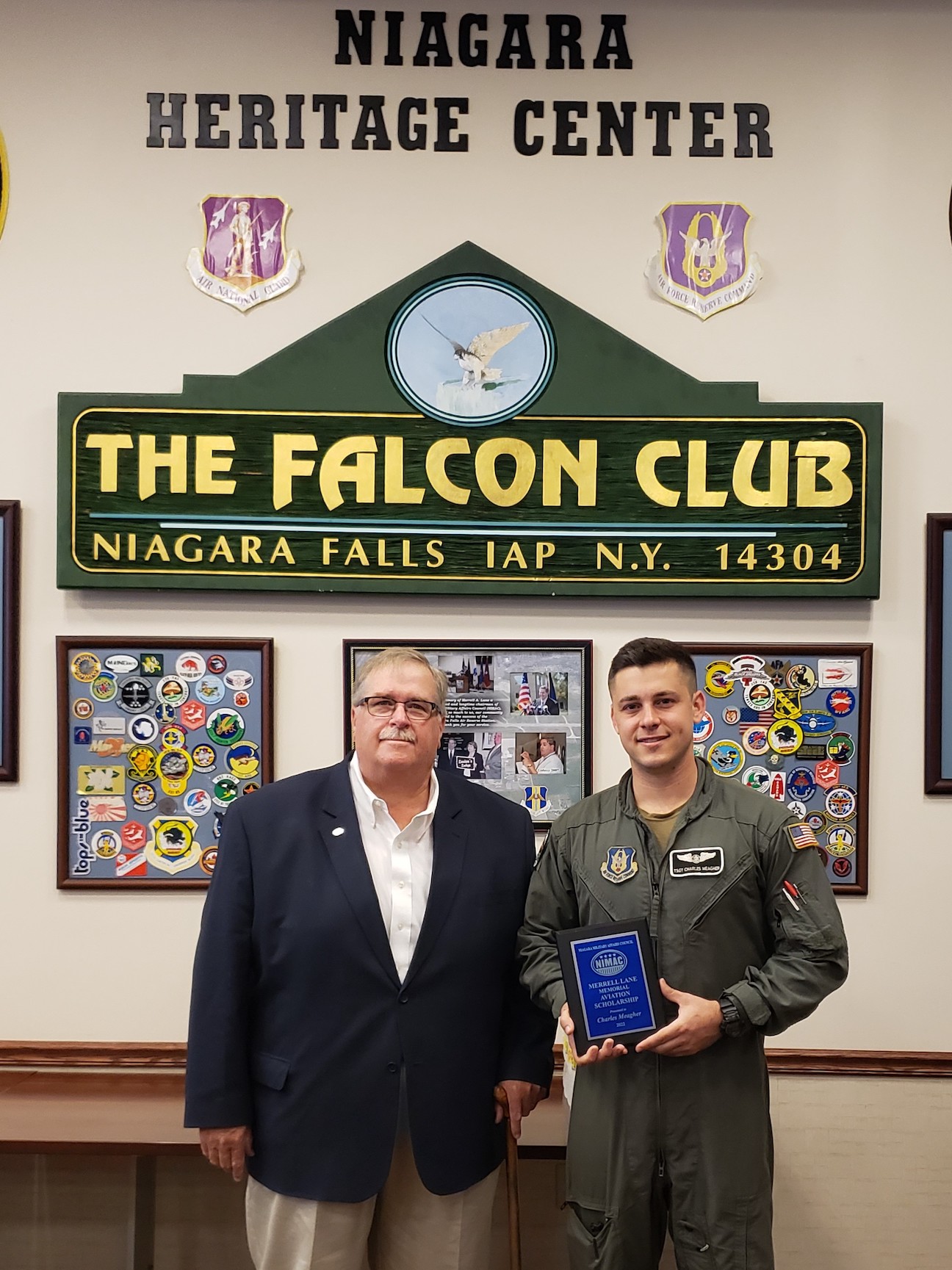 To honor one of its founders and longtime chairman, the Niagara Military Affairs Council (NIMAC) established the Merrell Lane Aviation Scholarship. At that time, in 2015, the United States Air Force was experiencing a pilot shortage and the scholarship was NIMAC’s way of helping fill that gap in any way that we could.

The purpose of the annual scholarship is to give enlisted service members assigned to the Niagara Falls Air Reserve Station (NFARS), who are in pursuit of an aviation-related career, an opportunity to enhance their aviation skills and knowledge – to enhance their ability to become a pilot in the Air Force Reserve, if they choose.

NIMAC has awarded its fifth scholarship named in honor of its former chairman, Merrell Lane. This year’s recipient, TSgt. Charles Meagher, is a boom operator. A “boomer” is responsible for operating the equipment in the KC-135 Stratotanker that connects to the "receiver" aircraft in flight for fuel transfer.

"I am ready to make the next step into becoming a pilot. My life riding in the backseat is coming to an end, and I am ready to take the controls,” Meagher said.

Each past enlisted service member who has received the scholarship has gone on in their respective careers in the Air Force Reserve to obtain their pilots licenses, attend Officer Training School, and/or further their careers in aviation.

"Merrell, who was an enlisted soldier himself, would be thrilled to know a scholarship in his name is has been instrumental in helping enlisted members to further their careers in aviation," said John A. Cooper Sr., chairman of NIMAC.

Scholarship committee chair, retired Col. Kurt Hammer, said, “Scholarships like this promote incentives for individuals to build successful aviation-related careers while also enhancing their military careers. From aviators to aircraft maintenance workers with power plant certificates, the skills gained in these fields are valuable – not just in aviation, but are transferable in many other industries, thus enhancing an individual’s growth and marketability, and creating a positive impact on the Niagara Falls Air Reserve Station.”

Cooper added, “The Merrell Lane Memorial Scholarship reflects the NIMAC mission to support the growth and prosperity of the NFARS and its personnel, creating a positive economic impact on the Western New York community. Working together with our members, strategic business partners and our community, we can continue to build and be the foundation of future missions.”