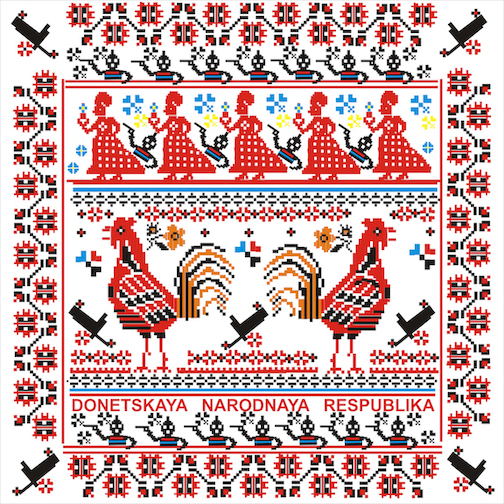 The Castellani Art Museum of Niagara University has announced a new slate of work.

“War is destructive to people and their cultural heritage. ‘Living Through War: Works from Kharkiv by Bella Logachova’ is a reaction against the war in Ukraine,” a press release noted. “Each work gives unique insight into the perspective of an artist living through the violence and destruction of her homeland.

“With this exhibition, the Castellani Art Museum of Niagara University strives to bring empathy and awareness to the war in Ukraine while supporting an artist and her country embroiled in conflict.”

“Living Through War” is sponsored by KeyBank in partnership with First Niagara Foundation.

CAM will exhibit nineteen of Logachova’s artworks from the ARtNUO (New Ukrainian Ornaments) Series, produced from 2014-22, along with a video of the artist. The exhibition will be on view Thursday, July 28, with an opening reception from 4:30-7:30 p.m. RSVP is required. The first hour is for Museum members and features a special curator tour. From 5:30-7:30 p.m., the public can explore the exhibition, hear remarks from co-curator Sabine Kutt and leadership from the Dnipro Ukrainian Cultural Center, and attend a short public gallery tour.

Combining imagery that is traditional to Ukrainian folk art, along with military icons and symbols, Logachova creates complex and narrative digital images. Through her intricate works, she describes various international events, including the current conflict in Ukraine starting with the 2014 Revolution of Dignity.

“Each work is a documentary story told by means of ornament. War time is difficult … but we need to do something, to create new things – it’s our responsibility,” Logachova was quoted as saying.

Logachova is a Ukrainian artist and photographer born in Mariupol in 1973. She graduated from the Kharkiv State Academy of Design and Art, where she currently teaches media arts. She is a co-founder of SOSka art group, including the Excess film group, in Kharkiv. She has exhibited her work throughout Europe and Ukraine.

CAM added, “Bella Logachova received wide recognition after the presentation of posters titled ‘ARtNUO – New Ukrainian Ornaments’ at the IX International Triennale ‘4th Block’ in 2015, for which she received the Grand Prix award of the festival.”

This exhibition at NU will be co-curated with Kutt of Sabine Kutt Photography. She is a photographer, art curator, choreographer and ballet master who was born and raised in East Germany and has resided in the U.S. since 2001. Kutt curates international exhibitions and special events, and currently represents women artists, including Logachova.

“The natural, joyful elements of the embroidery stand in sharp contrast to the military symbols Bella Logachova inserts into her images. Her art is like news. She is one of the few artists who are able to immediately implement what she has experienced in a creative way,” Kutt was quoted as saying.

Exhibition partner The Dnipro Ukrainian Cultural Center in Buffalo is providing project support, and lending traditional Ukrainian needlework for visual reference in the exhibition. The gallery will feature a QR code that allows CAM visitors to donate directly to Dnipro’s Ukrainian humanitarian and medical aid charity fund. From 11 a.m. to 5 p.m. Saturday, July 30, CAM will host a special Ukrainian Community Day of programming for Dnipro Center members (and the public) to visit “Living Through War.”

The Print Center (Philadelphia), in partnership with CAM, will feature a Logachova work during August as part of its “Windows on Latimer” series. It will also offer Logachova prints for sale; the artist will direct proceeds to support Ukraine. The Print Center, founded in 1915, represents printmaking and photography as vital contemporary arts, and is recognized as an international voice in print.