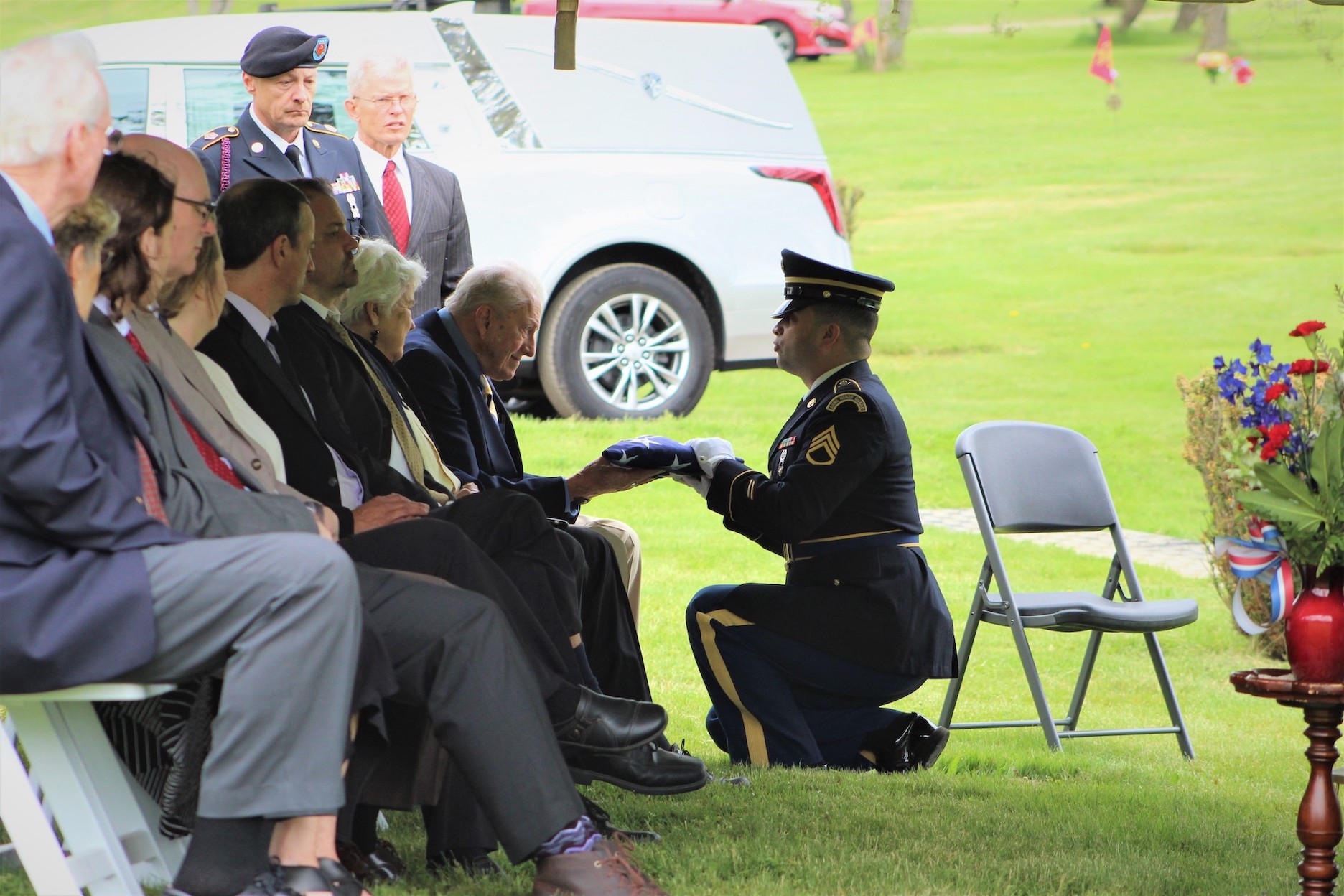 Nine members of the New York Army National Guard ensured that a Korean War soldier from Buffalo, who went unidentified for 70 years, was laid to rest with full military honors in Elmira on May 27.

"It was a tremendous honor to provide military honors for Cpl. Agard," said Sgt. Jedidiah "J" Estrada, an honor guard member from Horseheads.

"It is a huge honor every time we are able to provide these honors to military veterans," he added.

The Honor Guard team also provided support at the return of the remains to New York on Tuesday, May 24, at the Frederick Douglas Greater Rochester International Airport.

Bringing home and honoring those missing in action holds special meaning for the members of the team, said Sgt. 1st Class Ronald Thomas, the noncommissioned officer in charge for the return of remains.

"I've been on many of these over the years, and it is just awesome to be part of it," he said.

"My father and grandfather were Vietnam and WWII veterans so, every time I can be part of bringing home those members to their families, it just holds so much extra meaning," Thomas added.

Agard was killed July 19, 1950, near Taejon, South Korea, during one of the first battles of the Korean War.

The delaying action fought was fought at Taejon, so the 24th Infantry Division – exhausted after more than two weeks on continuous combat against the Korean People's Army – could withdraw.

Agard arrived in Korea with the division July 3, according to Army records.

The 24th Division made a stand at Taejon against numerically and technically superior North Korean forces from July 14-21, before they were forced to withdraw.

Agard, a private first class at the time of his death, volunteered for a patrol to investigate enemy presence along the road south of Taejon on July 19 to prepare for the division breakout.

While scouting forward of American lines, Agard and his 11-man patrol came under fire. Four were wounded and the remaining personnel were never seen again.

Agard was killed the night before his division withdrew from Taejon – a tactical defeat, but strategic success in providing time for U.S. forces to establish a defensive perimeter around the port of Pusan, Korea.

The 24th Infantry Division lost almost 1,000 men who were killed, with nearly 230 wounded, and another 2,400 missing at Taejon.

"I looked at the obituary and he was 19 years old," said the Rev. Robert Adkins of the Emanual Church in Elmira during the service. "What could he have been in his 80s? At his young age in the miliary, in a tragic situation, Robert did his duty – he showed up.”

Army Graves Registration Service recovered five sets of remains in December 1950 and buried them in the United Nations Military Cemetery in Taejon. Four of the five were identified as members of the 24th Reconnaissance Company patrol lost in July 1950.

Agard's parents, living in the Finger Lakes community of Penn Yan, were notified of his status as missing in action and presumed dead.

The fifth set of remains, lacking identification, were sent to the National Memorial Cemetery of the Pacific at the Punchbowl Crater in Honolulu, Hawaii, for interment as a Korean War Unknown.

The Army declared Agard deceased in 1953 and his remains were declared unrecoverable in 1956.

Department of Defense officials believed that Agard's remains were those of that fifth soldier who could not be identified with 1950s technology.

The unidentified remains were exhumed from the Punchbowl cemetery in June 2019 and subjected to DNA testing.

His remains were positively accounted for on Sept. 29, 2020. Then Agard's cousin, his living next of kin, Gloyd "Dean" Kimball, in Longmeadow, Massachusetts, was notified of the identification.

His family ties at the time of his death included Buffalo, Ithaca, Penn Yan and Elmira.

Following training at Fort Benning, Georgia, he was assigned to the 24th Infantry Division as part of the occupation forces in Japan.

Agard's name was previously recorded on the Courts of the Missing at the Punchbowl, along with the others who are still missing from the Korean War. A rosette will be placed next to his name to indicate he has been accounted for.

"I take my position of honoring these fallen soldiers so very seriously," Thomas said. "They were yesterday's generation, and our role with the Honor Guard represents today's generation showing our respect."

The Defense POW/MIA Accounting Agency lists 7,544 missing in action still unrecovered or unidentified from the Korean War as of April 1, 2022. Since 1982, 612 remains have been identified and accounted.