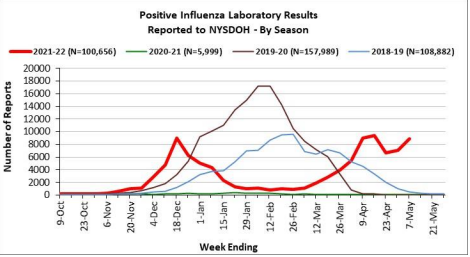 Graphic courtesy of the Erie County Department of Health

Surveillance data has shown an unusual bimodal (two peaks in activity) distribution of influenza activity during the 2021-22 season. Following consistent declines during January and low rates in February, laboratory-confirmed influenza cases and hospitalizations have been steadily rising since March with significant increases in lab-confirmed cases occurring throughout April. It is unknown if activity will remain at high levels or continue to increase in the upcoming weeks.

“NYSDOH data on reported flu cases typically show a steady decline throughout the spring season,” Commissioner of Health Dr. Gale Burstein said. “This year, spring reports of influenza are higher than in previous years, and this increase in reports follows a decrease at the tail end of winter.”

“Flu is still circulating here in Erie County. Despite being near the end of a typical flu season, a flu vaccine may still reduce the risk of severe illness,” she continued. “Flu symptoms can be similar to COVID-19 symptoms, and the preventive measures are also similar.”

ECDOH noted, “Influenza A viruses cause disproportionately more illness among young children and older adults. Since the start of the current influenza season, 100,656 laboratory-confirmed influenza cases and more than 5,600 hospitalizations have been reported, with 59% of all laboratory-confirmed cases occurring in persons aged 0–17 years and 42% of hospitalizations in persons aged 65 and older.”

The NYSDOH advisory encouraged these preventive measures to reduce the risk of influenza transmission in schools and other settings:

√ Stay home when you are sick.

√ Clean and disinfect surfaces or objects.

All persons aged 6 months and older are eligible to be vaccinated. Influenza vaccine for the 2021-22 season can be given through June 30.