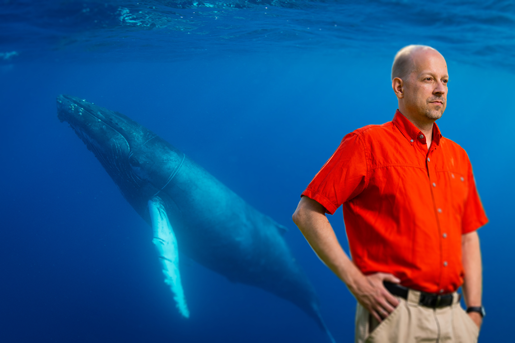 ‘I don’t want to say everyone else is wrong, but the evidence suggests that they are wrong,’ says UB researcher, shaking the foundation of bedrock social learning hypothesis

In a quieter era when a ship’s progress at sea arrived only through the courtesy of the wind, sailors told stories of intriguing sounds coming from humpback whales. If conditions were curiously calm and a vessel through coincidence or pursuit found itself in the close company of humpbacks, crews could hear a mysteriously beautiful call coming from the ocean that seemed to softly shimmer through their ship’s hull, like the faint and fading tone from a struck tuning fork.

In 1952, mariner mythology became scientific reality when a U.S. Navy hydrophone off the coast of Hawaii recorded the songs of humpbacks.

Questions, however, remained, and continue to linger.

It’s unclear why whales sing. Most research suggests a courtship display, a conclusion supported at least partially by the fact that singing is the exclusive ability of male humpbacks. Females make certain calls. So do their calves. But only the males produce the familiar songs.

The purpose of whale song is still an unsolved puzzle, but what’s certain is that whales are not one-hit wonders. They systematically change their highly structured and sophisticated songs, a finding first reported in 1971.

The prevailing hypothesis for how this song morphing occurs – a conclusion reached through more than 50 years of research – is that vocal custom drives the changes. Whales socially learn from other whales, one of the few examples of vocal culture in a non-human species. In the case of humpbacks, scientists overwhelmingly believe that novel songs pass from innovative singers to groups of eager imitators.

“No, they aren’t,” says Eduardo Mercado III, Ph.D., a University at Buffalo professor of psychology.

No Evidence to Support Social Learning

His research shows no evidence of social learning ─ none.

Mercado argues that the yearly changes whales make to songs, despite the current scientific consensus, are entirely and profoundly inconsistent with communal copying.

BG: Am I right in saying that your conclusion is contrary to what most researchers would say?

BG: Are there other scientists who support your conclusion?

EMiii: I’ve worked with co-authors on research about the potential purpose of whale song, but when it comes to findings arguing against the social learning hypothesis, it’s just me.

Mercado against the masses doesn’t seem like encouraging odds, but spend a few minutes with him. Ask about his research. He’s a convincing outlier. He speaks with as much speed as enthusiasm, with every point accentuated with a confidence supported by extensive research. He’s so compelling that you wonder how the social learning hypothesis even survives.

“I don’t want to say everyone else is wrong, but the evidence suggests that they are wrong,” Mercado says. “The idea for cultural transmission originated in the 1980s, and it stuck. It was as though culture became the answer because culture appeared to be the only explanation.”

At one time, that explanation made sense to him.

“For decades, I also thought that singers were learning new song content by copying other singers, but not anymore,” he says. “The accumulating evidence forced me to abandon that interpretation.”

That accumulating evidence amounts to more than 20 years of research that has had Mercado listening to whale song. But is anyone listening to him?

Yes. In fact, the momentum is building.

In the last two years alone, he has published about a dozen studies in leading peer-reviewed scientific journals.

His paper on whale song from 2021 with Christina E. Perazio, an assistant teaching professor at the University of New England, won the 2021 Frank A. Beach Comparative Psychology Award recognizing the best study that year in the American Psychological Association’s Journal of Comparative Psychology.

In that paper, Mercado dismantles the common practice of designating the vocal sequences of whale song into whoops, moans and cries. He says that’s an arbitrary categorization that leads to problematic comparisons. Not all sounds in each grouping are necessarily alike; and the nuance distinguishing one cry from another cry, for example, could be as significant as the inflection in human speech that lends different meanings to otherwise identical sentences, such as, “I am here” and “I am here.”

But it’s his latest paper that stands as a frontal assault, directly contradicting the status quo view of humpback whale song as a form of vocal culture. The findings appear in the journal Animal Behavior and Cognition.

With this paper, Mercado says it’s time to take a step back, look at the predictions made by the social learning hypothesis ─ a presumption that even its most vocal proponents acknowledge has never been tested ─ and consider the counter evidence presented in his research.

“If singers are prone to copying novel songs, then exposing them to successful songs from other populations should elicit imitation,” he says. “In a playback study examining humpbacks’ responses to familiar and unfamiliar songs, 71% of singers exposed to foreign songs swam away from the simulated immigrant, and no singers imitated the novel song.”

The paper’s findings also show how problems arise in what previous research has called incontrovertible evidence of song culture in humpbacks. That evidence involves studies suggesting how whales in an east Australian population began singing songs from wanderers from west Australia.

“If innovations drive cultural revolutions, then waves that spread unidirectionally across populations imply either that only western singers are innovative or that improvisers not from west Australia are always ignored,” says Mercado.

Furthermore, he points out that, if more than one innovative singer arrives, then there should be competing songs in a population.

“Fifty years of recordings have yet to reveal any evidence that such song battles occur in any population,” he says. “Given that there may be thousands of singers in a population, it is highly implausible that only one whale would improvise novel songs or make popular mistakes.”

Innovation is also about progression, so if the innovations accumulate over time there should be no regression to previous songs; yet, Mercado’s work demonstrates how many phrases within whale song do reappear.

But also consider that social learning implies being a “student in the class.” So if whales learn from one another, then distinct populations of whales should have distinct vocal customs. But they don’t, according to the paper’s findings. Populations of humpbacks with no acoustic contact with one another produce acoustically matching themes. Different populations separated by continents may sing the same songs without ever hearing any of the same inspirational models.

All of these factors point not only to a potential new research direction, but amount to evidence that has increased Mercado’s respect for whales.

“This all implies a different level of awareness than social learning,” says Mercado, an expert in plasticity, or the brain’s ability to adapt and change through experience. “The current model is memory based: Whales hear a song; memorize it; and copy it. But what they’re actually doing is more complex.

“We still don’t know what’s driving the song changes, but I’m convinced that it’s not cultural,” he says.