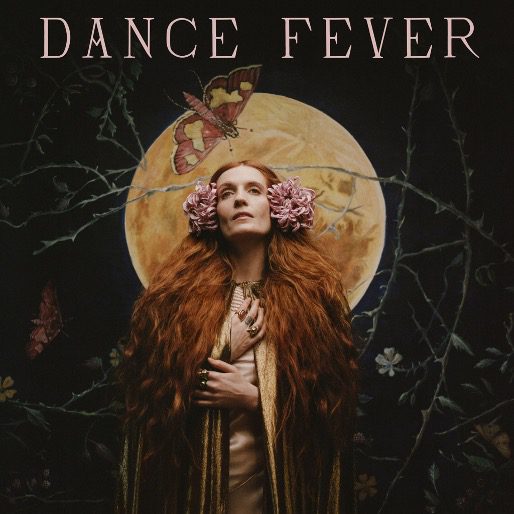 Florence + The Machine on Friday released her anticipated new album, “Dance Fever.” The album features previously released tracks “My Love,” “Free,” “King” and “Heaven is Here,” all of which arrived alongside videos from acclaimed director Autumn De Wilde.

“Dance Fever” was recorded in London over the course of the pandemic in anticipation of the world’s reopening. It was clubs, dancing at festivals, being in the whirl of movement and ultimately music and togetherness that Florence missed the most during lockdown. It was the hopes and dreams of reunions with loved ones and dancing with strangers that helped keep the momentum of “Dance Fever” alive.

Her team said, “That ecstasy, proximity, euphoria at the possibilities of movement served as a reminder of the loss of performance and dancing in clubs. Afterall, music is the unique art form that has the power to help you lose yourself and feel free of anxieties, even if for a moment.

“The image and concept of choreomania – a Renaissance phenomenon in which groups of people danced wildly to the point of exhaustion, collapse and death – became a focal point of inspiration. Forced off the road for the first time in more than a decade, dance offered Florence propulsion, energy and a way of looking at music more choreographically.

“Starting, as ever, armed with a notebook of poems and ideas, Florence had just arrived in New York in March 2020 to begin recording when COVID-19 forced her to retreat back to London. Holed up at home, the songs she had begun started to transform.

“ ‘Dance Fever’ is an album that sees Florence at the peak of her powers, coming into a fully realized self-knowledge, poking sly fun at her own self-created persona, playing with ideas of identity, masculine and feminine, redemptive, celebratory, stepping fully into her place in the iconic pantheon.”

Produced by Florence Welch, Jack Antonoff and Dave Bayley, “Dance Fever” brings back the very best of Florence and was made for the stage. After her three-night run of intimate U.K. shows sold out in one minute of going on sale, Florence + the Machine announced her “Dance Fever Tour” for November, which takes in multiple arena shows – including two nights at The O2 in London.

Florence’s chosen charity partner for this tour is Choose Love, whereby 1 pound from every ticket sold on this tour will be donated to them. Choose Love does whatever it takes to provide refugees and displaced people with everything from lifesaving rescue boats to food and legal advice. Their work has reached over 1.8 million people and supported over 250 fast-acting community organizations across Europe, the Middle East and along the U.S.-Mexico border. Everything they do is powered by a vision of a world that chooses love and justice every day, for everyone.