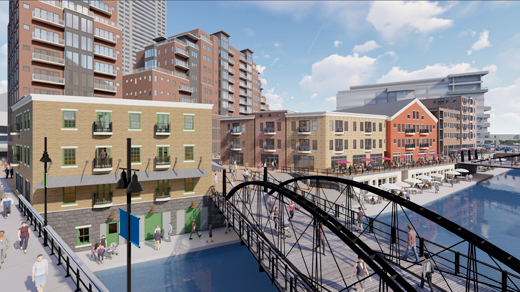 Artist renderings courtesy of the Office of Gov. Kathy Hochul

Gov. Kathy Hochul on Wednesday announced a request for proposals to redevelop the North Aud Block in Buffalo, the state's final remaining parcel to be developed at Canalside.

Her team said, “This RFP presents an opportunity for experienced real estate developers to transform the nearly two-acre site, which is key to the ongoing revitalization of downtown Buffalo. New York state previously committed $10 million in funding to transform the North Aud Block, which will be made available to the selected developer to support site infrastructure. Erie Canal Harbor Development Corp., a state entity, envisions that the project will include retail, restaurants, office space, apartments, a hotel and structured parking within several buildings. The project will incorporate portions of the 19th-century street grid while allowing modernization that acknowledges the site's 21st-century surroundings and infrastructure, blending historic details with the current surrounding city.”

See concept renderings and a map of property here.

"Canalside has become a destination location and catalyst for renewal of Buffalo's historic waterfront," Hochul said. "Redeveloping the North Aud Block will help boost the economy, open new public spaces and make the Buffalo waterfront an even more popular place to live, work and play. The Erie Canal was a bold and audacious undertaking that no one thought was possible, and New York continues to build on our proud legacy with this transformative project."

The site is primarily vacant and was once part of a superblock and home to Buffalo Memorial Auditorium, which the state demolished in 2009. This RFP permits respondents to propose a variety of uses, though proposals are required to include certain mandatory design features, as per the Canalside design guidelines.

The assumed development plan includes nearly 425,000 gross-square-feet in several buildings with an estimated 200 residential apartments and commercial spaces, office/operations space for ECHDC, and up to 450 parking spaces located in a structured ramp that would be constructed both below and above grade. The multiple building development is encouraged to be set within a reconstructed historic street pattern, allowing more of Lloyd Street and Commercial Street to be reconstructed to complete missing sections.

ECHDC Chairman Robert Gioia said, "The development of the North Aud Block is integral to connecting Canalside to Buffalo's established business district and will further enhance the area as a vibrant, urban neighborhood. We look forward to reviewing thoughtful mixed-use development plans that fully explore this location's potential."

The full RFP is available here (note: a free account is required on the New York Contract Reporter website to download the RFP), and proposals are due by 3 p.m. Thursday, Sept. 1. A pre-submittal meeting and site visit will be held at 1 p.m. Thursday, May 19, at the ECHDC offices at 95 Perry St. Respondents to this RFP may propose any mix of uses that will advance the development goals and meet all the development requirements described in the RFP.

Hochul’s team said, “The Aud Block's rebirth dates to 2014, when ECHDC completed the construction of a series of ‘canals’ on the South Aud Block, based on the historic Erie and Hamburg canals. These shallow waterways support ice skating in the winter, roller-skating in the fall, and other recreational activities during the summer, including paddle and pedal boating. Canalside's construction also included the creation of public spaces and bridges. These added canal features have grown in popularity and visitorship each year and are attracting private investment in other new amenities, such as Explore & More: The Ralph C. Wilson, Jr. Children's Museum and the upcoming Heritage Point, which is currently under construction and expected to open in 2023.” 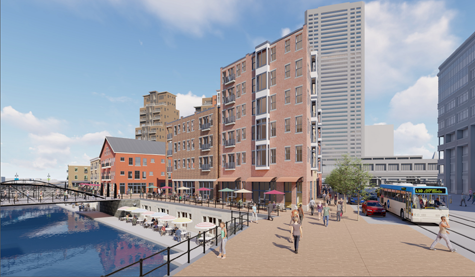 Artist renderings courtesy of the Office of Gov. Kathy Hochul

Congressman Brian Higgins said, "It is a pivotal time of change for Buffalo's inner and outer harbors, as well as the Buffalo River. Western New York couldn't ask for a better partner than Gov. Hochul in helping to lead the transformation of Buffalo's waterfront. Where infrastructure investment is made, private sector interest and regional economic opportunity follows. This project allows us to finally move the North Aud Block from vacant to vibrant."

New York State Sen. Sean Ryan said, "In the last few years, new waterfront attractions like the Buffalo Heritage Carousel and the Explore & More Children's Museum have helped turn Canalside into a year-round destination. The successful redevelopment of Buffalo's Inner Harbor has breathed new life into the city's waterfront and laid the foundation for a major reimagining of what is possible for downtown Buffalo. For years, I have joined Congressman Higgins in calling for development of the North Aud Block site that would complement our investment into Canalside. Today's announcement is a major milestone as we transform the area surrounding Canalside into a vibrant neighborhood, and I am thrilled to see a new vision finally coming into focus."

Assembly Majority Leader Crystal Peoples-Stokes said, "The development of Buffalo's Canalside has helped spark a new life in the city's downtown and entertainment district in addition to helping to stimulate the area's economy. Redeveloping the North Aud Block is the final phase of revitalizing Buffalo's Canalside and historic waterfront. Residents and tourists can now look forward to visiting the completed all-seasoned attraction. I applaud Gov. Hochul's leadership and investment in WNY through the Erie Canal Harbor Development Corp."

City of Buffalo Mayor Byron Brown said, "This is yet another important milestone in the transformation of Buffalo's Inner Harbor. With this RFP, the stage is set for making our Inner Harbor a better place, to live, work and visit, while creating a significant number of jobs for our residents and adding to the city's tax base. I thank Gov. Kathy Hochul for following through with the vision of what Canalside will be for present and future Buffalo and Western New York residents and visitors. I also thank the Erie Canal Harbor Development Corp. for it stewardship of this iconic site."

ECHDC is governed by a nine-member board consisting of seven voting directors and two non-voting, ex-officio directors. The seven voting directors are recommended by the New York state governor and are appointed by the New York State Urban Development Corp. (dba Empire State Development) as sole shareholder of ECHDC. The two non-voting, ex-officio director positions are held by the Erie County executive and the City of Buffalo mayor.

As a subsidiary of Empire State Development, the state's chief economic development agency, the ECHDC supports and promotes the creation of infrastructure and public activities at Canalside, the Ohio Street corridor and the Outer Harbor to attract critical mass, private investment and enhance the enjoyment of the waterfront for residents and tourists in Western New York.