“We are truly humbled by Jeff and Mary Helen and their incredible generosity, which will benefit the students of Niagara University for years to come,” said the Rev. James J. Maher, C.M., president of Niagara University. “However, what is even more impressive than their gift and their support is the manner in which they live their lives. Despite their incredible personal and professional success, they remain committed to serving others in a quiet and humble manner, reflective of their Vincentian hearts.”

Jeffrey R. Holzschuh, ’82, is a managing director and chairman of Morgan Stanley’s Institutional Securities Group, as well as a member of the firm’s management committee. He is also chairman of Morgan Stanley’s global power and utility group. During his nearly 40-year career at Morgan Stanley, Holzschuh has been actively involved in many of the industry’s largest mergers and acquisitions. He was appointed to the United States Electricity Advisory Board by the secretary of energy in 1994 and is a founding member of the U.S. Partnership for Renewable Energy Finance. In addition to his professional work, Jeff has been active with the Metropolitan Golf Association for 30 years, serving on the board, the foundation board, and as the 61st president of the association. He also serves on the national advisory board for Youth INC, a nonprofit dedicated to improving the lives of New York City's youth. 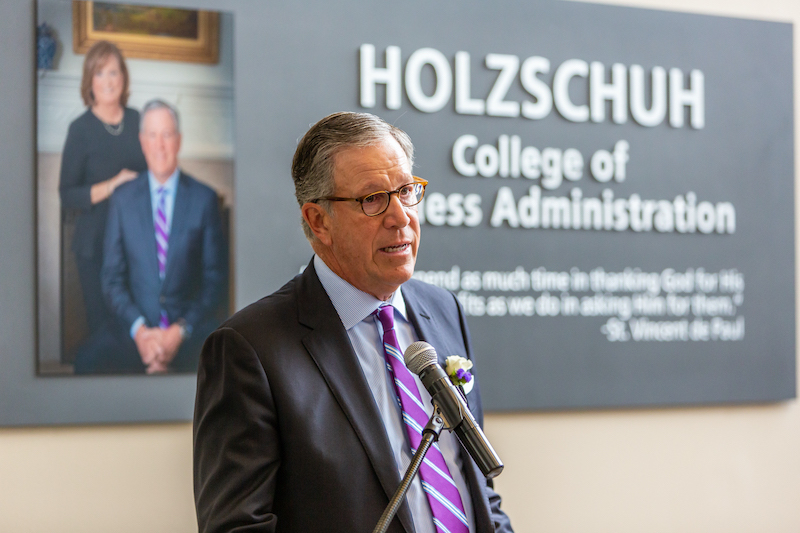 Mary Helen Holzschuh, ’82, earned a B.S. in nursing from Niagara before working as a pediatric nurse at Strong Memorial Hospital in Rochester, and then in pediatric oncology at Memorial Sloan Kettering Cancer Center in New York City. She later served as an operating room nurse in Los Angeles. After starting a family, Mary Helen devoted a great deal of her time to volunteering on school boards and with the religious education program at her parish. She became involved with the Junior League of Greenwich, an organization of women committed to promoting voluntarism, and took on volunteer leadership positions with the Breast Cancer Alliance and Vermont Academy.

Honoring their individual programs of study at Niagara University, a major portion of their gift will be used to support the university’s Trustee Scholarship Program for students in the Holzschuh College of Business Administration and the College of Nursing. The scholarship will support students in the highest academic performance range, qualifying for either the presidential or trustee-level scholarship, with a preferential focus on Pell-eligible students from economically middle-class backgrounds. In addition, a portion of the gift will also be used to support the men’s and women’s basketball programs.

The Holzschuhs, understanding the significance of their gift and the impact of the university’s Vincentian mission, have continually referenced the following quote from St. Vincent de Paul, “We should spend as much time in thanking God for His benefits as we do in asking Him for them.”

"Mary Helen and I are honored to have the family name on the College of Business. Niagara University is a special place for both of us, and we are grateful for the experience of our Vincentian education,” Jeff Holzschuh said. “We feel very fortunate to be able to share our experience and to give back to support student scholarships for business and nursing students, as well as Purple Eagle student-athletes.”

In addition to his professional success, Jeff Holzschuh has been a loyal and engaged member of the university’s alumni. He returned to Monteagle Ridge in 1994 to serve as a member of the university’s board of trustees and, in 2010, he was elected as the chairman of the board. In recognition of his commitment to his alma mater, Holzschuh was presented with the Dunleavy Award in 1992, an honorary Doctor of Commercial Science in 2000, and the Dean’s Award from the College of Business Administration in 2007. Father Maher also presented Jeff and Mary Helen with the Medal of Honor at the President’s Dinner in 2017. Jeff continues his active engagement with the university, and is serving as the chairman of Niagara’s current capital campaign.

As an economics student at Niagara, Jeff served as class president for three years before being elected as the Student Government Association president his senior year. He captained the Purple Eagles basketball team and was honored with the Scaffidi Award for his commitment and dedication. During his time as an undergraduate, Holzschuh excelled academically and was so involved in campus activities that he was awarded the President’s Medal, the university’s highest honor, during his commencement.

Jeff and Mary Helen reside in Greenwich, Connecticut, and they have three adult children.