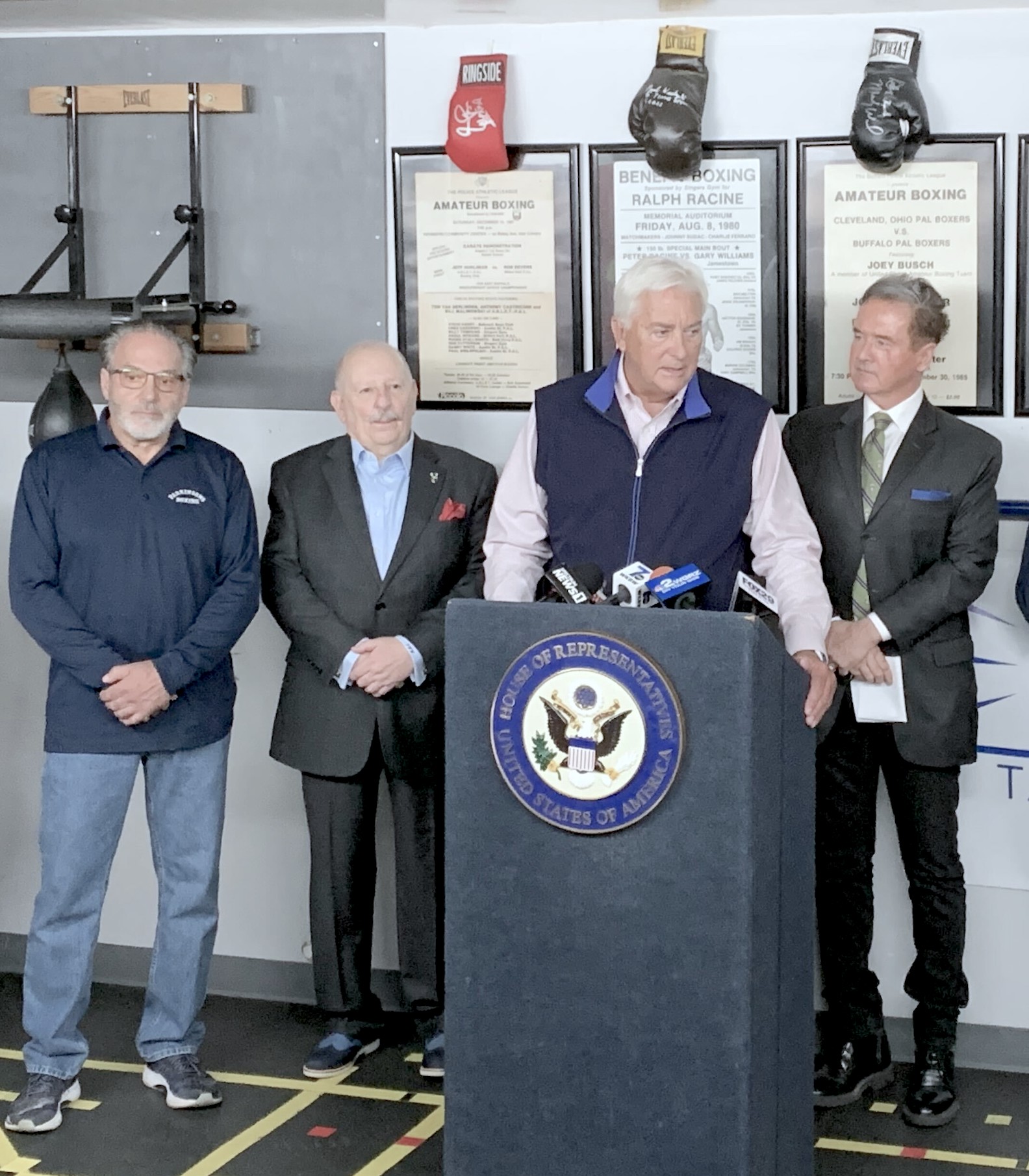 “Many veterans in Western New York and across the country struggle to manage Parkinson’s diseases and similar movement disorders, while maintaining an independent and mobile lifestyle,” Higgins said. “Boxing can provide veterans and other patients with an innovative form of physical therapy that can slow the progress of the disease and improve their quality of life. Currently, it is not covered under VA benefits. The Boxing Therapy for Parkinson’s Access Act will ensure that all veterans have access to this therapy to help them reclaim their lives from Parkinson’s disease.”

“It didn’t take long for Congressman Higgins to go to work on the PD issue,” said former Congressman Jack Quinn. “My brother, Jeff, and I showed him a 15-minute video, at lunch, in the Capitol. Just a few months later, here he is with bipartisan legislation to help provide hope for thousands of our veterans. Special thanks to Congressman Darin LaHood, son of Secretary Ray LaHood, for recognizing the nonpartisan nature of this important legislation.”

“Boxing therapy is a game-changer for people with Parkinson’s disease,” said U.S. Marine (Ret.) Dr. Patrick Welch, a Vietnam War veteran and Purple Heart recipient. “This exercise program has been proven to greatly improve a person's quality of life.”

Higgins’ team added, “Medication alone is often not enough to treat symptoms and slow the progression of Parkinson’s. Exercise is widely recognized as an important tool in preventing and treating this disease. The Parkinson’s Foundation undertook a Parkinson’s outcomes project, which assessed the impact that exercise has on Parkinson’s patients. The results indicate that regular exercise is associated with improved mobility and better quality of life. The VA’s ‘Parkinson’s Disease Program and Clinical Guide’ acknowledges this, as well, and emphasizes the long-term effectiveness of the treatment.”

Tom Guttuso Jr., M.D., professor of neurology at the University at Buffalo and co-director of the Movement Disorder Center, said, “Several studies have demonstrated the benefits of PD boxing for patients’ gait and balance. But, when I see a patient walk into my office who used to be confined to a wheelchair prior to starting PD boxing, that really makes me a believer. Patients are excited about PD, boxing because they see such rapid benefits in their lives.”

In 2020, Higgins sent a letter to then-VA Secretary Wilkie urging the VA to cover boxing classes for veterans with Parkinson’s, as well as to then-HHS Secretary Azar urging the department to dedicate funding toward research on the effects of boxing on Parkinson’s and how it can be incorporated into existing Parkinson’s treatment programs. In May 2021, Higgins testified before the House Veteran Affairs Committee on the effectiveness of boxing for combatting Parkinson’s disease, and advocated for VA coverage.

Parkinson’s Boxing is a Western New York gym exclusively dedicated to helping people with Parkinson’s disease improve their physical and mental acuity. Higgins recently met with veterans who are taking part in a Parkinson’s boxing pilot program through the VA to discuss how the program was providing significant results that are improving their mobility and helping them live more independently. The boxing program regularly reported data on progress of program participants back to the VA, as advocacy efforts for full coverage continue.

“Exercise has many benefits for people with Parkinson's, such as improving balance, walking ability, mood and sleep. Some evidence shows it may even slow disease progression overall,” said Rachel Dolhun, M.D., senior vice president of medical communications at The Michael J. Fox Foundation for Parkinson’s Research. "We hear often from the Parkinson's community that boxing has a powerful impact on both physical and mental health. We're supportive of coverage for these programs for the veteran population and grateful to these representatives for their leadership of this bill."

The legislation is supported by The Michael J. Fox Foundation and Vietnam Veterans of America. Currently referred to the House Committee on Veterans’ Affairs Subcommittee on Health, the bill must be voted first out of the committee, then brought to the floor for a vote in the House before to can move to the Senate for consideration.