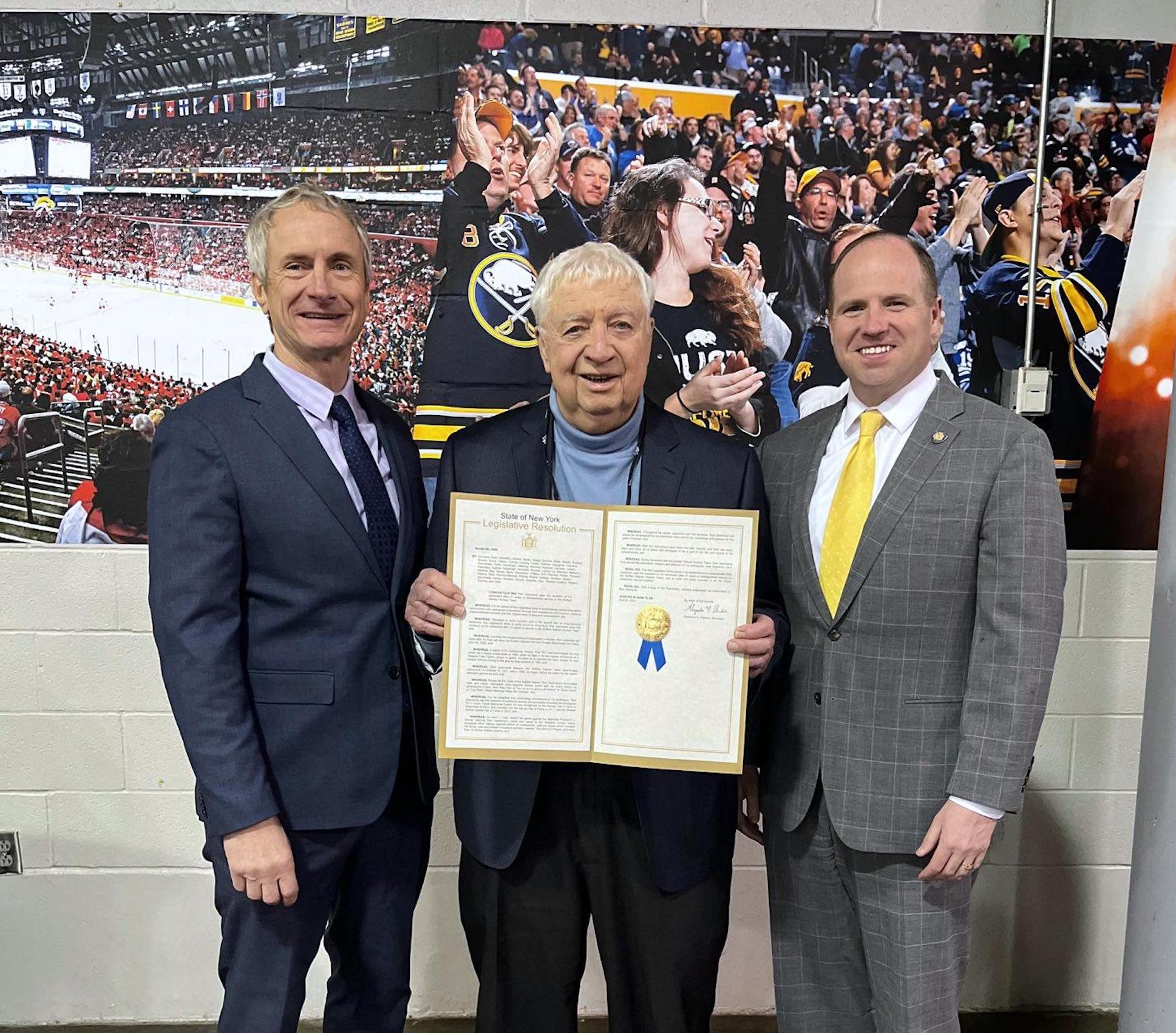 Jeanneret, who has served as the Sabres’ play-by-play announcer since the team’s second season in 1971-72, will retire from the team’s broadcast after tonight’s home game against the Chicago Blackhawks. His 51-year career with the Sabres makes him the longest-tenured broadcaster in professional hockey.

A native of St. Catharines, Ontario, Jeanneret became the Sabres’ radio play-by-play announcer in 1971 and served primarily in that role until 1995, when he began calling the action for the team’s televised games as well. More than five decades later, Jeanneret’s memorable calls and player nicknames have become forever linked with Sabres history for generations of fans.

Earlier this month, a banner bearing Jeanneret’s name was raised to the KeyBank Center rafters alongside other Sabres legends before an enthusiastic, sold-out crowd that included his family, past and present broadcast partners, owners Terry and Kim Pegula, and more than 30 former Sabres players.

Jeanneret was the 2012 recipient of the Foster Hewitt Memorial Award – the most prestigious award available to hockey broadcasters – and was formally recognized by the Hockey Hall of Fame in November 2012. His many other accolades include induction into the Sabres Hall of Fame in 2011 and the Greater Buffalo Sports Hall of Fame in 2012.

Ryan said, “Rick Jeanneret’s legendary goal calls will always be tied to the best moments in Sabres history, and the way he has connected several generations of Sabres fans is just as noteworthy as his body of work. My earliest Sabres memories are sitting in a living room with my father listening to Rick’s energetic voice bringing the game to life on the radio. My daughters’ earliest Sabres memories are sitting in our living room and hearing Rick call the action on the TV broadcast. I thank Rick for sharing his enthusiasm and passion for the game of hockey with our city for so many years, and I wish him all the best in retirement.”

Kennedy said, “As I watch Rick Jeanneret's last call at the arena next to my son, I'll be reminded of my own childhood, when my father would turn down the volume on the television set and turn up the AM radio to hear RJ call Sabres games while my family sat together transfixed to the TV. 'This is how you call a hockey game,' my father would say. RJ has dedicated his entire life to the sport of hockey and to the City and people of Buffalo, and after 51 years of being the voice of the Buffalo Sabres, we're thrilled to honor him with this state resolution in recognition of his spirit and contributions to our community.”