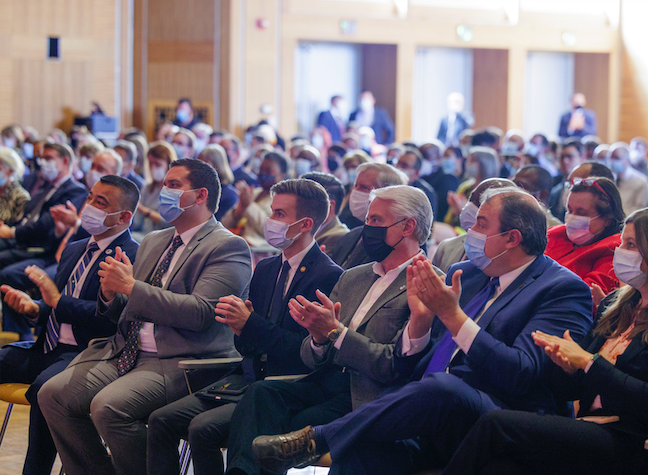 Gov. Kathy Hochul on Monday announced regional investments in the fiscal year 2023 state budget to deliver for Western New York families. Her team said these regional investments build on her previous announcements, including the agreement to keep the Buffalo Bills in New York, the creation of over 350 jobs in Buffalo with the expansion of AML Roughtsource, the deployment of new SNUG Street Outreach employees in Buffalo, and the start of construction on a new $19 million affordable housing development on Buffalo's east side.

"Western New York is home to me. For too long, many parts of this region have been neglected, but that ends now with this historic budget," Hochul said. "With these significant investments, we can restoke the fire that makes Western New York so special and draw people here to share the experience with them. This region has so much to offer, and it's time we put in the work to make it shine brighter so that generations to come can have the opportunity to live their own New York dream."

Investments into Western New York in the FY 2023 state budget include:

√ $8 million for Kleinhans for repairs and upgrades

√ $9 million for needed maintenance at the Buffalo Zoo

√ $20 million for expansion at the Albright-Knox Art Gallery

√ $5 million toward creating a Hispanic Heritage Center in Buffalo

Hochul’s team said the FY 2023 budget includes investments to right wrongs in places that have been previously neglected, including Buffalo's east side. Investments there include:

√ $6 million in support for MLK Park

•Extreme winter recovery (EWR): The budget provides $11.1 million in funding for local roads and bridges in Western New York through the EWR program.

•State touring routes (STR): The budget provides $19.1 million in funding for local roads in Western New York through the program.

•“Pave our Potholes”: The budget provides $10.5 million in funding for local roads through the POP program.

√ $12.2 million for pavement renewal and general bridge repairs along Route 219, from one mile south of the Seneca Nation of Indians Territory to Interstate 86 and Route 954T from Interstate 86 to Route 417, in the Town of Carrollton, Cattaraugus County.

√ $5.9 million to reconstruct the intersection of U.S. Route 62 and Route 429 in the Town of Wheatfield.

•Provide aid and incentives to municipalities: The budget provides $212.3 million in general purpose aid to the region's local governments.

•Reduce property taxes and lower cost of local government through shared services: The budget continues to provide nearly $200 million in state matching funds to support collaboration between local governments through the County Wide Shared Services Initiative. To date, projects in Western New York have been provided with more than $1.4 million in state matching funds.

•Support Western New York schools: New York state “continues its strong commitment to education by providing additional funding to meet the needs of students, teachers and schools amid the ongoing challenges resulting from the COVID-19 pandemic.” The FY 2023 enacted budget increases school aid in Western New York by $169.2 million (6.8%), including a $122.3 million (7.3%) increase in foundation aid. This increase is largely driven by the second year of the three-year phase-in of full funding of the foundation aid formula.

• The FY 2023 state budget includes $600 million in capital funding to support construction of a new $1.4 billion stadium under a joint public-private agreement to ensure the Buffalo Bills remain in New York for the next 30 years. This largest construction project in Western New York history will create 10,000 union jobs, and the state's contribution will allegedly be more than paid for by gaming settlement revenues and income taxes generated by the Buffalo Bills enterprise.

•Invest in local health departments: The enacted budget includes approximately $1 million in funding to increase the General Public Health Work (Article 6) base grants for all full and partial-service counties in the Western New York region. The enacted budget also invests funding for all counties to cover a portion of fringe benefit costs for public health staff through state aid reimbursement, which will help counties increase their staffing levels to meet public health demands.

√ The average benefit for Western New York homeowners will be nearly $650, providing relief to an estimated 283,000 property tax-paying households.

√ This is estimated to provide over 68,000 Western New York taxpayers with an average benefit of $198.

•Provide an Empire State Child Credit bonus payment: The budget provides a one-time supplemental payment of between 25 and 100 percent of the ESCC claimed for tax year 2021, provided the benefit is at least $25.

√ This is estimated to provide over 96,000 Western New York taxpayers with an average benefit of $210.

•New SNUG Outreach Niagara Falls site – The budget provides $500,000 in funding to stand up a SNUG site in Niagara Falls to combat the rise of gun violence in the area.