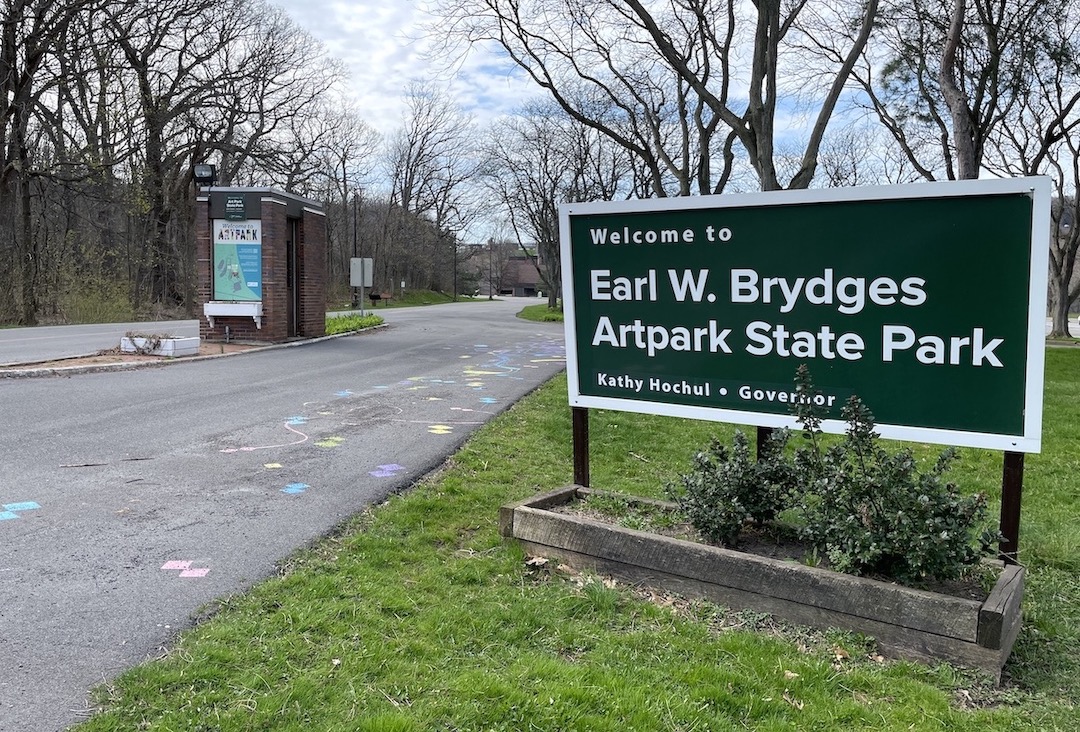 Artpark among recipients of $5.47 million grant from Ralph Wilson Foundation to improve trails

"On Earth Day, we are proud to announce this significant funding that will continue our efforts to expand trails and improve community connections in Western New York," Hochul said. "We are grateful to the Ralph C. Wilson, Jr. Foundation's commitment to the health and well-being of our communities, and this grant will help expand access to safe and healthy recreation, and boost the tourism industry and economy throughout the region."

The Ralph C. Wilson, Jr. Foundation, created after the 2014 death of Wilson, the former owner of the Buffalo Bills and a cofounder of the American Football League, along with State Parks and the New York Power Authority will fund a $9 million comprehensive trail project in Artpark State Park. When complete, the park will be better connected to the Village of Lewiston and the existing trails of the Lower Niagara River Region.

Each entity will provide $3 million to establish a series of formal trails that connect the Shoreline Trail to the Lower Niagara River trail system that connects from the Village of Lewiston north to Fort Niagara and westward.

Elements of the Artpark project include:

√ Installing gateways at the Portage and South Fourth Street entrances to the park to create a more appropriate sense of arrival and assist with circulation;

√ Improving the signature "Redbrick Path" running through the park;

√ Creating a sloped switchback trail that connects the Shoreline Trail to the upper Artpark parking area. This includes a direct scramble that will create an adventurous climb to the overlook on the escarpment;

The Artpark projects come as a plan to expand the Lower Niagara River Trail network is being prepared for release this spring. The report, also funded by the Ralph C. Wilson, Jr. Foundation, was developed by the Niagara River Greenway Commission, which has led work to find ways to create safer, off-road connections north toward Old Fort Niagara State Historic Site, south toward Niagara Falls, and westward to the Village of Lewiston.

Work on the Artpark trails will begin in January 2023 and be completed by fall 2023.

The Wilson Foundation is providing a $1.22 million grant toward a $6.5 million project to construct a 3.6-mile extension of the Quaker Area Multi-Use Trail in Allegany State Park. The first 1.6-mile section of the trail opened in fall 2020 and provides an alternative for pedestrian and bike travel along the busy ASP Route 3 highway. The asphalt-paved trail connects destinations across the Quaker Area, including camping areas, hiking trails and recreational areas, extending from the Taft Cabin Trail to the Quaker General Store/Rental office.

Phase two of the Quaker Area Multi-Use Trail will extend the trail another 3.6 miles westward, from the Quaker General Store to the Quaker Lake Beach. This 10-foot-wide trail will include eight pedestrian bridges and an elevated boardwalk crossing a wetland. As with the first section of the trail, it will traverse through woodlands, across streams and other natural features, connecting with trailheads and park amenities along the way to the swimming beach.

The project is also supported by $2 million in State Parks capital funds as well as the federal Transportation Alternative Program and the Land & Water Conservation Fund; Construction commenced in March.

The Wilson Foundation has granted $1.25 million toward the $6.25 million "Genesee Valley Greenway Bridges of Allegany County" project, which would create 22 miles of continuous trail along the Genesee Valley Greenway State Park. The project includes construction of three new 155-foot bridges and one 20-foot bridge, along with selective resurfacing to provide a continuous route. The project will eliminate detours to busy Route 19 and connect seven rural communities including Portageville, Rossburg, Fillmore, Houghton, Caneadea, Oramel and Belfast. State Parks is working to secure additional funding for the project, which would begin in 2024.

New York State Parks Commissioner Erik Kulleseid said, "These exciting projects will help us continue to connect our parks to their communities, make our parks safer and more welcoming to cyclists and pedestrians, and improve access year-round recreational opportunities. I am grateful to the Ralph C. Wilson Foundation for their ongoing commitment to creating a cohesive trail system in Western New York."

New York Power Authority Chairman John R. Koelmel said, "NYPA has been a big supporter of Artpark for many years and is pleased to contribute to the Artpark trails improvement project. These collaborative efforts will help expand the vision for Artpark while complementing the Niagara River Greenway Commission's focus on the unique natural, cultural, recreational and scenic heritage of the Niagara gorge corridor. By creating connections among the area's important landmarks, the trails will help seed economic opportunities for the region, and ensure Artpark's place as a regional destination for living culture."

Director of the Parks & Trails Initiative for the Ralph C. Wilson, Jr. Foundation JJ Tighe said, "This grant continues to build on the foundation's commitment to trails in Western New York. These three projects across the region are excellent examples of partnerships working to create a stronger regional trail system, connect communities and improve the quality of life of residents."

The Ralph C. Wilson, Jr. Foundation is a grantmaking organization dedicated primarily to sustained investment in the quality of life of the people of Southeast Michigan and Western New York. The two areas reflect the devotion of Wilson to his hometown of Detroit, and greater Buffalo – home of his beloved Buffalo Bills NFL team. Prior to his passing in 2014, Wilson provided that a significant share of his estate be used to continue a lifelong generosity of spirit by funding the foundation that bears his name. Based in Detroit, the foundation began with a grantmaking capacity of $1.2 billion over a 20-year period, which expires Jan. 8, 2035. This structure is consistent with Wilson's desire for the foundation's impact to be immediate, substantial, measurable and overseen by those who knew him best. For more information, visit www.rcwjrf.org.

NYPA is the largest state public power organization in the nation, operating 16 generating facilities and more than 1,400 circuit-miles of transmission lines. More than 70% of the electricity NYPA produces is clean renewable hydropower. For more information visit www.nypa.gov or follow on Twitter @NYPAenergy, Facebook, Instagram, Tumblr and LinkedIn.