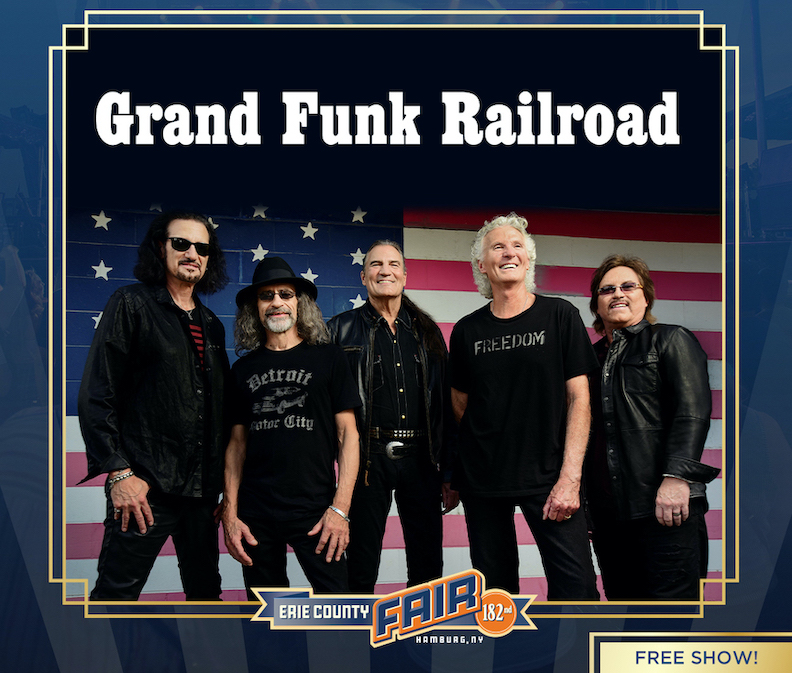 Grand Funk Railroad is touring in 2022, marking a 53-year milestone. The band is set to perform a free show in Hamburg at The Buffalo News Grandstand on Friday, Aug. 12, as part of the Ere County Fair.

Originating from Flint, Michigan, in 1969, this top-selling rock group of the 1970s is “Comin’ to your town to help you party it down.”

Known as “The American Band,” Grand Funk Railroad includes original founding members Don Brewer (vocals and drums, writer and singer of the multimillion-selling hit, “We’re an American Band”) and bassist Mel Schacher, “The God of Thunder.” Joining Don and Mel are true “All Stars”: Singer Max Carl is a rock veteran from 38 Special. He penned and sang 38’s highest-charting hit, “Second Chance,” and was co-founder of California’s legendary Jack Mack and the Heart Attack. Lead guitarist Bruce Kulick is best known for his 12 years with KISS and also has credits with Michael Bolton, Meatloaf and Billy Squier. Keyboardist Tim Cashion has a master’s degree in music from the University of Miami. Affectionately called “Dr. Tim,” his credits include stints with Bob Seger and the Silver Bullet Band, and English soul man Robert Palmer.

Grand Funk laid the groundwork for such bands as Foreigner, Journey, Van Halen and Bon Jovi, with its signature hard-driving sound, soulful vocals, muscular instrumentation and forceful pop melodies. Over their career, Grand Funk has had 19 charted singles, eight Top 40 hits and two No. 1s). The group has now accumulated 13 Gold and 10 Platinum records, with record sales in excess of 25 million copies sold worldwide. The most recent Gold CD award was presented to the band for a greatest hits package: “Grand Funk Railroad the Collectors Series.”

This performance is free with gate admission to the Erie County Fair. No grandstand ticket is required for entry to this performance.

Tickets for all paid shows in the grandstand will go on sale at 9 a.m. June 10, available only at www.tickets.com. Tickets purchased prior to the day of the show will include admission to the fairgrounds on the day of the performance.

The Erie County Fair will be held Aug. 10-21. Visit www.ECFair.org.