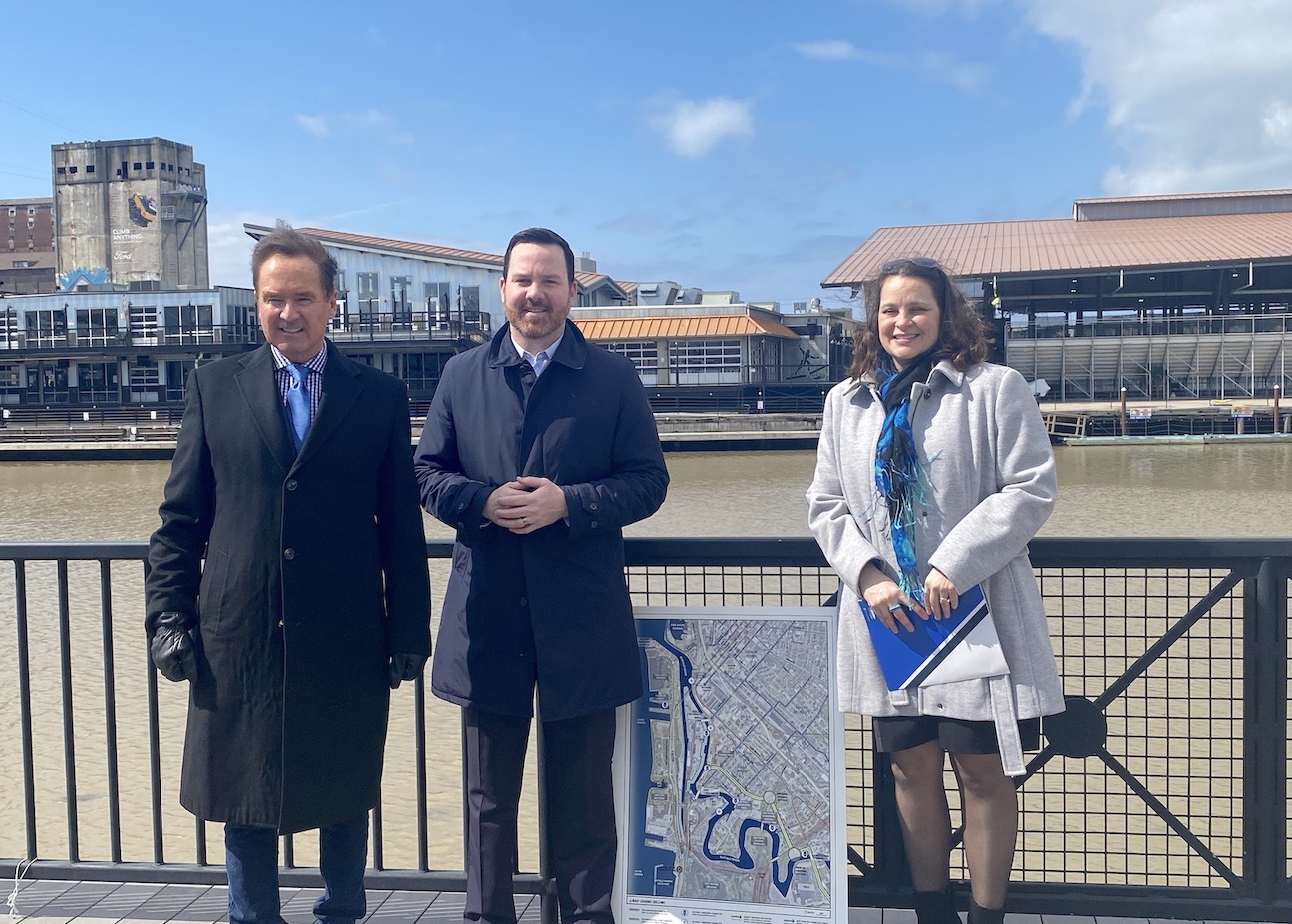 Congressman Brian Higgins, Buffalo Common Councilmember Chris Scanlon, and Buffalo Niagara Waterkeeper are announcing a study to examine the feasibility of a new riverwalk along the west bank of the Buffalo River. Following years of conceptual planning by Waterkeeper, the organization will lead efforts to advance the Buffalo riverwalk project into the feasibility study phase thanks to the support of $50,000 in seed funding from Scanlon.

“Buffalo’s development plans need to focus on access for all, especially when it comes to our greatest asset – our water,” Scanlon said. “The Riverwalk will provide access to pedestrians and cyclists of all ages and abilities to visit from Canalside to the Outer Harbor. I want to thank Congressman Brian Higgins and Buffalo Niagara Waterkeeper for leading this exciting endeavor and for their tireless, herculean work to restore our waterways.”

Higgins said, “Standing at Canalside, the Outer Harbor looks to be a stone’s throw away, but getting there by bicycle or on foot is a long, disjointed journey. The Buffalo riverwalk would fix that gap and further efforts to improve waterfront access. It is an idea championed by Buffalo Niagara Waterkeeper for some time and we are committed to getting it done.”

Executive Director Jill Jedlicka said, “Buffalo Niagara Waterkeeper is actively designing and implementing the ‘Buffalo Blueway,’ an interconnected water trail system that provides equitable and adaptive access to the water. After working for decades on toxic clean-up and restoration of the Buffalo River, planning for the riverwalk is a logical next step for connecting the blue to the green, and is envisioned as a universally accessible trail connector, including elevated walkways, dock level promenades, and recreational access. More importantly, this concept would provide equitable access for people of all mobilities, provides an alternative transportation route that will help reduce vehicle and parking pressures on the Outer Harbor, and encourages sustainable economic development in the urban core, leaving the lakefront in its more natural state.”

The riverwalk would extend along the west bank of the Buffalo River along Kelly Island, between Michigan and Ohio streets, and then connect out to Buffalo’s Outer Harbor. Together with the existing multiuse trail along Ohio Street, this would create a 1.8-mile walking loop and reduce the distance to travel by bicycle or on foot between Canalside and the Outer Harbor by one mile. In addition to expanding waterfront access, the riverwalk project could include adaptive fishing opportunities as well as shoreline and habitat improvements.

Additional funding is currently being pursued with public and philanthropic partners, with the goal of quickly proving the Buffalo riverwalk concept and positioning the community to leverage local, state and federal infrastructure funding for construction.

Buffalo Niagara Waterkeeper, Higgins and Scanlon are working in cooperation with private landowners to complete what they called “the missing link in Western New York’s trail system on Buffalo’s waterfront. The riverwalk would create safer connections to the Outer Harbor between cultural assets such as the Michigan Street African American Heritage Corridor, Canalside and the shoreline trail, while also reducing car traffic and parking pressure on the Outer Harbor.

“The Buffalo riverwalk project would complement other existing or planned projects in the same area, including proposed infrastructure work along Tifft and Louisiana streets, a $10 million investment at Times Beach, a $14.8 million habitat ecosystem project adjacent to Wilkeson Pointe, the $10.6 million ongoing Ohio Street bridge rehabilitation, and development of the Meadows and Lakeside Complex at the Outer Harbor by Erie Canal Harbor Development Corp. It also builds on decades of work led by Buffalo Niagara Waterkeeper to clean up and restore the Buffalo River, which is continuing and being accelerated thanks to over $3.1 billion in federal funding, which will be invested in the Great Lakes over the next five years.”