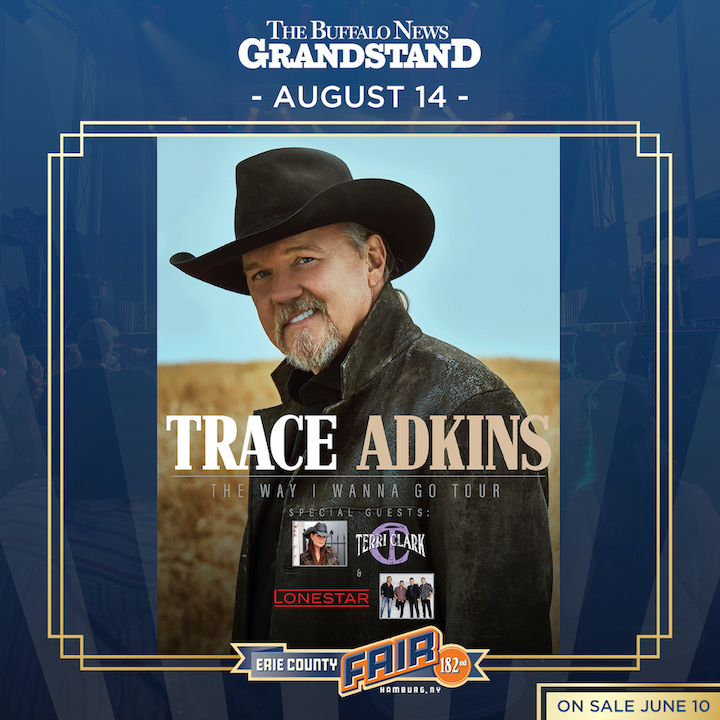 The Erie County Fair is bringing three top name country artists together for one night in The Buffalo News Grandstand. Trace Adkins with special guests Terri Clark and Lonestar are set to perform at 5:30 p.m. Sunday, Aug. 14.

In his 25-year career in country music, Adkins has sold more than 11 million albums, charted over 20 singles, earned numerous awards and Grammy nominations, and garnered more than 2 billion streams. A Grand Ole Opry member for nearly two decades, the Louisiana native is known for his baritone and fiery live performances. He has expanded his music career to include film and TV acting.

Adkins’ debut album, “Dreamin’ Out Loud,” cracked the Top 5 of Billboard’s Hot Country Songs chart with “Every Light In the House Is On.” That was followed the No. 1 smash, “This Ain’t (No Thinkin’ Thing).” Since then, Adkins has pioneered a mix of classic country minded traditionalism and adventurous, good-natured showmanship, breaking open new avenues in modern country through fun-filled hits “Honky Tonk Badonkadonk” and “Hillbilly Bone” (with Blake Shelton). His newest single, “Where The Country Girls At” (featuring Luke Bryan and Pitbull), is available everywhere.

Canadian Country Music Hall of Famer Clark will bring her critically acclaimed international hit singles “Better Things To Do,” “Poor Poor Pitiful Me,” “Girls Lie Too” and “I Just Wanna Be Mad” to the Erie County Fair. Clark is a three-time Juno Award-winner and also holds the honor of being the only Canadian female member of the Grand Ole Opry. She has also been awarded a CMA Award for National Broadcast Personality of the Year for her work on the internationally syndicated Westwood One Radio Show “Country Gold.”

Lonestar, one of country music’s most celebrated groups, is celebrating 30 years in 2022 with over 10.5 million records sold since their formation in 1995. They achieved 10 No. 1 country hits, including “No News,” “Come Crying To Me,” “I’m Already There,” “What About Now,” and their crossover smash “Amazed.” The band’s awards include 1996 ACM Top New Vocal Group, 1999 ACM Single of the Year for “Amazed,” 2001 CMA Vocal Group of the Year and 2022 ACM Top Vocal Group.

Tickets will go on sale at 9 a.m. Friday, June 10, online via www.tickets.com. Those purchased prior to the day of the show will include admission to the Erie County Fair on the day of the performance. For members of the Erie County Agricultural Society, tickets will go on sale one day early. To become a member, visit https://www.ecfair.org/ecasmembership before May 31.

The Erie County Fair will be held Aug. 10-21. Visit www.ECFair.org.