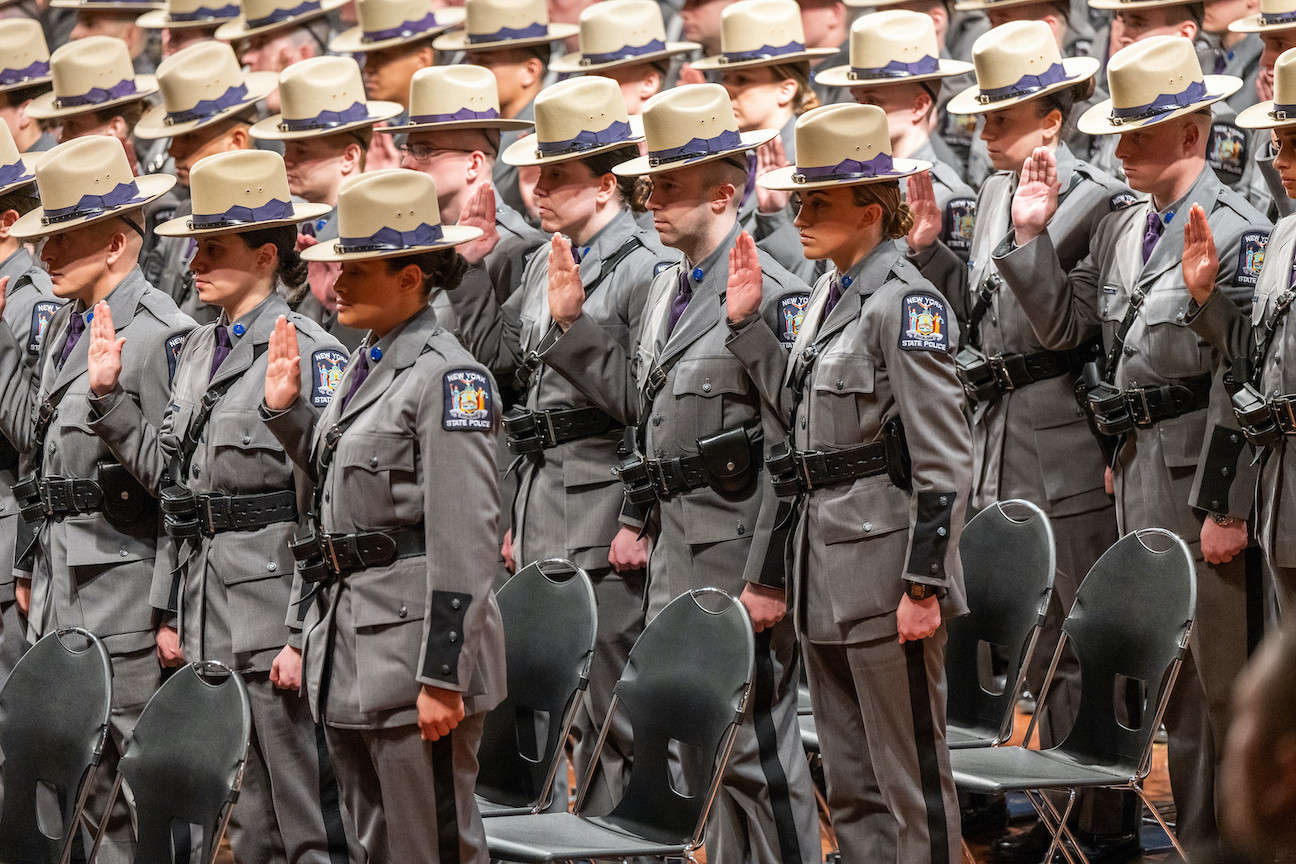 √ NYSP trooper entrance exam is open for registration until April 10

During Women's History Month, Gov. Kathy Hochul on Wednesday announced the New York State Police joined other police departments across the country by signing the "30x30 Pledge," a commitment to increase the representation of women in the ranks while improving the experiences of women in law enforcement. The central commitment of the pledge is for women to be 30% of recruit classes by 2030, and to ensure that law enforcement agencies are truly representative of the jurisdictions and communities they serve.

The pledge is part of State Police efforts to diversify its membership.

"Police work is about public service, and law enforcement agencies are more effective when they have strong connections and reflect the diversity of the communities they serve," Hochul said. "The State Police was created over 100 years ago after the determined efforts of two women. We will build on this legacy and continue to diversify our ranks, and I encourage all who are interested to take advantage of the opportunity to have a profound and positive impact on the lives of others by joining this law enforcement community."

State Police Superintendent Kevin P. Bruen said, "The future success of our agency will rest on our ability to attract the most talented and diverse group of candidates possible to become New York State Troopers. We are proud to stand alongside the dozens of other law enforcement agencies that have made a commitment to the 30x30 Initiative."

The pledge is an effort being led by the 30×30 Initiative, a coalition of police leaders, researchers, and professional organizations who have joined together to advance the representation and experiences of women in all ranks of policing across the U.S. The 30×30 Initiative is affiliated with the Policing Project at NYU School of Law and the National Association of Women Law Enforcement Executives (NAWLEE).

More than 150 police departments across the country, including the NYPD, have signed onto the “30x30 Pledge.” Agencies that sign on have agreed to:

√ Take measures to increase the representation of women in all ranks of law enforcement.

√ Ensure that policies and procedures are free of all bias.

√ Promote equitable hiring, retention and promotion of women officers; and

√ Ensure their culture is inclusive, respectful and supportive of women in all ranks and roles of law enforcement.

Nationwide, women make up about 12% of sworn members, while female membership of the State Police stands at 11.6%.

Hochul’s team said, “Notably, the Division of State Police was created due to the efforts of two women, Moyca Newell and Katherine Mayo. In 1913, a construction foreman was murdered during a robbery in Westchester County. With no local police department at the time, the man's murderers escaped. His employer, Newell, and her friend, Mayo, started a movement to form a state police department that would provide protection to all of New York's rural areas. As a result of their efforts, on April 11, 1917, the NYS Legislature passed a new law establishing the Division of State Police. In 1974, the first four women troopers graduated from the NYS Police Academy.”

State Police signed the “30x30 Pledge” as part of its current recruitment campaign for the division's entrance exam, which is the first step toward becoming a New York State Trooper. As part of the effort to recruit a more diverse population, State Police moved the exam to a computerized format for the first time, making it more accessible. The exam is available at 54 testing centers in New York, more than 250 locations in the U.S., and 112 military locations around the world. Candidates will be able to choose where and when they take the exam.

The State Police also redesigned its recruitment program to reach more female and minority candidates, and met with community leaders across the state to lay the foundation for more productive, long-term relationships.

The deadline to register for the trooper entrance exam is April 10. More information can be found on the State Police recruitment website: https://joinstatepolice.ny.gov/.

•Also on Wednesday, Hochul congratulated 227 new troopers as they graduated from the 210th session of the Basic School of the New York State Police Academy during a ceremony at the Empire Plaza Convention Center in Albany.

"These men and women we welcome into the New York State Police today have worked and trained extremely hard for six months, and have dedicated themselves to protecting the people of New York state," Hochul said. "I commend these new troopers for their commitment to public service and making our state a safer place for those who live, work and travel through New York. I wish them luck as they start their careers and continue the 105-year-long tradition of the New York State Police."

The national anthem was performed by trooper Rhania Traore, and the ceremony included a video presentation of the expansive training conducted by the members of the 210th Basic School Session.

These graduates, who were selected from a list of more than 1,700 candidates, will report for field duty on March 31. For the following 10 weeks, the new troopers will be evaluated under a field-training program supervised by senior field training officers.

Bruen said, "To our graduates, today is a recognition of the hard work and perseverance you have shown during your 26 weeks of difficult training. It is also a testament to your continued dedication, as you waited years before your name was called to join the long gray line. I congratulate and welcome all of our new troopers to one of the most prestigious and well-respected law enforcement agencies in the nation."