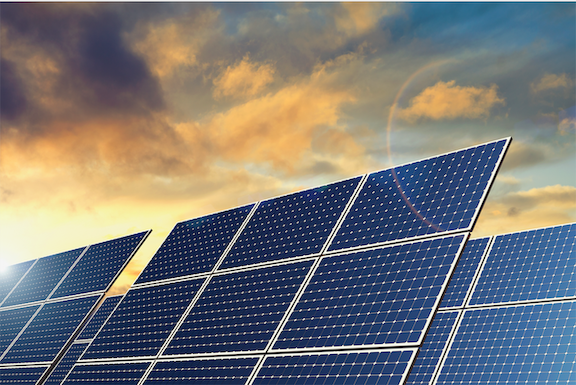 More than 1 gigawatt installed – enough to serve more than 200,000 homes across state

Gov. Kathy Hochul announced New York has become the top community solar market in the U.S. with more than one gigawatt of community solar installed and operational – enough to serve 209,000 homes across the state.

Her team said, “New York also has the largest pipeline in the nation with enough community solar under construction to serve an additional 401,000 homes, ensuring continued access to clean affordable solar for all New Yorkers for years to come. Today's announcement accelerates progress toward meeting the Climate Leadership and Community Protection Act (Climate Act) goal to generate 70% of the state's electricity from renewable sources by 2030 and the governor's goal to achieve 10 gigawatts of solar by 2030.”

Hochul said, "Reaching this nation-leading milestone – with more than one gigawatt of community solar installed – is a testament to New York's aggressive pursuit of clean-energy alternatives that will supercharge our economy and bring us one step closer to a carbon-neutral future. New York is once again making clean energy history and, with many families facing the burden of rising energy costs, my administration remains committed to expanding access to solar energy, which will deliver savings and stabilize electricity bills while meeting our aggressive climate goals."

Lt. Gov. Brian Benjamin said, "Over one gigawatt of progress was made today, enough to power over 200,000 homes across New York state. When we think about the future of our state, we must think about both the economic prosperity we aim for, in addition to the welfare of our children. Now, when those future generations of New Yorkers look toward today, they'll know progress was made with them in mind. I'm proud to announce today that New York is the capital of solar power in the United States."

Benjamin made this announcement in Schenectady County at a 7.5-megawatt community solar project that is paired with 10-megawatt hours of energy storage on the site of a former landfill. Located in the Town of Glenville, the project was developed by DSD Renewables, which is also the owner and operator of the project. The site is part of a seven-project, 25-megawatt portfolio made possible through a collaboration with the Schenectady County Solar Energy Consortium that provides over $400,000 in energy savings annually to the municipalities and cities of Schenectady County and enables each of the municipalities to be powered by 100% renewable energy. Formed by the county in 2019, the consortium includes the County of Schenectady, City of Schenectady, Town of Duanesburg, Town Glenville, Town of Niskayuna, Town of Princetown, Town of Rotterdam, Village of Delanson, and Village of Scotia.

Hochul’s team said, “Community solar enables access to solar for homeowners, renters and business owners who may not have ideal conditions to directly install solar panels onsite. Through this arrangement, clean energy is still delivered by a customer's regular electric providers, and the power produced from the solar array is fed directly back into the electric grid. As the electric grid is supplied with clean, renewable energy, subscribers receive a credit on their electric bills for their portion of the solar system's output.

Community solar made up 70% of total solar installations across the state in 2021. In addition, New York's distributed solar pipeline is now comprised of more than 708 of these projects totaling 2,300 megawatts, which once completed will help expand access to clean energy for all New Yorkers, including low-to-moderate income (LMI) households and those living in disadvantaged communities (DACs). This pipeline is complemented by 73 New York state-supported utility-scale solar projects under development throughout the state – together, these projects will deliver enough electricity to power more than 2.2 million homes once completed. The state's success in deploying community solar is confirmed by the Solar Energy Industry Association and Wood Mackenzie Solar Market Insight 2021 Year in Review report, not only ranking New York as the all-time national leader ahead of second-place Minnesota, but also highlighting the Empire State as No. 1 in 2021 for installations – more than double second-place state Massachusetts.”

New York State Energy Research and Development Authority President and CEO Doreen M. Harris said, "New York is again setting an example for states across the country on how investing in community solar can bring clean energy into the homes of thousands of families while also moving the state closer to reaching our climate goals. With a massive pipeline still to build, we are charting a path for all New Yorkers to be able to sign up for renewable projects like these to lower their electricity costs and be part of our climate change solution."

The achievement of this milestone has been underpinned by support from NYSERDA's NY-Sun program, the state's signature $1.8 billion initiative to advance the scale-up of solar while driving costs down and making solar energy more accessible to homes, businesses and communities. Currently, installed distributed solar projects, combined with the projects that are under development, bring the state to 95% of the current Climate Act goal to install six gigawatts of distributed solar by 2025.

√ Support the installation of solar on the rooftop or property of 165,000 homes or businesses spanning every county in New York;

√ Provide over $1.3 billion in incentives, leveraging $6.1 billion in private investment;

Ensure over $200 million is dedicated to low- to moderate-income (LMI) households, affordable housing, and disadvantaged and environmental justice communities as part of its solar energy equity framework.

Last fall, Hochul called for an increase to New York's solar goal to 10 gigawatts by 2030. To accomplish this goal, NYSERDA and the Department of Public Service filed a roadmap with the Public Service Commission to expand the state's NY-Sun initiative into one of the largest and most inclusive solar programs of its kind in the nation, including continuing incentives for an additional 2,270 megawatts of community solar projects, enough to power an additional nearly 400,000 homes. The roadmap also included targets for projects located in the downstate region and dedicated incentives for community solar projects service DACs and LMI subscribers, consistent with the Climate Act's call for at least 35%, with a goal of 40%, of the benefits of clean energy investments be directed to disadvantaged communities. The roadmap also proposes prevailing wage requirements for solar projects greater than one megawatt within the NY-SUN program to promote the continued growth of high-quality solar jobs.

U.S. Rep. Paul Tonko said, "Community solar will play a critical role in achieving our energy goals. Currently, many residents who want to transition to solar are barred because they cannot afford the cost of panels, they live in rented properties, or their rooftops simply don't support solar. Community solar is a game-changer for overcoming these barriers, allowing more New Yorkers to be part of the clean energy transition. I'm proud of my work in Congress to continue to deliver key investments that cut emissions and lower energy costs for consumers, and I thank Gov. Hochul, the Schenectady County Solar Energy Consortium, NYSERDA, and all whose efforts are continuing to make New York a national leader in the global push towards a clean energy future."

National Grid NY President Rudolph Wynter said, "We are thrilled to join Lt. Gov. Benjamin and NYSERDA here in Glenville today. National Grid is pleased to lead in community solar installations across the state, and we have worked with NYSERDA to develop the ‘Solar-For-All’ program to ensure that low- and moderate-income National Grid customers can realize the benefits of solar interconnections. We are continuously innovating new ways to make solar connections faster, cheaper, and more customer centric. I look forward to continuing our work with the governor, NYSERDA and our other partners to enhance the communities we serve and make our clean energy future a reality."

President of the New York League of Conservation Voters Julie Tighe said, "Congratulations to New York and the solar industry for leading on community solar! Community solar is helping combat climate change and accelerate the growth of renewable energy to meet our ambitious climate targets. If New York is going to meet those clean energy goals, we need to prioritize solar and provide families with an opportunity to use green energy and prioritize those investments in disadvantaged communities. With New York top in the nation for total community solar installs and overall installs in 2021, we are supercharging our power supply – putting us on track to go bigger with renewable solar energy."