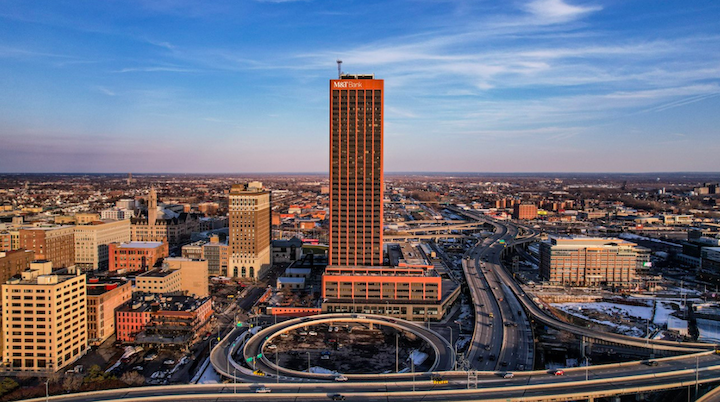 Seneca One Tower photo provided by the Office of Gov. Kathy Hochul.

Gov. Kathy Hochul on Friday announced AML RightSource is expanding in Buffalo and will add an additional 363 employees to support the addition of new services and clients, resulting in a total Buffalo workforce of approximately 540 employees.

AML RightSource is the world's largest technology-enabled financial crime fighting firm. It helps domestic and international financial institutions, financial tech outfits, and other businesses comply with anti-money-laundering regulations and to deter incidents of crime. The $4.3 million project will add an expansion of office space to AMLRS's 20,000-square-foot office on the 27th floor of Buffalo's tallest building, the Seneca One Tower.

"AML RightSource is another success story for Western New York as it grows and provides hundreds of well-paying new jobs in the iconic Seneca One Tower – a building that was empty just a few years ago," Hochul said. "These are the types of professional and high-tech jobs that will keep our new college graduates in the area, while also attracting other high-quality talent to the region. Through strategic partnerships with companies like AMLRS, New York is continuing to accelerate our postpandemic economic recovery by attracting businesses from near and far to develop and expand across the state."

New York, through Empire State Development, will provide up to $7.4 million in Excelsior Job Program tax credits in return for AMLRS achieving its job creation commitments. These performance-based incentives will allow the company to expand operations and create 363 new jobs over the course of five years, which is in addition to the 175 jobs already created by the company in Buffalo through their previous Excelsior Job Program.

In late February, Hochul announced the creation of a Joint Security Operations Center (JSOC) to serve as the nerve center for joint local, state and federal cyber efforts, including data collection, response efforts and information sharing. Her team said, “JSOC is the nation's first-of-its-kind cyber command center that will provide a statewide view of the cyber-threat landscape and improve coordination on threat intelligence and incident response.”

Since 2004, AMLRS has been helping financial institutions meet the federal government's required compliance with regulations related to the identification and reporting of suspicious financial activity. The company uses proprietary technology and a global team of analysts to track illicit financial activity, which can uncover potential human trafficking, terrorist financing, illegal drug shipments, and other nefarious financial schemes.

AMLRS clients range from community banks with $1 billion in assets to global financial institutions with over $1 trillion in assets. Services include transaction monitoring, alert backlog management, enhanced due diligence reviews, and financial crimes advisory matters. AMLRS has also become a global leader in providing technology solutions to its growing client base. The workforce has more than 3,000 global employees, including subject matter experts, across 15 accounts for the industry's largest team of full-time professionals. Of the 175 people AML RightSource has hired in Buffalo so far, 110 hail from a college or university in the region.

A press release noted, “AML RightSource created a branch in the City of Buffalo in 2019, selecting the location due to its close proximity to the company's northeast Ohio operations, accessibility to a large pool of qualified and talented job candidates, and available space to support a growing workforce. Its new location in the Seneca One Tower, a technology center with sweeping views of Western New York, is designed to attract high-level professionals.”

Empire State Development Acting Commissioner and President and CEO-designate Hope Knight said, "Western New York's talented workforce and growing reputation as a hotspot for tech innovation first attracted AML RightSource to the City of Buffalo. Now the company is doubling down on its investment, creating hundreds of new jobs for New Yorkers in the high-growth and increasing important field of financial crime investigations."

AML RightSource CEO Frank Ewing said, "This is a fantastic opportunity for AMLRS, the City of Buffalo, and the state of New York. With the ever-present threat of financial crime on both a national and a global scale, it is the perfect opportunity for AMLRS to create new jobs for recent graduates and professionals alike."

New York State Sen. Tim Kennedy said, "As we build back New York, we're seeing significant investment in our community and our workforce, and these jobs announced by AML RightSource and Moog are a direct reflection of that commitment. This expansion will create new, high-quality opportunities for jobseekers, and build upon the partnerships that are already making our city and region thrive postpandemic."

New York State Sen. Sean Ryan said, "As Western New York's economy moves forward, more good-paying jobs are essential to create a solid foundation for the future. The hundreds of new jobs from AML RightSource will bring many new people to our region, and provide more employment opportunities for local graduates. I thank the leadership at AML RightSource for their ongoing commitment to Buffalo."

Assembly Majority Leader Crystal Peoples-Stokes said, "AML RightSource is doing critical work to make sure financial institutions are safe from bad actors. We are fortunate to have this company in our community providing well-paying jobs for our residents, as the company continues to grow at an impressive rate. Thank you to Gov. Hochul for her support of this expansion project. I congratulate AML RightSource on its success and welcome all of their new employees to the Buffalo."

Assembly member Jon D. Rivera said, "AML RightSource's investment in Buffalo is further proof of our region's renewed economic vitality and resurgence. This project will add depth and an invigorated purpose to one of the city's most iconic buildings, and more importantly, will add good-paying jobs to the Greater Buffalo-Niagara economy."

Mayor Byron Brown said, "AML RightSource's decision to increase its workforce, and expand its operations in the City of Buffalo's Larkinville neighborhood, is wonderful news. The company has already far exceeded the 100 well-paying jobs it promised to create in 2019, and I am very pleased it will boost its employee count to approximately 540. This is further proof that Buffalo's high-tech community is growing and is a key driver of our city's continuing resurgence."