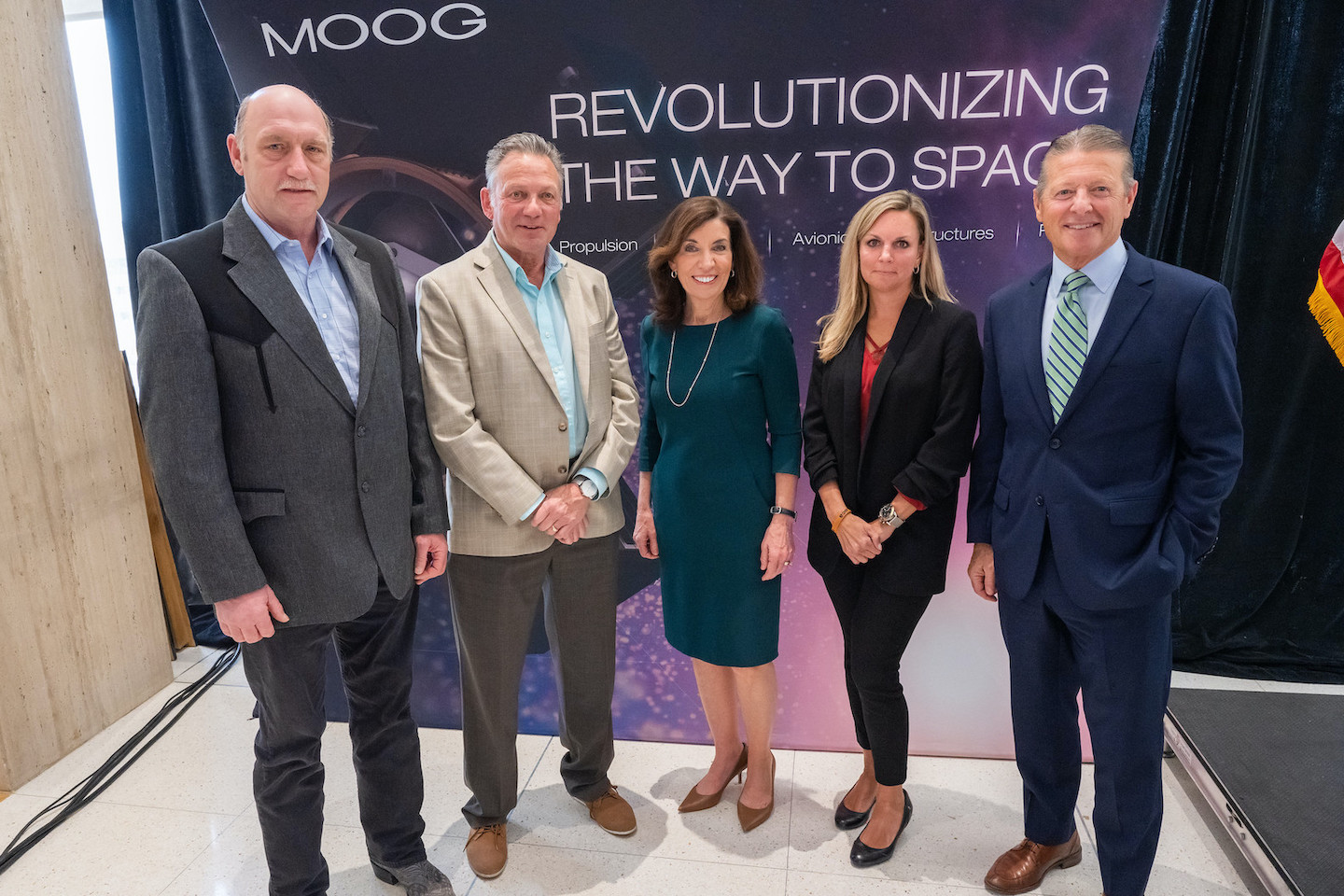 500 new jobs at Moog, with a $25 million investment in Erie County

Gov. Kathy Hochul announced a significant expansion of Moog Inc. in Western New York, creating up to 500 new jobs in the local aerospace industry with the addition of new high-tech manufacturing equipment.

Her team said, “Moog, headquartered in East Aurora, is one of the region's largest employers with more than 3,500 employees in Western New York. The $25 million investment by one of the world's leading manufacturers of precision control components and systems further fuels Moog's continued success in New York state. Programs that will be supported by the project include the F-35 Joint Strike Fighter, V-22 Osprey tiltrotor, full flight training simulators, and hardware for satellites and NASA programs.”

Hochul said, "New York is committed to helping companies like Moog invest in Western New York, and expand their state-of-the-art facilities to generate new high-paying jobs in the region. When it comes to economic development, we have one goal: to be the most business- and worker-friendly state in the nation. This latest expansion by Moog creating up to 500 new jobs is evidence of New York's thriving manufacturing sector, and is a testament to our successful efforts to rebuild and revitalize our state's economy."

Hochul’s team said, “Even with the challenges presented by the pandemic, the aerospace systems and components manufacturer continues to grow and invest in facility expansion, renovations and capital equipment. The $25 million project will include building renovations and the purchase and installation of high-tech machinery, equipment, furniture and fixtures. The project will provide additional manufacturing space with some mixed-use areas for research, development and support staff on its East Aurora campus.”

Moog Inc. Chairman and CEO John Scannell said, "With the generous support of New York state, we have been able to accelerate our investments in our major facilities just outside Buffalo, New York. Our investments in buildings and advanced manufacturing equipment are helping to create new jobs in the highly skilled manufacturing sector. These jobs are across multiple end markets, including defense, space and the electrification of construction equipment. We are very excited about the long-term opportunities these markets present for our base in East Aurora. Investment in organic growth, with the support of the state of New York, will ensure the continued success of Moog into the decades to come."

The 500 new jobs at Moog will include engineering, production line workers, assembly and test, machinists and technicians, manufacturing and support, as well as administration. For job opportunities, visit http://www.moog.com/careers.

New York, through Empire State Development, will provide up to $15 million in Excelsior Jobs Program tax credits in return for Moog achieving its job creation commitments. These performance-based incentives will allow the company, which is projecting approximately $3 billion in sales for 2022, to expand operations and create 500 new jobs over the course of five years.

This is the third project for Moog that New York state has assisted in recent years. A new 95,000-square-foot manufacturing facility to further support Moog's growing aircraft group was completed in 2020. That $44 million project created 100 new jobs and was granted $4 million in Excelsior tax credits.

A new manufacturing and test facility for space propulsion was also built at Moog's existing facility in the Town of Wheatfield in Niagara County. The upgraded 10-acre, 87,000-square-foot facility was optimized to support Moog's growing space propulsion business and includes multiple vacuum chambers to simulate conditions in space. The company was approved for $4.5 million in Excelsior tax credits for the $20.5 million project, which created 100 new jobs.

New York Power Authority Chairman John R. Koelmel said, "We are proud to support Moog as a longtime customer of NYPA, and are excited to see its continued growth and expansion benefit the Buffalo-Niagara Region. This is another outstanding example of how the Niagara Power Project and its hydrogenerated power is the backbone of Western New York's economic development."

Hochul’s team said, “Over the last 70-plus years, Moog engineers have developed the capability to design and manufacture the most advanced motion control products for aerospace, defense, industrial and medical applications – applications where precise control of velocity, force, acceleration and fluid flow are critical. Its motion control portfolio has expanded to include all forms of actuation technology, sophisticated control electronics and system software. Moog encourages a work culture for its employees where the opportunity to solve a challenging control problem is always welcomed.”

Moog also has a working relationship with the University of Buffalo to support the local workforce, including an endowed professorship for innovation with the UB School of Engineering and Applied Sciences. The company offers a co-op program for students to facilitate positions in accounting and finance, human resources, supply chain and IT, as well as for mechanical, electrical and software engineering. Many of those who participate are offered full time jobs upon graduation.

New York State Sen. Patrick Gallivan said, "The continued growth and expansion of Moog Inc. is great news for Elma, East Aurora and Western New York. Moog's investment, combined with the support of Empire State Development, will not only create hundreds of new jobs, it sends a positive message about our region's highly skilled workforce and the ongoing efforts to revitalize our economy. I thank Moog for its long-standing commitment to our region and congratulate them on this exciting project."

Erie County Executive Mark Poloncarz said, "Moog is an important part of Erie County's overall economic portfolio, and this investment is great news for all. As a company based in Erie County, Moog understands that our local workforce and business climate are exceptional and business can grow and flourish here. I thank Gov. Kathy Hochul and Moog Chairman John Scannell and his team for their joint work in securing this terrific investment in Erie County."