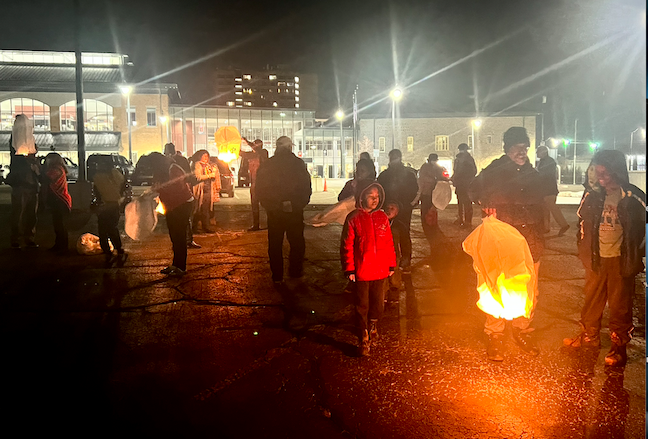 The evening sky over Niagara Falls on Thursday was filled with light that symbolized the continuation of Harriet Tubman’s legacy as one of the Underground Railroad’s most famous conductors. It also marked the bicentennial of her birth.

“The lanterns represented continuing to ignite the light she initially started, and continuing to keep that light on,” said Kiara Santiago, public programs coordinator at the Heritage Center. “She was a beacon of light within our community throughout the country and specifically to Niagara Falls. It represented a lot to the descendants of Harriet who were with us today.”

The “Echoes of Moses” event was hosted by the Niagara Falls Underground Railroad Heritage Center and celebrated the bicentennial of Tubman’s birth, as well as her connection to Niagara Falls. After escaping from slavery, Tubman returned south on numerous occasions to help other enslaved individuals and lead them to freedom in Canada. The last stop on the journey was Niagara Falls.

A press release said, “From the Heritage Center, you can actually see remnants of the former suspension bridge that she crossed with those she was leading to freedom. Tubman was given the nickname ‘Moses’ as an analogy to the biblical story of Moses, who led the Jews out of Egypt to free them from slavery. The ‘Echoes of Moses’ event included activities for the whole family, culminating in the release of the biodegradable lanterns.”

Ally Spongr, interim director of the Heritage Center, said, “We’re really excited to have had so many people come out tonight to the Heritage Center to celebrate Harriet Tubman, the legacies of the Underground Railroad, and all of the men and women who really helped save lives during that time. We try to continue that legacy through our work here at the Heritage Center through sharing stories and facilitating conversations with visitors from all over the world. These stories are so important because they’re from right here. People crossed the bridge to freedom right near where we’re standing right now outside of the Heritage Center.”

For more information on events coming up at the Niagara Falls Underground Railroad Center, visit its website.