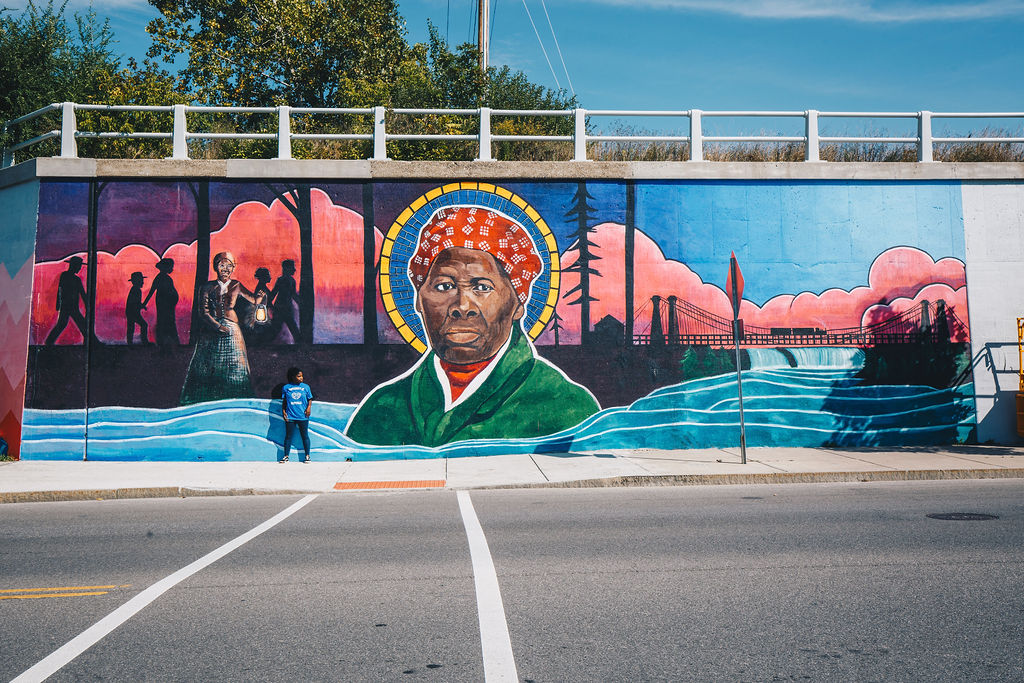 The mural "Harriet Tubman: A Light of Hope," by artist Madonna Pannell, is located across from the Heritage Center. (Submitted photo)

Harriet Tubman bicentennial to be celebrated March 10 in Niagara Falls

An event March 10 at the Niagara Falls Underground Railroad Heritage Center will celebrate the bicentennial of Harriet Tubman’s birth and her connection to Niagara Falls.

“Echoes of Moses” will take place from 6-7:30 pm. Thursday at the Heritage Center, which is located at 825 Depot Ave. West. The event will include activities for the whole family, culminating in the release of biodegradable lanterns.

Participants must register before the event and can do so here. The cost is $8 for singles, $12 for couples, and $25 for families. Heritage Center members get a 50% discount on tickets.

The event will bring the community together to celebrate the life and legacy of Tubman. Bicentennials are the 200th anniversary of a significant event, and Tubman’s birth 200 years ago is most certainly a significant event in American history. The “Echoes of Moses” event is being held March 10 – celebrated nationally as Harriet Tubman Day – as that was the date she passed away in 1913.

“Two hundred years ago, we were blessed with the birth of Harriet Tubman, who grew to touch the lives of freedom seekers around her as she escaped slavery and returned on multiple occasions to free her enslaved brothers and sisters,” said Kiara Santiago, public programs coordinator at the Heritage Center. “We celebrate the strong, resilient and fearless woman who continues to inspire us today.”

After escaping from slavery, Tubman returned south on numerous occasions to help other enslaved individuals and lead them to freedom in Canada. The last stop on the journey was Niagara Falls, New York. One can actually see the remnants of the former Suspension Bridge that Tubman crossed with those she was leading to freedom from the Heritage Center.

The “Echoes of Moses” event name is in reference to Tubman’s nickname, “Moses,” which was given to her as an analogy to the biblical story of Moses, who led the Jews out of Egypt to free them from slavery.

Upon arrival, participants will check in at the desk in the atrium, and will then be split up into appropriate age groups.

Adults and parents will go on a tour of the Heritage Center. Teenagers and middle schoolers will break off to learn about Tubman and all that she did, followed by a trivia game; and children will engage in story time and Tubman-related coloring sheets that were specifically designed for the event.

After an hour or so, Santiago will have everyone gather together again before the evening’s main event, a lantern release.

The biodegradable lanterns symbolize hope and the continuance of the light Tubman initially turned on when she escaped from slavery and returned multiple times to help other enslaved individuals.

The mission of the Niagara Falls Underground Railroad Heritage Center is to reveal authentic stories of Underground Railroad freedom seekers and abolitionists in Niagara Falls, to inspire visitors to recognize modern injustices that stem from slavery, and to take action toward an equitable society. The Heritage Center is an experiential museum operating every Thursday through Sunday during the winter season. It offers self-guided tours, facilitated guided tours, school field trips, and numerous public programs throughout the year.