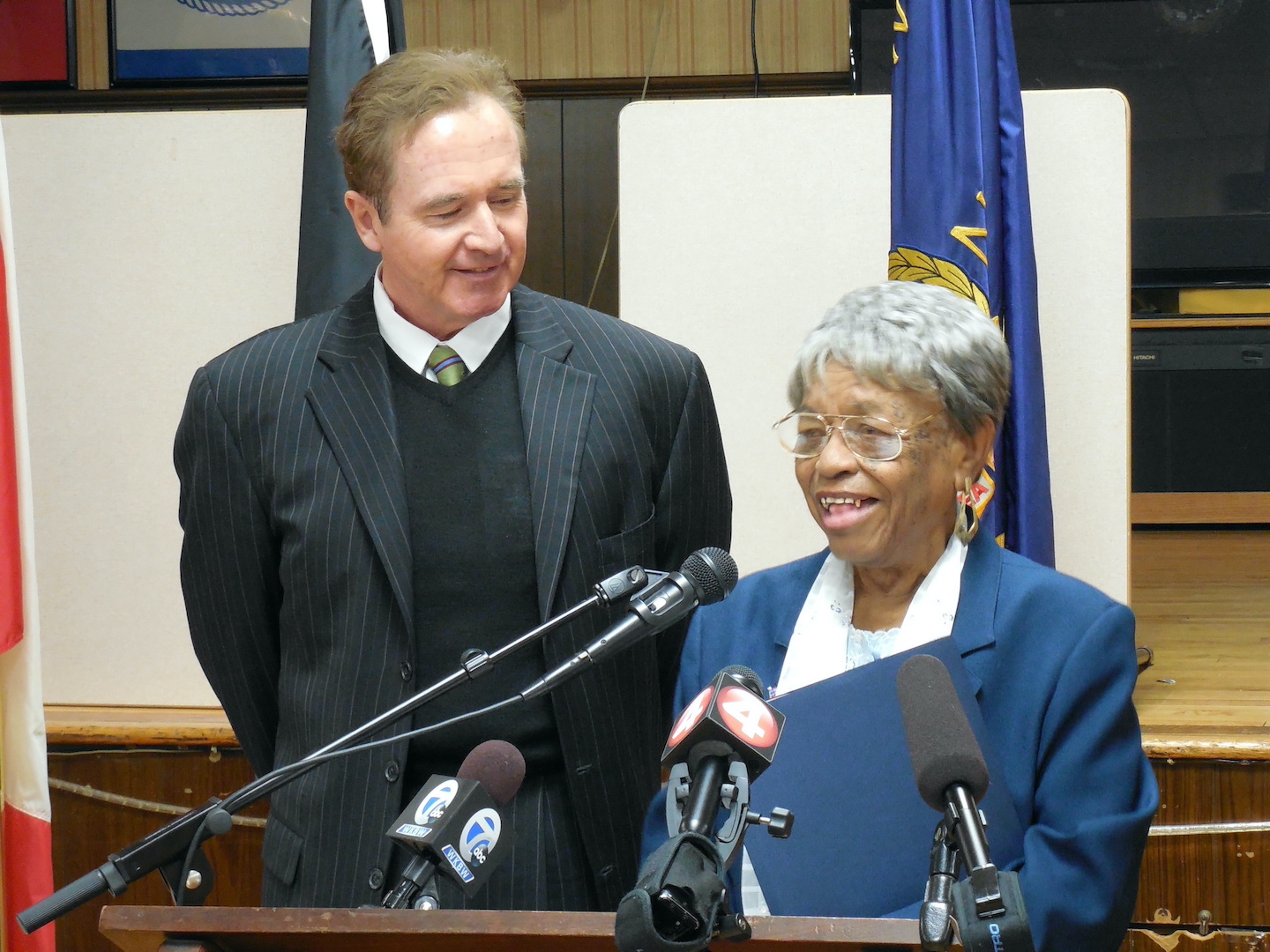 Congressman Brian Higgins is shown with Indiana Hunt-Martin in this 2014 photo. (Submitted)

Congressman Brian Higgins announced the passage of H.R. 2142 on Monday. Sponsored by Higgins, the bill designates the Central Park Post Office, at 170 Manhattan Ave., Buffalo, as the “Indiana Hunt-Martin Post Office Building.” The facility is named in honor of Women’s Army Corps (WAC) veteran Hunt-Martin, a member of the first African American WAC unit – and the only to serve in World War II.

Speaking on the House floor following the passage of the bill, Higgins said, “There are post offices named for presidents and famous celebrities, but I might argue that there would be none more fitting than one paying tribute to the legacy of Indiana Hunt-Martin and her service to the Six Triple Eight Central Postal Battalion.”

Hunt-Martin was a member of the renowned Six Triple Eight Central Postal Directory Battalion that was tasked with processing and routing undelivered mail sent between families in the U.S. and Americans stationed in Europe. From 1978 until her passing on Sept. 21, 2020, she Hunt-Martin the post office on Manhattan Avenue at least once per week to purchase stamps, pick up mail, and send letters.

Graduating from Niagara Falls High School in 1940, Hunt-Martin worked at the Carborundum Co. before joining the WAC in September 1944. After receiving an honorable discharge from the U.S. Army in November 1945, she worked for the New York State Department of Labor in New York City, Niagara Falls and Buffalo for 41 years, until she retired in 1987.

Higgins’ team said, “Throughout her life and military service, Indiana Hunt-Martin experienced racism and sexism firsthand, but no amount of discrimination prevented her from serving her country. Her courage and bravery paved the way for future generations of African American women serving in the military.”

In 2014, days before the 69-year anniversary of her honorable discharge from the Army, Higgins presented Hunt Martin with the Women’s Army Corps Service Medal, the European-African-Middle Eastern Campaign Medal, the World War II Victory Medal, and the Honorable Service Lapel Button for her service during World War II. He is also an original cosponsor of H.R. 1012, the Six Triple Eight Congressional Gold Medal Act of 2021, which would award members of the 6888th the Congressional Gold Medal. The Senate version of the bill passed the House on Monday, as well.

Hunt-Martin is laid to rest at the historic Oakwood Cemetery in Niagara Falls. Before her passing, she was both honored and excited when she learned the post office would be renamed for her.

Higgins introduced legislation to rename the Manhattan Avenue post office in honor of Hunt-Martin in May of 2021. It advanced through the House Oversight Committee in February. The idea was brought to Higgins by Korea Defense Veteran Sandi Williams, who serves as the president and founder of United Veterans of Buffalo.