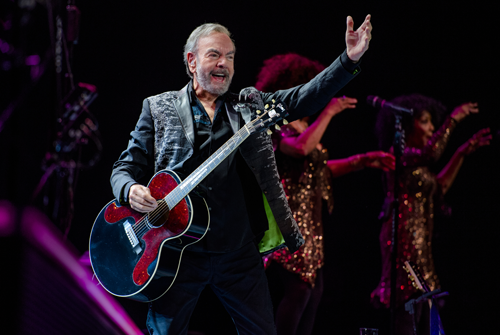 Universal Music Group (UMG) on Monday announced the acquisition of the entirety of Neil Diamond’s historic song catalog through Universal Music Publishing Group (UMPG), its leading global publishing division, as well as the rights to all recordings from Diamond’s career, including 110 unreleased tracks, an unreleased album and archival long-form videos.

A press release noted, “This comprehensive global agreement unifies Diamond’s recorded music and publishing in its new permanent home at Universal Music Group, giving the company unparalleled ability to amplify the iconic artist and songwriter’s body of work and maximize the value of the catalog. Diamond’s legacy of unforgettable hooks, warm baritone and unique ability to articulate human emotions have inspired audiences worldwide, selling more than 130 million albums over the past half century. As noted at his induction into the Rock & Roll Hall of Fame in 2011, ‘Neil Diamond wrote for himself, but he spoke to everybody’ – an appeal that put more than 70 songs onto the Billboard charts.”

The deal builds upon UMPG’s existing relationship with Diamond, as the company has served as his publishing administrator since 2014. Additionally, UMG’s agreement with Diamond cements a professional homecoming, reuniting his early Bang recordings and post-1972 recordings with those he recorded exclusively with UMG’s MCA Records between 1968 and 1972, a period in which he created and released hits such as “Sweet Caroline,” “Holly Holy,” and the chart-toppers “Cracklin’ Rosie” and “Song Sung Blue.” Since 2013, UMG and Diamond have enjoyed a fruitful recording agreement and licensing deal for the non-MCA recordings through its Capitol Music Group division and Universal Music Enterprises (UMe), a close working relationship that produced three albums.

Under the new agreement, which includes previously unreleased tracks, UMG will also record and release Diamond’s future music, should he decide to return to the studio.

In making the announcement, Diamond said, “After nearly a decade in business with UMG, I am thankful for the trust and respect that we have built together, and I feel confident in the knowledge that Lucian, Jody, Bruce, Michelle and the global team at UMG will continue to represent my catalogue, and future releases, with the same passion and integrity that have always fueled my career.”

Sir Lucian Grainge, chairman and CEO of UMG, said, “Neil Diamond is, by definition, a truly universal songwriter. His immense songbook and recordings encompass some of the most cherished and enduring songs in music history. Through our existing partnership, we are honored to have earned his trust to become the permanent custodians of his monumental musical legacy.”

Jody Gerson, UMPG chairman and CEO, said, “A legendary artist and songwriter, Neil’s music exemplifies how truly great songs have lasting power and stand the test of time. With this acquisition, which UMPG COO Marc Cimino played an invaluable part in, our global teams across all of Universal Music will work together to ensure that all of his timeless hits, like ‘Sweet Caroline,’ ‘Red Red Wine’ and ‘Cracklin’ Rosie,’ will continue to impact generations of fans, both existing and those to come.”

Speaking on the announcement, Bruce Resnikoff, president and CEO of Universal Music Enterprises (UMe), and Michelle Jubelirer, chair and CEO, Capitol Music Group, jointly stated, “Over his meteoric career, Neil Diamond created one of the greatest recording catalogues in pop music history. To be able to represent it in its entirety is both an honor and a thrill, and the entire Universal Music team looks forward to upholding his iconic legacy.”

A Brooklyn native, Diamond was inspired to become a songwriter when he was still a teenager, after Pete Seeger performed at his summer camp and Diamond saw fellow campers sharing their own music with the celebrated folksinger. Some years later, Diamond ended up dropping out of New York University to pursue his creative dream full time, only to endure several very lean years as a freelance songwriter, often subsisting on hot dogs and hard candy.

UMG noted, “Diamond finally broke through when he stopped writing for others and started exploring songs about his own experiences and feelings. His ideas and authentic voice ultimately gave rise to a global career that inspired not just millions of fans, but also some of the world’s finest performers.”

His music has been used to soundtrack some of the most popular film and TV series of all time, from “The Simpsons,” “Friends,” “Mr. Robot” and “The Big Bang Theory” to “Donnie Brasco,” “Once Upon A Time In Hollywood” and Urge Overkill’s scene-stealing rendition of “Girl You’ll Be A Woman Soon,” taken from Tarantino’s “Pulp Fiction” – and of course, his own starring turn in 1980, as the lead in “The Jazz Singer.”

UMG added, “Diamond’s work has become woven into the very fabric of American popular culture in other ways, too. ‘Sweet Caroline’ is one of a handful of pop anthems that compel fans of all abilities (or none at all) to sing along with unrestrained joy, as Red Sox fans do during their seventh inning stretch in Boston’s Fenway Park. Perhaps it is fitting that ‘Sweet Caroline’ has become entwined with America’s pastime, because Diamond’s own ascent – one of aspiration, determination, and the sweetness of success – is a quintessentially American story. But his reach extends far beyond America, with the song sung on soccer terraces in the U.K. by supporters of the English national team, at ice hockey games in Canada, and by WBC World Heavyweight boxing champion Tyson Fury, serenading the crowd at the MGM Grand Garden arena in Las Vegas following his knockout victory over Deontay Wilder.”

As previously announced, the world premiere of “The Neil Diamond Musical: A Beautiful Noise,” a new musical production from Ken Davenport and Bob Gaudio, inspired by the singer’s life, will open for a strictly limited six-week engagement at Boston’s Emerson Colonial Theatre on Tuesday, June 21, before heading to Broadway, with tickets on sale in early March.

Diamond’s accolades, among others, include a Grammy, a Golden Globe, Kennedy Center Honors and an ASCAP Film and Television Music Award, as well as induction into both the Songwriters Hall of Fame and the Rock and Roll Hall of Fame.

UMG said, “Such achievements reflect Diamond’s relentless devotion to his craft, and his songs’ enduring appeal to hope.

“By acquiring Diamond’s entire catalog, all masters and unreleased concert video – and through ongoing collaboration with the artist himself – UMG is determined that new and growing audiences will remember this unmatched singer and his music for generations to come.”