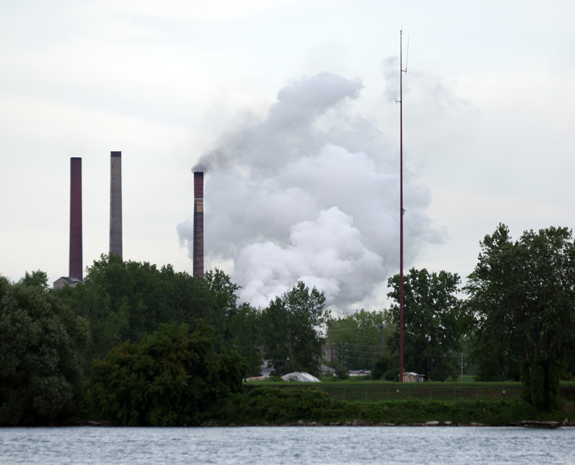 Researchers find that Tonawanda Coke likely contributed to elevated pollution levels on some properties near the plant; however, contamination was not systematic in neighborhoods around the site, scientists say

Scientists from the Tonawanda Coke Soil Study hosted a community meeting on Thursday to share the final results of the research with the public.

Researchers investigated soil pollution in communities that may have been in the path of emissions from the former Tonawanda Coke Corp. plant. A federal judge ordered Tonawanda Coke to fund the research after the company was convicted of violating the Clean Air Act and Resource Conservation and Recovery Act.

Beginning in 2017, scientists worked with community members to collect over 350 soil samples from properties in the City of Tonawanda, Town of Tonawanda, Kenmore, Grand Island and a small section of Buffalo. The research team then tested the soil samples for a variety of chemicals, and worked to understand whether certain pollutants may have originated at Tonawanda Coke.

The research benefits local communities by providing them with information about what chemicals are in their soil, how widespread any pollution may be, and whether these pollutants may have originated at the Tonawanda Coke plant.

The community has been the focus of the study since it began. Hundreds of local residents, as well as school districts and churches, have participated by having their soil sampled. Some residents took part in sample collection. A community advisory committee helped to guide the project.

The study was led by Joseph Gardella Jr., Ph.D., SUNY Distinguished Professor of Chemistry at the University at Buffalo, who has about 40 years of experience studying the environmental impact of industrial pollutants. Professor Michael Milligan, Ph.D., of the SUNY Fredonia department of chemistry and biochemistry, also contributed to the study with unique testing results in the final stage of the study.

Gardella, Milligan and Tammy Milillo, Ph.D., UB research assistant professor of chemistry, research scientist in epidemiology and environmental health, and a core member of the soil study team, presented at the public meeting, which took place virtually, on Feb. 24.

Key findings from the Tonawanda Coke Soil Study include the following:

√ Scientists believe that pollution from Tonawanda Coke left an imprint on the local community. Researchers found evidence that the former Tonawanda Coke plant likely contributed to elevated levels of polycyclic aromatic hydrocarbons (PAHs) discovered on certain properties near the plant, but the team could not draw this conclusion with the “level of confidence” that would be required for a peer-reviewed journal study, Gardella says.

“Where elevated levels of PAHs were found, we can say that Tonawanda Coke almost certainly contributed to these elevated levels. But given the types of local industries and land use history of the area, we cannot declare that they are the sole contributors,” she says, noting that sources of uncertainty in the analysis include the fact that the team could not obtain reference samples from the shuttered Huntley coal-fired power plant and other nearby industrial sources that may have released similar pollutants as Tonawanda Coke.

√ Elevated PAH levels were discovered on some properties near the Tonawanda Coke plant. However, residential neighborhoods near the plant do not appear to be systematically contaminated, scientists say.

The study team identified elevated PAH levels on a limited number of properties in two regions of interest: An area in the Town of Tonawanda that lies around and to the east of the Tonawanda Coke plant, and an area in the City of Tonawanda that sits to the northeast of the plant. However, soil contamination can vary significantly between and even within properties, and many other soil samples taken in the regions of interest did not have elevated PAH levels, scientists say.

A map of the regions of interest is available in a summary of study findings produced by the soil study team, which will be posted to the soil study website.

“From a geographic perspective, the sites and homes with elevated PAH levels were sporadic within the regions where they were found,” Milillo says. She adds that in cases where high PAH concentrations were discovered, it was at a 6-inch depth, so there “is limited potential for exposure danger” for residents.

In general, scientists note that large areas of the broader study area were found to be free of systematic contamination by PAHs and other selected pollutants.

“We didn’t find a lot of systematic contamination in residential areas. We found spots,” Gardella says. “The biggest benefit is that for many people who live close to the plant, who worried that they were living in a toxic area, the contamination overall was not as bad as they thought it might be. Until you get the data, you don’t know. Sometimes, residents want testing and government agencies won’t provide it, so one of the big benefits of this study is that it enabled a significant amount of residential soil testing.”

“That said,” he adds, “there were individual properties that had significant levels of contamination, and we gave that information to residents and explained it so they could decide what they wanted to do.”

All property owners who agreed to participate in the soil study received individualized reports detailing the chemicals found in the soil sample taken from their property. Soil testing results from individual properties cannot be made public out of respect to the privacy of property owners, whose data is protected by confidentiality agreements. For owners of properties with elevated levels of PAHs, “We intend to write a personalized letter to the owners of each residence in that situation and remind them of their data and findings and offer to help them answer any questions they might have now,” Gardella says.

√ As a result of the study, soil pollution was detected and remediated at two elementary schools. Elevated levels of arsenic were detected in soil around a playground at Charlotte Sidway Elementary, part of the Grand Island Central School District. In addition, elevated levels of polycyclic aromatic hydrocarbons (PAHs) and arsenic were detected at William Kaegebein Elementary in soil on the edge of a parking lot. In both cases, the chemicals detected were localized, meaning that they were found only in one area, as opposed to across school grounds.

According to a summary of study findings produced by the soil study team, “This contamination was found as a result of our analysis; however, it was unrelated to [Tonawanda Coke Corp.]. The research team reached out to appropriate school district officials, who worked with the research team and the New York State Department of Health (NYS-DOH) to immediately remediate the affected parking lot and playground areas.”

The Feb. 24 meeting was the Tonawanda Coke Soil Study’s final public meeting. To keep the public informed about the research over the years, the soil study team has:

√ Held multiple public meetings to update the community on the study's progress, share findings, get feedback and answer questions.

√ Presented soil sampling results at public school board meetings in districts that had soil sampled.

√ Held numerous “Talks with Tammy” events, during which participants and other community members have the chance to meet with Milillo to ask questions and learn about the research.

√ Distributed about 25,000 flyers door-to-door in neighborhoods involved, informing residents about the study.

√ Contacted and met with elected officials on multiple occasions to discuss the study and share findings.

√ Sought and received community input on the soil study through a community advisory committee that met monthly during the sampling phase of the study and provided necessary feedback throughout the study.

Community members with questions about the study can contact Gardella at [email protected] until March 31.