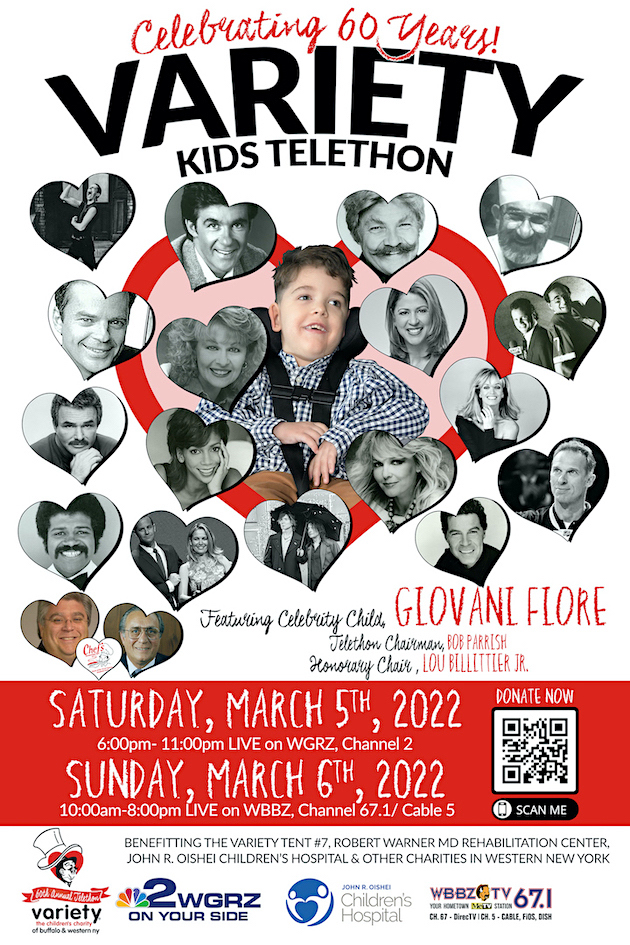 The 60th annual Variety Kids Telethon will take place at the Variety Club headquarters located at 6114 Broadway, Lancaster. The event will be produced and presented from both the studios of WGRZ-TV Channel 2, and the Variety Club HQ from 6-11 p.m. Saturday, March 5. The presentation will also be streamed live at www.wgrz.com.

The Sunday telecast will originate completely from Club Variety HQ from 10 a.m. to 8 p.m. live on WBBZ-TV, Your Hometown MeTV Station, Channel 67.1 on-air; Cable 5; FiOS 5; Dish 5; DirecTV67. The Sunday presentation will be streamed live on the Variety Club of Buffalo Facebook page.

Organizers said, “We are both thrilled and humbled to say the Variety Kids Telethon is entering its 60th year! It’s hard to believe that it has been 60 years, and we are proud to be the longest locally produced Telethon in the United States.”

They added, “Now entering its 60th year, the Variety Kids Telethon has endured because of the support from tens of thousands of Western New Yorkers who tune in and pledge their support each year, along with corporate partners who participate in our corporate match.”

Telethon proceeds benefit dozens of local children’s nonprofits in Western New York, in addition to the Variety Tent No. 7/Robert Warner MD Rehabilitation Center at the new Oishei Children’s Hospital. The Variety Kids Telethon holds the distinction of being the longest-running locally produced telethon in the country, and in 2021 raised over $800,000.”

Organizers said, “For the 60th annual Variety Kids Telethon, it will include a wonderful celebration of sharing memories and stories, reliving the telethon history and, of course, focusing on the future!”

For 2022, prominent attorney Paul Cambria (also Chief Barker of Variety) will return with the president of the Buffalo Common Council, Rev. Darius Pridgen, to co-host the telethon.

Television personalities who are scheduled to participate in the shows from WGRZ, include:

√ Paul Peck and Sue Najowski from “Beat The Champ”

Radio personalities scheduled to participate include:

Local bands scheduled to appear include:

√ Taylor Made Jazz with Van Taylor – Saturday at 9 p.m.

Organizers said, “These popular local bands have not only donated their talents to the telethon, but other fundraising events in the past year. We encourage their fan base to tune in and donate.

All artists and times are subject to change.