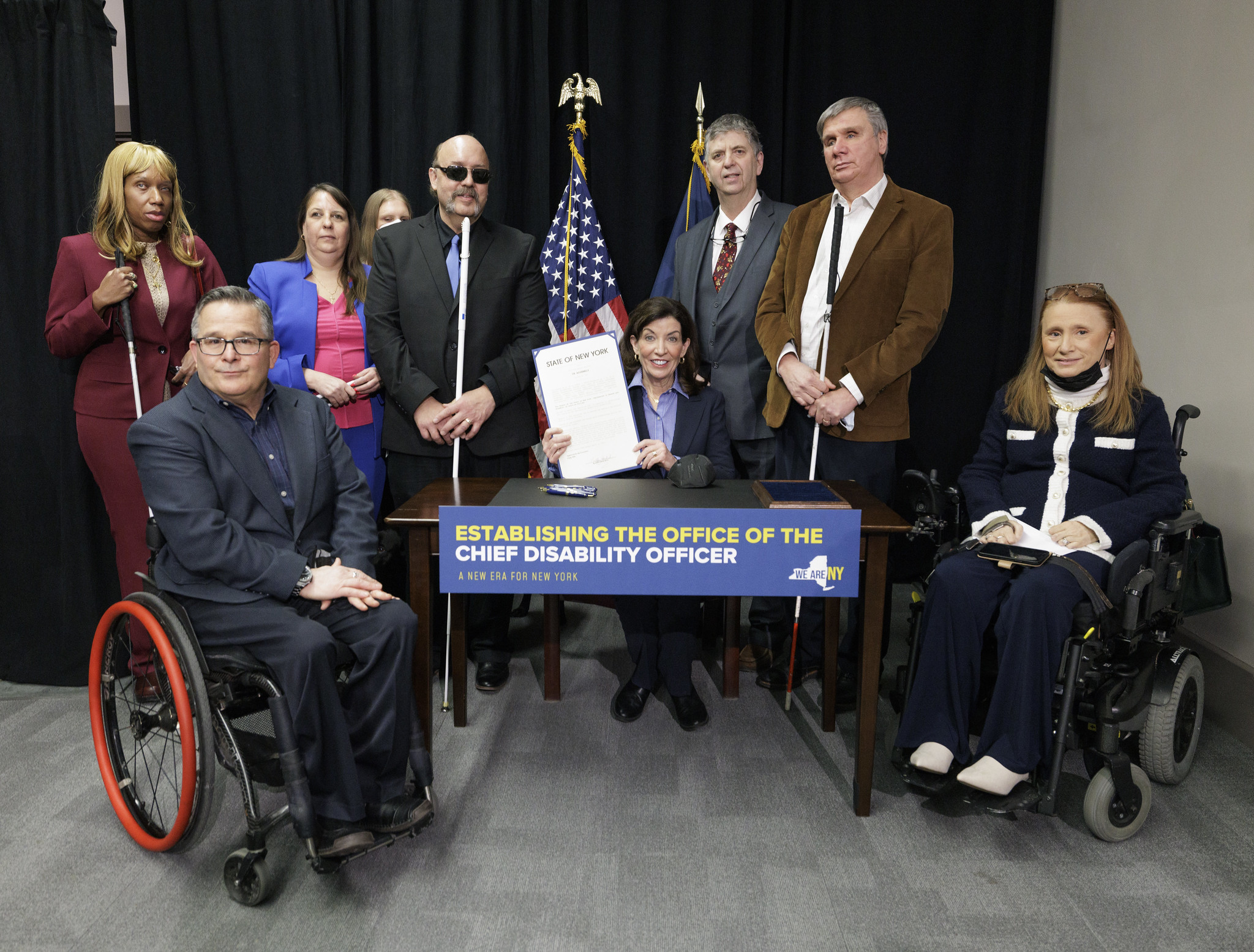 Gov. Kathy Hochul on Monday announced the establishment of the Office of the Chief Disability Officer to advocate on behalf of persons with disabilities. She appointed Kimberly T. Hill as the state's first chief disability officer.

"My administration is committed to protecting the right of all New Yorkers to live and work in our state free from the fear of discrimination," Hochul said. "It is critical that we prioritize the protection of our most vulnerable communities, and the new Office of the Chief Disability Officer will ensure we remain accountable to the pursuit of a more diverse, inclusive and equitable New York."

In 1983, the State Office of the Advocate for the Disabled was established through executive order 26. The primary task of the office was to advocate on behalf of persons with disabilities and implement laws that prevent discrimination against the community.

However, the function and responsibilities of the office was to a large extent absorbed into a different body when the Commission on Quality of Care and Advocacy for Persons with Disabilities (CQC) was established in 2011. The CQC was then disbanded when the Justice Center for the Protection of People with Special Needs was created.

Hochul’s team said, “While there have been many advances in the services available for people with disabilities, it is critical to prioritize the needs of the entire disability community, which includes individuals with physical sensory, mobility, intellectual, developmental and psychiatric disabilities, with a chief disability officer who leads a well-resourced office.”

Office for People With Developmental Disabilities Acting Commissioner Kerri Neifeld said, "At OPWDD, we applaud Gov. Kathy Hochul for continuing to show people with disabilities across New York state that they have a strong and supported voice in her administration. The appointment of a chief disability officer will not only provide a driving force to uphold the rights of all New Yorkers with a disability, but this new position will also help ensure that people can live as independently as possible within the community of their choice fully supported to achieve their individual goals, and help break down silos and ensure people can access the supports they need."

Office of Mental Health Commissioner Dr. Ann Sullivan said, "The appointment of a chief disability officer for New York state is a most welcome step toward meeting the vital goal of ensuring fairness, inclusivity and accessibility for New Yorkers with special needs. This is an opportunity for New York state to increase awareness about disabilities and change perceptions. The governor has made a great choice for the state's first chief disability officer. No one is more qualified for the post than Kimberly T. Hill, with her extensive background in advocating for people with disabilities."

Office of Children and Family Services Commissioner Sheila J. Poole said, "OCFS is celebrating the appointment of a chief disability officer for our state. Ensuring against discrimination of and advocating for the needs of people with disabilities will create an empowering equity and inclusivity culture statewide. And the disability community's needs will be incorporated into policies, which is vital. OCFS is particularly pleased since the New York State Commission for the Blind falls under our purview."

Office of Children and Family Services' Commission for the Blind Associate Commissioner Julie Hovey said, "We are very pleased to support the office of the chief disability officer. This is exciting and a needed resource to assist people with disabilities to excel personally and professionally in New York state. People with disabilities should have full access to all that New York state has to offer, and together, we can create new opportunities as well as a greater understanding of the importance of true accessibility. The commission thanks Gov. Hochul for her strong commitment to help blind and visually impaired New Yorkers."

New York State Chief Diversity Officer Julissa Gutierrez said, "It is an honor to welcome Kimberly T. Hill to lead the state's new Office of the Chief Disability Officer. This announcement is a testament to Gov. Hochul's commitment to advancing diversity, equity and inclusion across the state. Representation matters, and this announcement also demonstrates the importance of centering leaders with lived experiences. I'm looking forward to working with Kim, who is an expert in this field and a tireless advocate for people with disabilities."

Hill has most recently served as the principal analyst for the New York State Assembly Standing Committee on People with Disabilities. She previously served as director of the Assembly Task Force on People with Disabilities, which focused on issues pertaining primarily to people with physical and sensory disabilities. In that role, Hill worked with disability advocates, Assembly chairpersons and staff on several priority issues that led to the passage of bills such as the Most Integrated Setting Coordinating Council (MISCC), the Nursing Facility Transition and Diversion Waiver, New York State's Medicaid Buy-In Program, and the codification of titles II and III of the Americans with Disabilities Act (ADA) into state law.

Hill also coordinated 24 Legislative Disabilities Awareness Days for the Assembly in which hundreds of people gathered annually to inform legislators, staff and others about disability issues, and recognized the achievements of people with disabilities and advocates alike. Hill has been an appointed public member of the MISCC since its creation in 2002.

She began her career in state service as a writer for the Assembly's communication and information services department. Hill holds a Bachelor of Science degree from Utica College of Syracuse University and resides in Latham.

Hochul’s team said, “Under Kim's leadership, the Office of the Chief Disability Officer will establish New York as a model for inclusivity, integration and accessibility by ensuring all state policies, programs and activities truly meet the needs of all people with disabilities. Kim will collaborate with the state's chief diversity officer in the executive chamber to further strengthen a comprehensive approach to diversity, equity and inclusion work across the state. Kim will also coordinate the state's implementation of the Americans with Disabilities Act and serve as the chair of the Most Integrated Settings Coordinating Council.”

Hill said, "It is the honor of a lifetime to serve as New York state's first chief disability officer. I am looking forward to leading a well-resourced Office of the Chief Disability Officer to bring the voices and priorities of all people with disabilities to the forefront, and working towards a more integrated, inclusive and accessible New York. Thank you, Gov. Hochul, for this incredible opportunity."

Assembly member Phil Steck said, "I commend Gov. Hochul for seeing the value in this legislation and signing it into law. It is incredible to me that 3 million New Yorkers live with a disability and there has not been a policy advocate who represents their needs in state government. This is a huge step forward for people living with disabilities in New York state. The community will benefit with having Kim Hill in this leadership position."

Executive Director of the Independent Living Center of the Hudson Valley Denise Figueroa said, "The disability community has waited many years for a voice in state government. We want to thank Gov. Hochul for her leadership in creating this office and, more importantly, for recognizing the need for coordinated policies related to disability. We are eager to work together to set an example for other states to follow."

CEO of the Center for Disability Rights Bruce Darling said, "On behalf of the 7,000 members of the Center for Disability Rights who live in every corner of the state, I want to applaud Gov. Hochul for signing this critically important piece of legislation, which ensures that deaf and disabled New Yorkers are effectively represented in state government and are afforded accessibility in state services."

CEO of the New York Association of Psychiatric Rehabilitation Services Harvey Rosenthal said, "Great thanks are due to Gov. Hochul for an historic moment that sends a message of hope, commitment and support to over 3 million New Yorkers with disabilities. At long last, we'll have a staff member and office committed to protecting and promoting the rights and needs of our broader community, and a governor who's committed to the development of a plan that will set targets to increase housing, employment and transportation offerings across the state."

Director of Advocacy at the New York Association on Independent Living Meghan Parker said, "We thank Gov. Hochul for her leadership in creating an Office of the Chief Disability Officer. By establishing this office, Gov. Hochul has already distinguished herself as responsive to the needs of the disability community. We look forward to working with the Hochul administration and this office moving forward on tackling the serious issues disabled people are facing across the state."

Chair of the State Committee of Blind Vendors Karen Blachowicz said, "On behalf of the New York State Committee of Blind Vendors, we would like to thank the governor for the creation of the Office of Chief Disability Officer. As mentioned in the Governor's State of the State, the Business Enterprise Program provides employment opportunities for New Yorkers who are legally blind. We applaud her actions on recognizing the hard-working blind entrepreneurs in our state, and thank her for recognizing the priority that is given to blind vendors under the New York State Randolph Sheppard Act. The New York State Committee of Blind Vendors looks forward to working with the chief disability officer on identifying ways to enhance and expand the Business Enterprise Program."