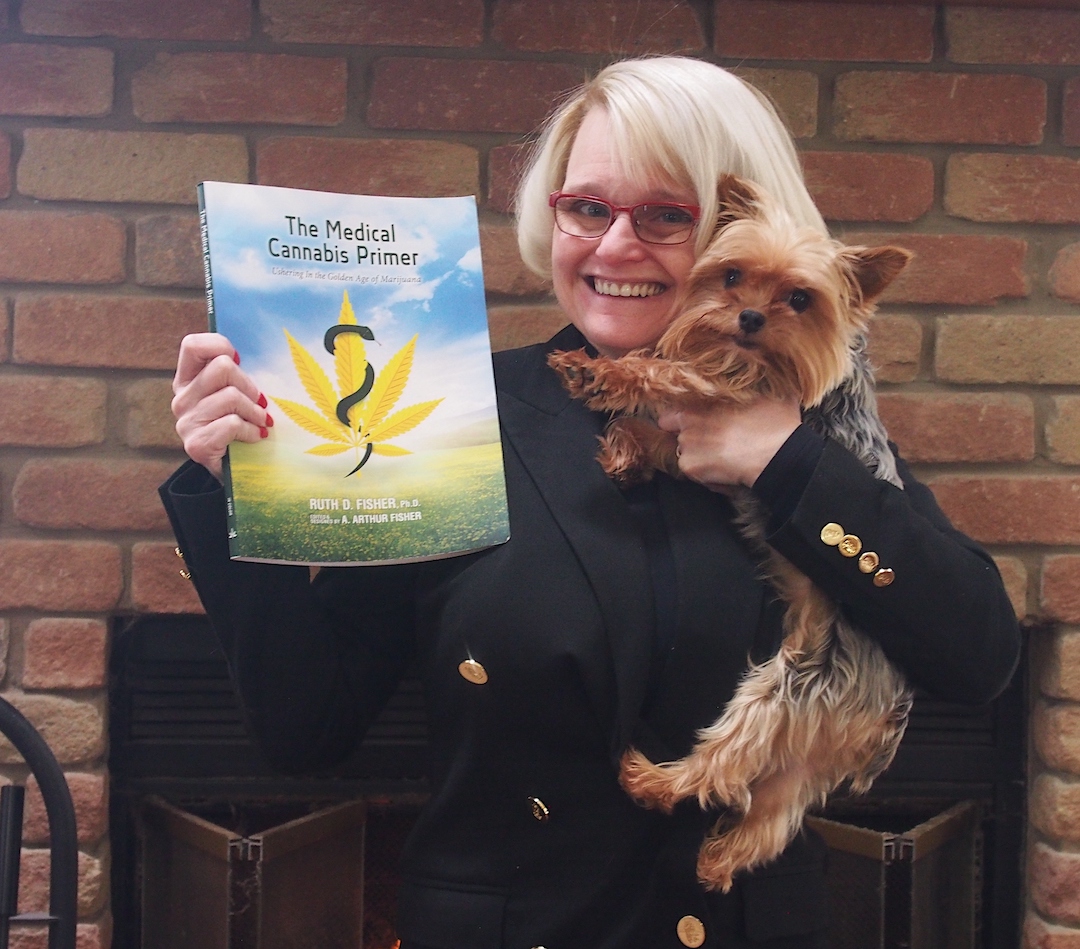 Nikki Lawley is shown with her dog and a book about cannabis. She said cannabis "saved me" following years of suffering from a traumatic brain injury.

Nikki Lawley said cannabis saved her life, which changed dramatically after she experienced a traumatic brain injury on Oct. 11, 2016. The former nurse and blackjack dealer has appeared on “The Montel Williams Show” to talk about the benefits of cannabis for the victims of traumatic brain injury. Williams, who has multiple sclerosis and who, in late May 2018, had a cerebellar hemorrhagic stroke, also advocates for medical marijuana as a way to deal with chronic pain.

Nikki also shares her message on her own website called Nikki and the Plant.

“Nikki and the Plant was created as a platform to reach others who are suffering from traumatic brain injury or invisible illnesses,” she said.

In addition, on March 20, Nikki will present her story at the New England Cannabis Convention, organized by NECANN.

“I’d gone to numerous places. Up until recently, it’s all been virtual,” she said. “I’ve been on 50 different podcasts, had many different interviews. I’m really becoming a voice for advocacy of this plant. It’s not about Nikki Lawley, it’s about the plant.”

She explained her first experience with public speaking was at a Sept. 20, 2021, meeting of the Grand Island Town Board, when she said, “I am a medical cannabis patient. The opt-in provision allows access for medical patients to actually consume and purchase cannabis locally. For me, cannabis saved my life from a traumatic brain injury. We can educate and actually make a huge difference by opting in. We can create an environment for people, such as myself, to consume and educate others on the benefits of plant medicine. I just ask the town to please consider consumption and retail because it’s really needed for our medical community.”

The town board voted on Nov. 1 to opt out of permitting facilities that offer on-site consumption of marijuana to operate in the town. An opt-out decision can be reversed in the future. The town did not opt-out of permitting dispensaries to open on Grand Island.

Nikki explained how the traumatic brain injury she suffered in 2016 resulted in lasting health issues that rendered her unable to perform at either of her jobs as a nurse and as a blackjack dealer.

“I was working as a pediatric nurse, and a kid didn’t want a shot,” Nikki said. “In a pediatric office, this is pretty standard operating procedure. A nurse called me for assistance. I went in. The kid was definitely combative. He tucked his chin, so I went into a restraining hold of him. He threw his head back and hit me in the forehead. I went back into a wall, back into his head. It was a double-impact traumatic brain injury.”

Almost immediately, Nikki experiences such symptoms as left-arm weakness and tingling. She was unable to feel her arm or hold a telephone. She was diagnosed with a concussion.

She had trouble getting medical professionals to believe she was not well.

“The first few months after the injury, I was in such a dark place. They put me on so many different drugs. Through this process, over 50 different doctors, more than 60 different medications, I’d lost all hope of living. I had literally planned my death. And I was, ‘I can’t live like this.’ The pain was excruciating. The things that I still struggle with today are pain in my head and neck, brain fog, cognitive function, and anxiety and depression. All of those things were magnified much more before I found cannabis.”

Nikki’s husband, Jack, described what it was like to watch his wife before and after her traumatic brain injury.

“Nikki was working both as a nurse and as a blackjack dealer. She had two full-time jobs, almost, for seven years. I thought that she was crazy to work that hard, but she liked to do both,” he said. “When it first happened, we noticed a dramatic change. Depression set in almost immediately because, all of a sudden, from being this person who was involved in so many things, she was doing absolutely nothing.”

She found cannabis while on vacation in Las Vegas.

“My husband saw how depressed I was, how much pain I was in, and he said, ‘We need to go to Vegas. We need to take a vacation. We need to do something to pick you up,’ ” Nikki said. “So, we went to Las Vegas. The airplane ride there was absolutely not cool. The excruciating air pressure changes, things like that, did nothing for my pain. It really became atrocious. When we got to the hotel, normally, we request a high room, overlooking the Bellagio Fountains in Las Vegas, because we’re stayed at this hotel numerous times. When we got there, I was like, ‘I don’t care if I’m looking at a closet. Get me a room.’ I didn’t leave that room for three days. My husband was going crazy, looking at me like, ‘You’re ruining our vacation.’ And I said, ‘Jack, what am I supposed to do? I can’t function.’ ”

That day in Las Vegas, the Lawleys saw a rolling billboard that changed their lives.

“So, I see a billboard going by that said, ‘Get your medical marijuana card today,’ ” Nikki said. She was skeptical that medical marijuana could do anything for her. “And I was like, ‘Oh, good idea. Being on drugs. Fried eggs. The whole Nancy Reagan thing. ‘Just say “No,” ’ with the egg frying.’ So, immediately, I’m like, ‘Oh, great idea, Nikki. Go and put your brain on drugs.’ ”

After the billboard passed the hotel for the second time, the Lawleys decided to get Nikki her medical marijuana card.

Nikki said Jack had few doubts. She reported he said, “ ‘Let’s go! Let’s try it. You’ve laughed before. You’ve been happy before. Let’s see if it will work.’ And so, we did. I got my medical card in Nevada, and I went to my first legal dispensary, where a young employee recommended products for her. She described them as ‘very sedating,’ not what I use now.”

“But it got me off the ledge,” Nikki said. “Cannabis saved my life from a traumatic brain injury.”

When the Lawleys returned to Grand Island after their vacation was over, Nikki discovered she could not use her medical marijuana card at any New York state dispensary. “How hard can it be in my home state? Well, chronic pain was not on the list of approved conditions at the time. My injury was in 2016, and this was January 2017, when I discovered the plant. When we got home in February, we were like, ‘What am I going to do now?’ So, we got this tiny glisten of hope, and, then, I went right back into the depressed state because I had lost all hope again. It was like the drugs are not working, they are not helping me.”

Dealing with workers’ compensation was very difficult, Nikki said, describing it as “like fighting the worst insurance company you can ever imagine.”

The Lawleys spent $50,000 of their own money as they traveled around the U.S., looking for relief for Nikki, who said the long-term effects of her traumatic brain injury included chronic pain, the brain fog, and anxiety/depression. She said the brain fog was so bad that she was unable to do simple arithmetic or to deal seven cards to five persons. She said that, as a person who had always found mathematics to be easy, the loss of her skills was very distressing.

Nikki found relief in Canada, after friends invited her to stay with them for a few weeks and sale the legal cannabis.

“I went to Canada, and they got products from a licensed producer up there, and I started sampling different strains,” she said. “I was sampling different kinds of cannabis, understanding that they don’t all work the same. Understanding it’s all about the terpenes and the minor cannabinoids. Terpenes are basically what gives cannabis its smell. They’re like essential oils.”

Nikki explained she was given a certificate of analysis for each type of medical marijuana she used. The certificate of analysis provides a detailed listing of all of the ingredients, including types of terpenes and cannabinoids, which are defined by Merriam-Webster as “naturally-occurring, biologically active, chemical constituents.”

She explained, “I’m learning about the different cultivars. I’m learning about the different strains, trying different things. Jack called me for a catch up, and I was playing Scrabble, and I was doing the basic math of counting the letters up. And he said, ‘What’s wrong with you?’ ‘What do you mean, what’s wrong with me?’ ‘You sound normal. You don’t sound like you’ve sounded for the last months.’ I was laughing and I was talking. I was happy for the first time in months. I mean, euphoria is not a bad side effect.”

Nikki noted she was able to travel to Canada regularly to use medical marijuana and that, because of a program called Stainprint, she knew exactly what ingredients were in her cannabis. During her visits to Canada, Nikki became much more informed about how cannabis could help her deal with her chronic health issues. “I started learning about the science behind the plant, and I started learning about the amount of research that actually has been done,” she said.

In March 2020, when the COVID-19 pandemic resulted in the shutdown of the U.S.-Canada border, Nikki was no longer able to travel to Canada. She does, however, have a New York state medical marijuana card. The quality of the cannabis is not the same, because of the lack of research in the U.S.

Because marijuana is considered to be both illegal, as well as a schedule one controlled substance by the federal government, it is extremely difficult to do clinical trials. To do these trials, scientists have to obtain a license from the federal Drug Enforcement Agency and get the study approved by the Food and Drug Administration.

Other drugs listed as schedule one include heroin, LSD and ecstasy. Schedule one drugs are considered to be highly addictive and to have no medical benefit. Drugs that are schedule II, which means that clinical trials can be done, include fentanyl, which has been implicated in the deaths of people who were unaware that the heroin they were using was laced with fentanyl. One of the effects of fentanyl is to depress the respiratory system. That effect can be counteracted with Narcan, if administered in time.

According to WebMD, however, cannabis can help cancer patients deal with the side effects of chemotherapy, as well as with symptoms of such conditions as Alzheimer’s disease, multiple sclerosis, epilepsy, glaucoma and eating disorders.

Nikki said cannabis gave her her life back, adding that cannabis does not make her high; it makes her well.

“A freak injury changed me; cannabis saved me. That’s the best way of putting it,” she said. “In the end, it’s about quality of life. Cannabis gave me a quality of life when I had none. Zero. And the more that I can help remove the stigma and can teach people to find what works for them.”

Jack said, “We’re very optimistic about the future. Whether anything financially happens or not is really another story. What this has done is that, not only has this brought her back from the TBI, but now she’s got a purpose. She’s got goals and objectives. She’s fully enjoying what she’s doing. She is helping a lot of people.”