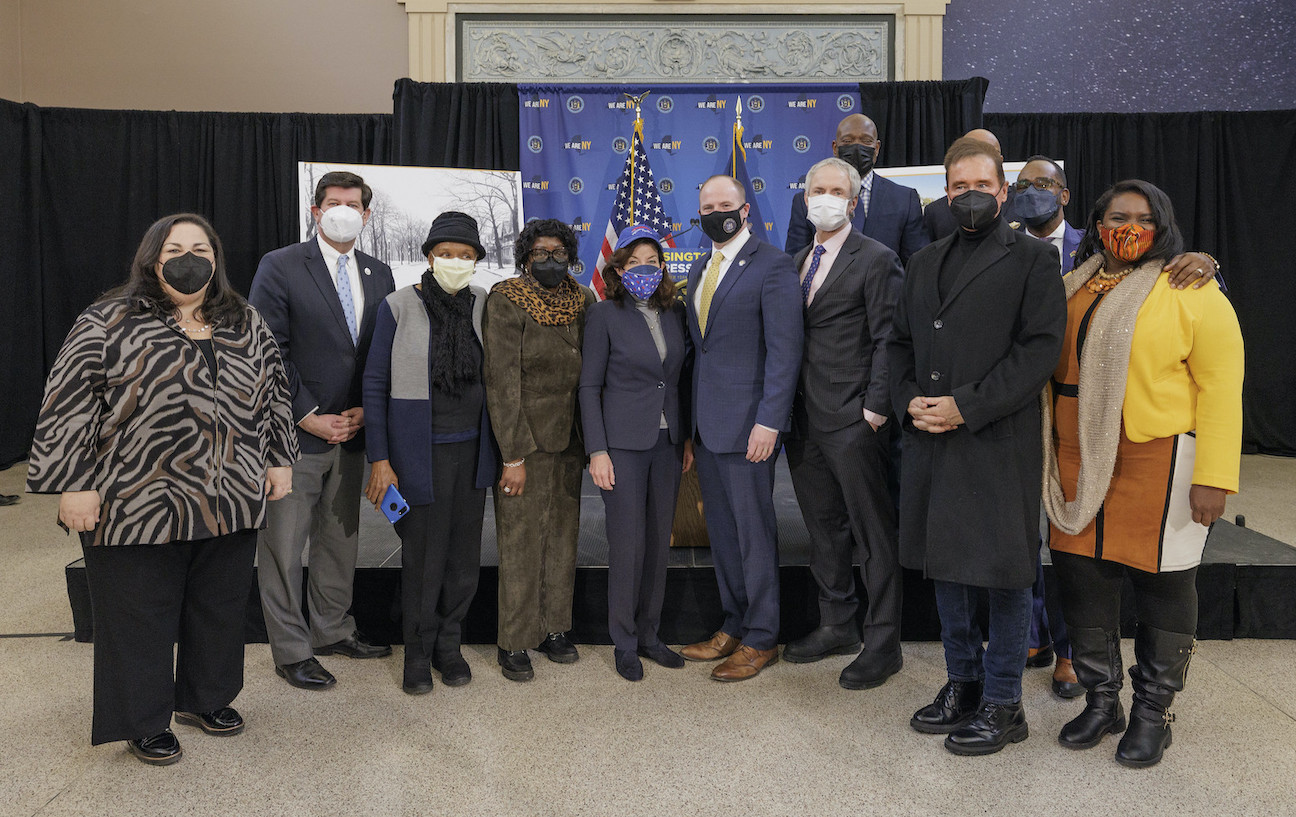 Hochul: Kensington Expressway project would help 'reunite communities & right the wrongs of the past'

“These unprecedented and targeted investments, highlighted by the governor in her recent executive budget address, represent a generational opportunity to reunite neighborhoods, promote economic growth and revitalize many of New York's most important urban centers.”

The governor highlighted these investments at an event near the Kensington Expressway, the construction of which, her team noted, “removed the historic Olmsted-designed Humboldt Parkway and divided the surrounding neighborhoods with the construction of a below-grade expressway.”

Hochul said, "Reconnecting neighborhoods that were severed by asphalt highways is a cornerstone of our bold infrastructure vision for a better New York. Better infrastructure means better quality of life, and the communities around the Kensington Expressway in Buffalo and across our state deserve nothing less. These projects will help right the wrongs of the past through safer and reliable transit networks, landscapes designed to bring communities together, and routes that are friendlier for pedestrians and bikers."

Hochul also announced the New York State Department of Transportation will commence an environmental review to assess alternatives for reconnecting and restoring the east-west neighborhoods in the City of Buffalo that were divided by the construction of the Kensington Expressway more than six decades ago. The federally required review will examine the environmental, community, economic and other impacts associated with a partial or full cover of the current Expressway, with the goal of achieving a preferred alternative.

A press release said NYSDOT “will work aggressively with the Federal Highway Administration to streamline the environmental review process. As part of the state's commitment to transparency and engaging the community, the public scoping process will begin this spring with a preliminary scoping report to be completed later this summer.”

It continued, “Constructed during the 1950s and 1960s, the Kensington Expressway replaced what had been a grand, tree-lined boulevard – the historic Humboldt Parkway designed by Frederick Law Olmsted – with a below-grade highway that severed the connection between the surrounding neighborhoods. The original boulevard connected Humboldt Park (now Martin Luther King, Jr. Park) with Delaware Park.

“The review, being advanced by the Department of Transportation, will assess opportunities to create new open public spaces, enhance bicycle and pedestrian safety, and reduce current adverse impacts of noise and air pollution. The review will also assess enhancements to the local roadways to facilitate safe vehicle operations within reconnected neighborhoods.”

Project boundaries include the eastern limit of East Ferry Street and western limit at Best Street. The expressway carries about 80,000 cars per day.

NYS DOT will work with the City of Buffalo, the Greater Buffalo-Niagara Regional Transportation Council and the neighboring communities “at every juncture as this important project advances.”

NYS DOT Commissioner Marie Therese Dominguez said, "The Kensington Expressway project represents a historic opportunity to enhance safety and mobility in and around the City of Buffalo, and, importantly, reconnects neighborhoods that have been divided for more than a half a century. The Department of Transportation is excited to get this environmental review process underway and looks forward to working with the community and all our partners to further develop this project to help reconnect neighbors, one to another, within the great City of Buffalo and across the great state of New York."

Hochul’s team said, “The highway expansions of the post-World War II era ripped through communities of color across the country, tearing apart the fabric of these neighborhoods in ways that still need repairing today. People lost their homes and their businesses; social connections were replaced by speeding cars and vehicle emissions. New York state was not immune to this destructive path, which hit low-income and minority communities disproportionately hard, from the Bronx downstate to Buffalo and Syracuse upstate, and many places in between.

“Gov. Hochul is committed to repairing the damage of transportation mistakes from decades ago. Instead of loud, polluting highways, these projects will prioritize walking, cycling, active streets and green spaces designed to tie together communities and small businesses. New York must use its infrastructure opportunities of today to revitalize communities torn apart by infrastructure decisions of the past.”

The state's capital plan includes nearly $3 billion over the next five-year period to address these issues.

Sen. Chuck Schumer said, "In New York and across the country, highways like the Cross Bronx Expressway, Syracuse's I-81, Buffalo's Kensington and Scajaquada expressways, and Rochester's Inner Loop have too often been built through low-income neighborhoods and communities of color, dividing cities, limiting investment for the people most in need, and devastating community health with concentrated air pollutants from vehicles traveling. Infrastructure should build up communities, not divide them. That is why I made it a priority to create a new federal Reconnecting Communities program as part of the bipartisan infrastructure and jobs law that I negotiated to provide dedicated funding to critical projects like these. I am proud to have also delivered billions of dollars in federal funds through the infrastructure and jobs bill that will be essential to move forward these efforts to revitalize communities across the state that have been neglected for far too long."

Sen. Kirsten Gillibrand said, "Many highway projects across New York state and the nation have cut through the heart of communities of color, tearing apart neighborhoods, displacing residents, and stalling economic development. This historic investment will begin the process of reversing those injustices. I applaud Gov. Hochul's work and will keep fighting at the federal level to get New York the resources it needs to invest in infrastructure that brings communities together and revitalizes our cities. We must continue to fight for an equitable environmental and economic recovery for communities who have been historically left out."

Congressman Brian Higgins said, "It is said that the built environment is not neutral, it either serves to hurt or to heal. Transportation decisions of the past devastated acres of Olmsted parkland and tore apart neighborhoods. Thanks to the vision and leadership of Gov. Kathy Hochul, those days are over. Working together we are committed to meet the moral imperative before us to fix historical wrongs and make the infrastructure investments that serve to unite and strengthen communities."

New York State Sen. Tim Kennedy, chair of the Senate Transportation Committee, said, "Not too long ago, I joined Congressman Brian Higgins, Majority Leader Peoples-Stokes, Mayor Byron Brown, and the incredible Restore Our Community Coalition to call for an expedited EIS of the 33. This was a unified front: state, federal and community partners calling for a reenvisioning of the Kensington Expressway. Today, Gov. Hochul has delivered that progress. When federal and state money becomes available for projects like this, we need to be ready to get shovels in the ground. This study will get us one step closer to achieving that."

New York State Sen. Sean Ryan said, "The construction of the Kensington Expressway through the heart of Buffalo's East Side divided neighborhoods and isolated residents, causing lasting damage to the community, which persists more than 50 years later. As work to transform the Scajaquada Corridor moves forward, I am excited to celebrate today's announcement about the future of the Kensington Expressway. These highways scarred our landscape and destroyed the vision of Frederick Law Olmsted. Restoring Delaware Park and the Humboldt Parkway and reconnecting our neighborhoods will be a historic victory for Buffalo. I thank Gov. Hochul for recognizing the importance of reconnecting our communities, and for taking advantage of this rare opportunity to make changes that will improve the lives of Buffalonians for generations to come."

Assembly Majority Leader Crystal Peoples-Stokes said, "Covering the Route 33 is a unique opportunity to address the generational harm done by the Kensington Expressway when it tore into and severed the Martin Luther King and Hamlin Park neighborhoods. Daily traffic of 70,000 cars has negatively impacted residents' health, and lowered property values. Restoring these communities is a matter of racial justice, quality of life, environmental health, and community development while also addressing the Kensington Expressway's infrastructure needs. This would be a significant step towards reunifying neighborhoods and healing decades-old wounds. I applaud and appreciate Gov. Hochul's leadership and support in joining our 15-year effort in addressing the Kensington Expressway/ROCC project."

Erie County Executive Mark Poloncarz said, "Repairing the infrastructure mistakes of the past is a big step towards reconnecting communities and improving our overall quality of life. Gov. Hochul's proposed state capital plan will examine the impacts and the future of the Kensington Expressway in Buffalo, seeking a way to restore connectivity to the historic Humboldt Parkway neighborhood, facilitating non-vehicular traffic and bringing people together. I thank Gov. Hochul for her vision and willingness to take on these important projects, which hopefully will lead to restoration of communities across our great state."

Buffalo Mayor Byron Brown said, "I thank Gov. Hochul for jump-starting the process to reconnect the neighborhoods, which were severed by construction of the Kensington Expressway. This is a milestone moment in our longstanding efforts to create one inclusive and equitable City of Buffalo. Physically linking these communities back together again will bring tremendous socioeconomic, visual, social and emotional benefits for generations to come."