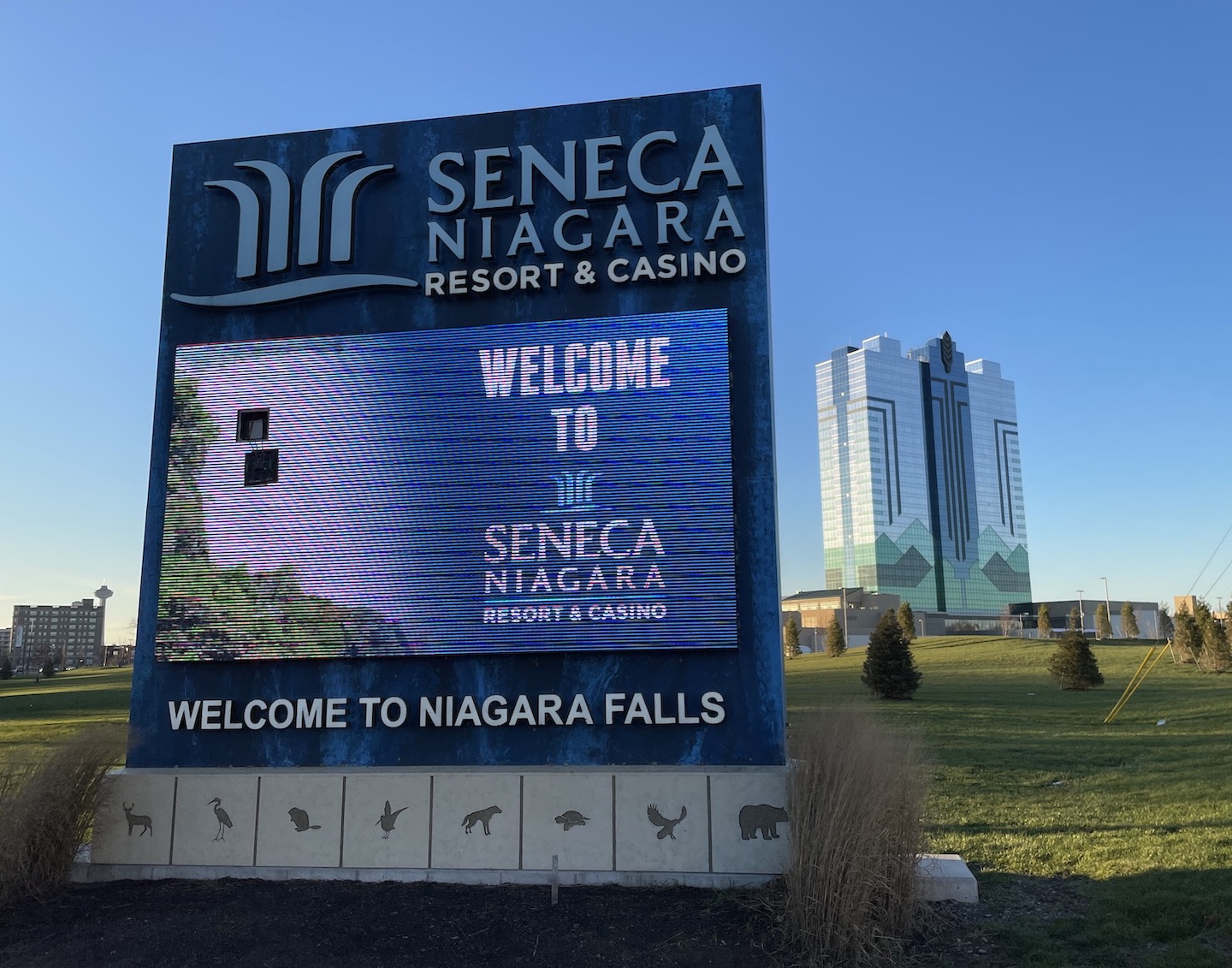 The sign points the way to Seneca Niagara Resort & Casino.

Tickets for all shows available Jan. 21

Seneca Niagara Resort & Casino will present a star-filled entertainment lineup this April. New shows for The Bear’s Den Showroom include Pablo Cruise on Saturday, April 2 (8 p.m.), and Robert Kelly & Friends on Friday and Saturday, April 15-16 (8 p.m.), as part of the “Barrel of Laughs Comedy Night” series presented by iPLAYSENECA.

Tickets go on sale at noon on Friday.

Cruise released a string of successful albums from 1975-84. Known for infectious hit singles “Whatcha Gonna Do?” “A Place in the Sun,” “Love Will Find a Way” and “Cool Love,” the band has thrilled audiences the world over, selling millions of albums and singles along the way. Don’t miss this exhilarating evening of entertainment! Tickets start at $25.

Robert Kelly & Friends brings Kelly and some of his favorite fellow comedians – Ron Bennington, Rich Vos and Jim Florentine – together for a night of comedy. The four friends tackle a variety of topics, including their shared philosophy on parenting, in edgy, hard-charging style. This is an 18-and-older show. Tickets start at $45.

Felix Cavaliere’s Rascals have spent more than half a century entertaining fans around the world, starting with “Good Lovin’,” The Rascals’ first mega-hit. Other hits include “I’ve Been Lonely Too Long,” “Groovin’,” “How Can I Be Sure,” “A Beautiful Morning” and “People Got to Be Free.” This show was originally scheduled for Saturday, May 23, 2020. Tickets for the original date will still be honored. Tickets are available now and start at $55.

The Temptations and The Four Tops are two of the most celebrated vocal groups in American music. The Temptations delivered countless hits, including “My Girl,” “Just My Imagination (Running Away with Me),” “Papa Was a Rollin’ Stone” and “Ain’t Too Proud to Beg.” The Four Tops left their mark on the all-time music charts with hits including “I Can’t Help Myself (Sugar Pie, Honey Bunch),” “It’s the Same Old Song,” “Baby I Need Your Loving” and “Reach Out I’ll Be There.” This show was originally scheduled for Friday, May 8, 2020. Tickets for the original date will still be honored. Tickets are available now and start at $45.

One of the biggest voices in country music is headed for Seneca Allegany Resort & Casino. Martina McBride will perform inside the Seneca Allegany Events Center on Saturday, April 9 (8 p.m.).

McBride is a country music legend known for her powerful voice and soaring soprano singing range. Throughout her career, McBride has enjoyed a string of major hit singles, including five No. 1 songs on the country music chart, as well as a No. 1 hit on the adult contemporary chart. Songs “My Baby Loves Me,” “Independence Day,” “Wild Angels,” “A Broken Wing” and “This One’s For the Girls” helped make her a dominant force on the airwaves and establish widespread cross-over appeal. McBride has won multiple Country Music Association and Academy of Country Music awards, and is a 14-time Grammy nominee.