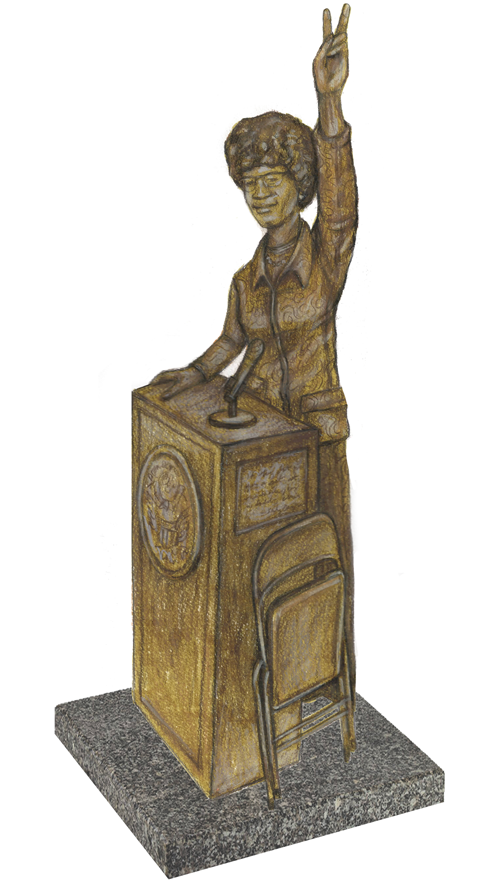 On Monday, New York State Sen. Sean Ryan announced local artist Julia Bottoms was selected to design a statue honoring the late Shirley Chisholm. Chisholm, who is entombed in Forest Lawn’s Cemetery’s Birchwood Mausoleum, made history as the first Black woman to serve in the U.S. Congress, and the first to run for president. The statue will be installed near the mausoleum this fall.

Bottoms’ concept is designed to evoke emotion and inspire reflection through a series of elements that reference Chisholm’s life and legacy. It features Chisholm standing before a podium adorned with the 1972 Democratic National Convention’s seal, with her hand raised high in the air displaying a peace sign. On the side of the podium is a plaque featuring Chisholm’s famous quote: “If they don’t give you a seat at the table, bring a folding chair.” Propped against the side of the podium is a folding chair, providing a symbolic reference to the quote.

The steering committee guiding the creation of the statue announced a call for proposals for the sculpture in October. The committee selected Bottoms’ design concept after reviewing submissions from a diverse pool of artists. In the next phase of the design process, Bottoms will present a 3-D rendering of her concept to the steering committee.

A Buffalo native, Bottoms studied at the University at Buffalo, earning a bachelor’s degree in art and a master’s degree in multidisciplinary fine arts studies. She currently serves as an artist-in-residence at Albright-Knox Northland.

Ryan’s team said, “This public initiative will demonstrate Shirley Chisholm’s incredible legacy to the entire Western New York community and beyond. The statue will help to convey who Ms. Chisholm was and what she meant – both to Buffalo and to the entire country. The statue will capture her legacy, her impact on our community, and her demonstration that women – particularly Black women – are capable of anything – even (and especially) if it has never been done before.”

Steering committee members for the project include:

√ Ruth D. Bryant – Chair of the Communities of Giving Legacy Initiative at the Community Foundation For Greater Buffalo

√ Dr. Barbara A. Seals Nevergold – Founder of the Uncrowned Queens Institute and former president of the Buffalo School Board

√ Zainab Saleh – Program coordinator for Partnership for the Public Good

Ryan said, “We received several impressive submissions for this project, and the steering committee had a difficult decision to make. The concept that has been selected stood out for its thoughtful symbolism, and for its ability to authentically convey Shirley Chisholm’s personality in a single pose. In her proposal, Julia expressed a meaningful personal connection to the subject, describing her appreciation for the many doors Chisholm opened for Black women in America. I am thrilled that we have identified a local artist who is such a great fit for this project.”

Bottoms said, “Being selected for this project is a deep honor for me. I have been given the opportunity to celebrate the legacy of a woman whose work has opened doors for me. I live in the reality of Shirley Chisholm's vision for the future: a future in which Black women bring seats to tables that the world thought they'd never have a place at. Shirley sparked the imagination of women everywhere when she made her historic run. Seeing her boldly try for that which had not yet been done echoes here in 2022 with my own work. As a Black woman in the fine arts world, my art has fought to create representation where it has been lacking, and to redefine the idea of what a professional visual artist looks like. With each project I work on, it is my hope that the next generation will find inspiration in it. Just as I have traveled the path laid by Chisholm's life and legacy, I hope to also pave the way for the women who come after me. So it is with deep gratitude to Chisholm and the other trailblazers who have preceded me that I begin work on this incredible project.”

Baskin said, “Shirley Chisholm was an iconoclast who refused to play by the rules of the establishment. Buffalo has a wealth of local artists who embody her ethos: When they are denied a seat at the table, they ‘bring a folding chair.’ Ignored by the major institutions and public officials, they have created a thriving, dynamic community, and I am elated that one of these artists will create a monument honoring a national hero like Shirley Chisholm.

“Like Shirley Chisholm, Julia Bottoms is not easily intimidated. Although she is a groundbreaking artist, she had not worked in sculpture before, so she partnered with local sculptors to develop a design concept that honors Shirley Chisholm’s life and legacy. Julia used her ability to capture the struggles and stories of African Americans in an entirely new medium, and the result will be a monument that will inspire new generations to learn about Ms. Chisholm’s contributions to our country. I am excited to see this project come to fruition.”

Brown said, “It’s been an honor to be part of this process and see the power of Shirley Chisholm’s legacy imagined in the designs of each artist’s submission. Julia Bottoms’ design captures Chisholm’s essence and is rich with symbolism. Her design invites engagement from all that will encounter the sculpture.”

Dispenza said, “It is wonderful and rare to have a sculptor capture in bronze not only the countenance, but also the style and soul of a person. Young, local sculptor Julia Bottoms has accomplished this with such excellence. Her Shirley Chisholm sculpture appears to breathe. This will be a treasured new addition to Forest Lawn’s 270 sacred acres of natural and built landscape – one that will be admired and appreciated by visitors from across our community, our state, the nation and the world.”

The Podium: Chisholm stands behind a podium adorned with the 1972 Democratic National Convention’s seal on the front. It was in 1972 that Chisholm made history as the first African American to seek party nomination for president and the first woman to run for the Democratic Party’s nomination. The podium symbolizes her powerful abilities as a charismatic orator.

The Plaque: On the side of the podium is an engraved plaque featuring one of Chisholm’s most powerful quotes: “If they don’t give you a seat at the table, bring a folding chair.”

The Chair: A folding chair is propped against the side of the podium. The chair serves as a symbolic reference to the famous quote and a reminder of the power of creating a space – not only for yourself, but for those that come after you.

The Attire: Chisholm’s wardrobe was as bold and unique as her message. Her love of strong patterns and personal flair kept audiences as captivated by her look as they were by her words. Her posture in the sketch is one she often assumed during her campaign: relaxed, but confident and holding up the peace sign. Chisholm’s body language truly reinforced the statement made by her historic run: “I am the candidate of the people of America, and my presence before you now symbolizes a new era in American political history.”