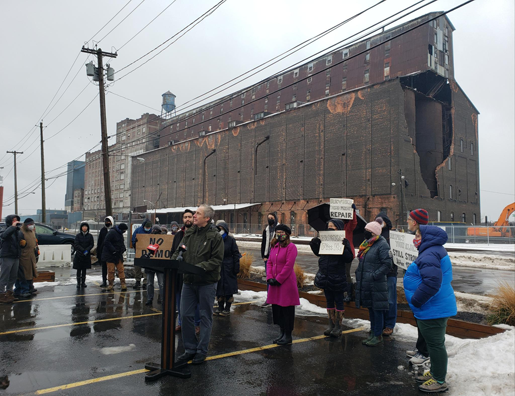 Local leaders have put out the call to save the Great Northern grain elevator on Ganson Street. (Submitted photo)

On Sunday, New York State Sen. Sean Ryan and Assembly member Jon Rivera joined representatives from Preservation Buffalo Niagara to call on the City of Buffalo to take action to prevent the demolition of the Great Northern grain elevator on Ganson Street.

Ryan’s team stated, “Windstorms recently damaged the Great Northern’s outer brick wall, leaving a hole in the northern end of the building. Citing safety concerns, building owner Archer Daniels Midland (ADM) applied for an emergency demolition permit, which was later granted by the City of Buffalo. However, the city did not consult an independent structural engineer before granting ADM the demolition permit, instead relying on the assessment made by the building owner’s own engineer.

“In light of recent reports that developer Douglas Jemal is interested in purchasing and preserving the local landmark, a clear path to saving the local landmark has emerged. Given the new circumstances, the legislators say, the city should rescind the demolition permit and allow an independent assessment of the grain elevator to be conducted immediately. Once an independent assessment is conducted, ADM could be ordered to make repairs to the building through the city’s new receivership program. If ADM will not make repairs, then the building would go to a receiver, who would then make the necessary repairs, stabilize the building, and find an interested buyer, such as Jemal.”

Built in 1897, the Great Northern is believed to be the last grain elevator of its kind in the U.S. ADM purchased the building in 1993, three years after it was designated a local landmark. In 2003, it was named to the National Register of Historic Places.

Ryan said, “For years, we have witnessed the steady destruction of Buffalo's cultural history. Every time one of our historic landmarks is left to deteriorate and then demolished, we lose a small part of what makes Buffalo, Buffalo. In their haste to deal with what they perceived to be an emergency situation, city officials relied on an assessment made by an engineer hired by the company that has been waiting nearly 30 years for an opportunity to tear this building down. This situation is a prime example of why the City of Buffalo created its new receivership program – and the city should make use of it. ADM must be treated like any other Buffalonian who lets a property fall into disrepair. We love to celebrate the successes of preservation in Buffalo, but we create those successes by taking action in times like these.”

Rivera said, “The potential loss of the Great Northern represents another unfortunate example of this region’s inability to keep intact its industrial architectural heritage that sets WNY apart from everywhere else. ADM had the opportunity to demolish the structure for decades, but instead chose to demolish by neglect. We need to be more adamant in preserving Buffalo’s unique history while reprimanding those property owners who refuse to maintain it.”

Buffalo Common Council member Mitch Nowakowski said, “As the steward of such an important building for both the history and culture of Buffalo, ADM has a responsibility to manage the Great Northern in good faith. Decades of inaction have resulted in a building that has deteriorated before our very eyes. I strongly urge ADM to do the right thing to preserve this building for future generations, or work with a buyer who will.”

Preservation Buffalo Niagara Executive Director Jessie Fisher said, “Buffalo’s historic building stock has proven to be a treasure trove of economic development opportunities. When we allow a large corporation to destroy our heritage for their own short-term ease, we are allowing them to destroy the very things that are bringing our city back to life. We urge ADM to be responsible corporate citizens and agree to sell this iconic building to those who are able to see its value, and we call on Mayor Brown to work with the preservation community to ensure that we stop being in the position of constantly responding to self-created emergencies, but have a clear and actionable plan to protect our very valuable legacy.”