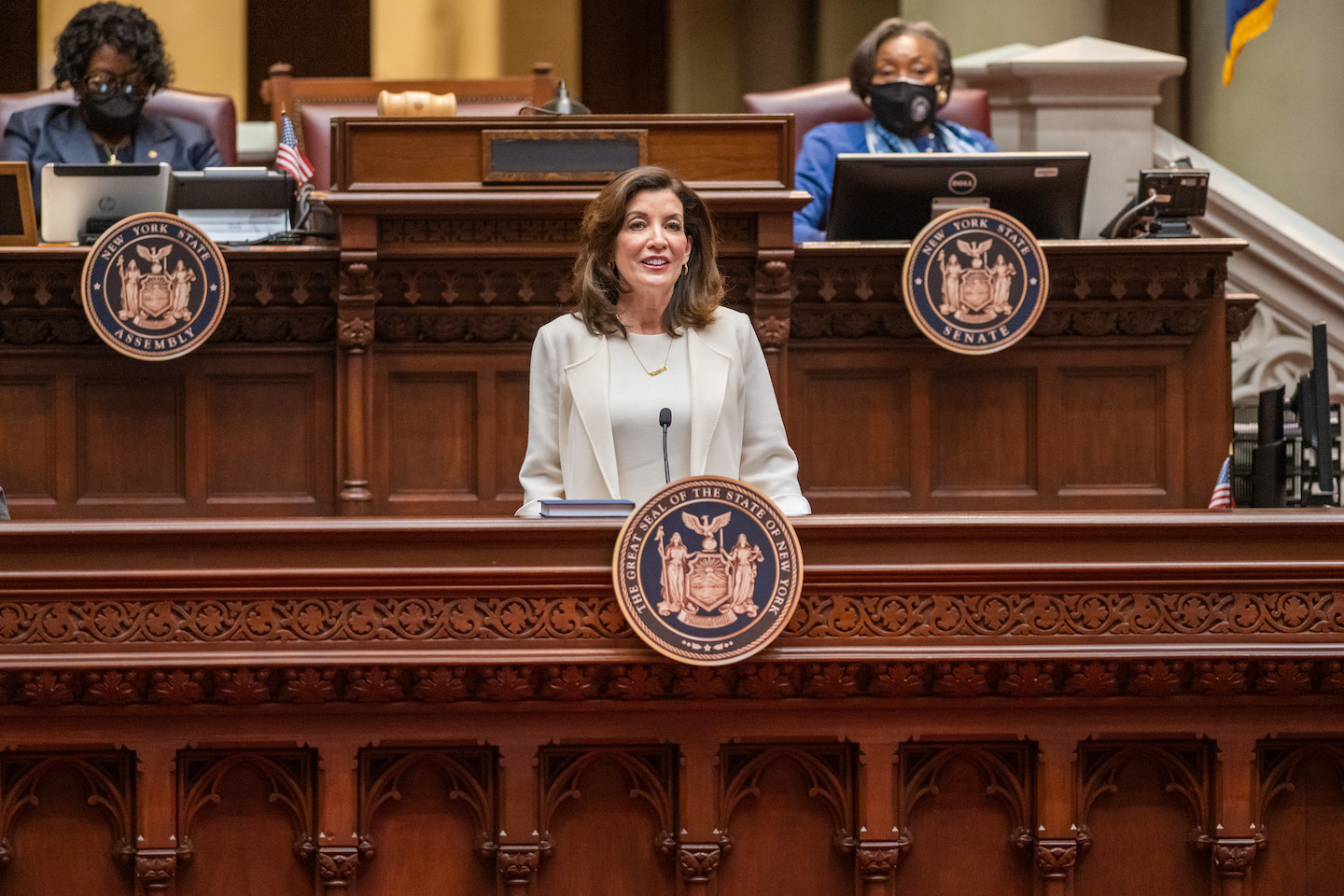 Hochul delivers 2022 State of the State, with 'New Era for New York' agenda

"As the first woman to present a State of the State address in New York, I want to make it clear I am not just here to make history – I am here to make a difference," Hochul said. "The time has come for a new American Dream. Today, we start building a better, fairer, more inclusive version that I call the ‘New York Dream.’ We will create a ‘New Era for New York’ by embarking on a bold, far-reaching policy agenda that advances our recovery and restores New Yorkers' trust in government. And through all of this, I will continue to collaborate with others and deliver results for New Yorkers."

As per her team, Hochul's “A New Era for New York” agenda includes:

Over the next five years, Hochul's plan would rebuild and grow the health care workforce by 20%. $10 billion will be invested in the state's health care sector, including more than $4 billion to support wages and bonuses for health care workers. Additionally, this plan will improve the career pipeline, expand access to health care training and education, recruit care workers to underserved areas, and strengthen home care.

Hochul's plan will accelerate the phase-in of $1.2 billion in middle class tax cuts for 6 million New Yorkers by two years – to 2023 – and establish a $1 billion property tax rebate program to put money back into the pockets of more than 2 million New Yorkers who have had to endure rising costs as the pandemic has progressed. The governor will also deliver a tax rebate for 2 million New York families and increase existing tax credits and create new ones to support food production. Hochul's efforts will also bring about $100 million in tax relief for 195,000 small businesses across New York.

Hochul's seven-pronged initiative will overhaul workforce development to focus on regional needs, expand access to new careers and career services, and recruit the next generation of New York's labor force. As part of this plan, the governor will create the Office of Workforce and Economic Development, help New Yorkers move between education and careers, expand access to apprenticeships, recruit the next generation of public servants, expand the state's technology talent pipeline, make New York a model for the employment of workers with disabilities, and protect and strengthen worker's rights.

√ 'Jails to Jobs,' A New Initiative to Improve Reentry into the Workforce and Reduce Recidivism

Incarcerated and formerly incarcerated individuals are often left to their own devices upon reentrance into society. With the “Jails to Jobs” program, these individuals will be connected with education, resources, and opportunities for job placement, which will improve public safety and reduce recidivism.

√ Moving Forward with Major New Expansion of Transit Service in Brooklyn and Queens: The Interborough Express

The Interborough Express is a historic project that would use the existing right of way of the Long Island Rail Road-owned Bay Ridge Bridge to connect transit deserts in Brooklyn and Queens. This line would connect commuters to as many as 17 subway lines, expanding access to jobs and other destinations. Hochul's plan is to move forward with the expansion by directing the Metropolitan Transit Authority to begin the environmental review process.

After the hardship brought on by the COVID-19 pandemic, Hochul's billion-dollar rescue plan will invest in the growth and retention of small businesses of the future, small business tax credits for businesses that took on COVID-19-related expenses, seed funding to establish new businesses, provide flexible grants to early-stage small businesses, expand small business lending, and help small businesses secure contracts. The governor also plans to propose legislation to permanently allow the sale of to-go drinks in bars and restaurants.

The COVID-19 pandemic exposed how inaccessible and unreliable broadband connection was for many New Yorkers, who suddenly were forced to live their lives through the internet. It is essential that all New Yorkers have equitable access to the internet, as marginalized communities are most affected by this lack of broadband access. The $1 billion “ConnectALL” initiative will deliver affordable broadband to millions of New Yorkers and transform the state's digital infrastructure through new investments.

Our housing system is riddled with systemic inequalities that need to be addressed. Hochul's housing plan will tackle these and use public funding to expand opportunity for all. Initiatives to expand housing include utilizing Safe Options Support (SOS) teams of trained mental health practitioners that will assist in transitioning individuals living on the street into stable housing, ending the 421-a tax abatement and establishing a new, more effective program, improving housing access for renters with criminal records or negative credit history, creating an eviction prevention legal assistance program, and creating a permanent disaster recovery and resiliency unit for home rebuilding.

Buildings account for more than a third of New York's climate pollution. Hochul's plan to achieve a minimum of 1 million electrified homes and up to 1 million electrification-ready homes is anchored by a series of legislative and policy actions. These include requiring zero on-site greenhouse gas emissions for new construction no later than 2027, providing the training programs necessary to ensure that the state has a skilled workforce to deliver these services, establishing a dedicated green electrification fund and electrifying low-income homes through the housing capital plan, among others.

Hochul announced plans to invest in offshore wind infrastructure, procure enough wind energy to power at least 1.5 million homes, initiate planning for an offshore wind transmission network, and launch the offshore wind “Master Plan 2.0 Deep Water.” This will ensure that the state has the strongest offshore wind energy market along the Eastern Seaboard. The governor's plan for offshore wind will support more than 6,800 jobs, a combined economic impact of $12.1 billion statewide, and more than 4.3 gigawatts of energy, enough to power nearly 3 million homes in New York.

√ Increase Access to Child Care for 100,000 Families and Invest $75 Million in Wages for Child Care Workers

Affordable child care is essential to give children the best possible chance at success while providing parents the ability to participate in the workforce. While Hochul believes the federal government must pass Build Back Better to expand child care coverage for New York families, if they do not, she will propose an expansion of access to child care. This would impact 100,000 families across New York by increasing eligibility from 200% of the federal poverty line to 225%. The governor's plan also includes a $75 million in better pay for child care workers.

Hochul's plan to revitalize the State University of New York system is wide ranging and extensive. The plan includes making the institution a global leader on research and innovation, ensuring SUNY serves students well, and prioritizing equality within the SUNY system. This transformation will set students on a path to economic success and focus on equity so that all may thrive with a SUNY education.

√ Equity Agenda to Promote Anti-Hate, Racial Equity, and Justice for All New Yorkers

The Equity Agenda will advance a wide-ranging plan to promote and support gender equity, racial equity, anti-hate, social justice, the LGBTQIA+ community, immigrants and new arrivals, and veterans with the goal of protecting the health, safety, economic opportunities, and fundamental dignity of every New Yorker – in short, to make the “New York Dream” into a reality.

By introducing a constitutional amendment, Hochul plans to limit the roles of governor, lieutenant governor, attorney general, and comptroller to two consecutive terms. The governor will also propose legislation to impose a ban on earned outside income for the same statewide elected officials, with an exception for academic positions that must receive ethics board approval.

To restore the people's trust in their government, Hochul plans to introduce legislation to repeal and replace the Joint Commission on Public Ethics (JCOPE) with an ethics entity that is truly independent and transparent. This entity will be subject to Freedom of Information Law (FOIL) requests and the Open Meeting Laws, increasing and improving transparency. This plan will also ban outside communications so that members of the entity will be prohibited from participating in ex-parte communications regarding any potential or ongoing investigation.