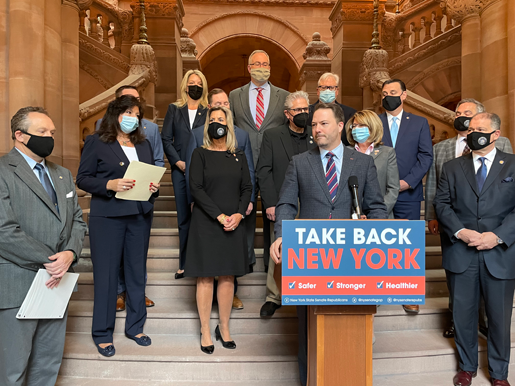 The New York State Senate Republican Conference today officially released its “Take Back New York” 2022 legislative agenda. It said, “A response to the neglect and decline of our state created by Democrat one-party rule, ‘Take Back New York’ would restore balance and common sense to government while vigorously rejecting the extreme policies of the past three years.”

Senate Republican Leader Rob Ortt said, “Democrat one-party rule has been nothing short of a disaster for New York state. From escalating taxes to blatant pro-criminal policies and extreme government overreach, it’s become harder than ever to live in our communities – something reflected in the growing exodus of our fellow New Yorkers. It’s more vital than ever, for them, that we take back our state from out-of-touch politicians and restore some sanity and common sense to our government. ‘Take Back New York 2022’ is the first step in accomplishing that and restoring our reputation as the Empire State.”

New York State Sen. Sue Serino said, “Between skyrocketing costs, degrading public safety, and government overreach impacting every area of our lives, I hear daily from residents who are fed up with the results of one-party control in New York. And it is not just talk, as we have seen thousands of New Yorkers fleeing the state just last year. Now, more than ever, we have to hit the ground running this session to get our state back on track, and that starts by putting politics aside to advance this commonsense agenda.”

New York State Sen. Peter Oberacker said, “For New York to truly reemerge as the Empire State, we need to protect our greatest asset – our people. Individuals and families are moving out an alarming rate, because we lack opportunities thanks to policies that have stunted our economic growth. Regulatory changes that will help our small businesses grow, universal broadband, investments in our family farms, and new training initiatives to help unite employees with employers are among the initiatives we need to focus on in 2022.”

√ “Offer a better quality of life for all New Yorkers by repealing bail reform and supporting law enforcement and crime victims, as well as expanding and ensuring access to a quality education for all our children;

√ “Make New York more affordable for every resident by cutting our highest-in-the-nation tax burden and enacting a series of measures that lower child care and the day-to-day cost of living in our state;

√ “Develop a strong workforce for a strong economy through substantive training and development programs, and a major commitment to our family farms;

√ “Improve our business climate and expand economic opportunity by cutting burdensome regulations, investing in physical infrastructure and broadband statewide, and moving toward a cleaner energy future;

√ “Ensure security for our vulnerable populations by securing funding for our veterans, providing needed resources to our seniors and their caregivers, combating the opioid crisis and better treating mental wellness; and

√ “Restore accountability to the state government in the aftermath of disgraced ex-Gov. Cuomo’s rampant abuses of power.”

New York State Sen. Fred Akshar said, “New York's families and small businesses have been suffering for years under single-party leadership with the wrong priorities, long before the pandemic made things even worse. Every year, our state has continued to lose hundreds of thousands of good people looking for opportunities elsewhere, when we should be creating those opportunities right here at home. We'll never be able to compete with other states when the cost of living and the cost of surviving as a small business remains unmanageably high for far too many New Yorkers.”

New York State Sen. George Borrello said, “I am proud to stand shoulder-to-shoulder with Senate Republican Leader Rob Ortt and my Republican colleagues as we fight to ‘Take Back New York.’ New Yorkers should ask themselves, ‘Am I better off now than I was three years ago?’ That’s when Democrat one-party rule took over Albany and our state. Clearly that answer is ‘No.’ In that short time, the Democrat majority passed criminal-coddling ‘reforms’ that have made New York far more dangerous while dumping higher taxes and more regulations on already overtaxed and over-burdened working people. The radical policies of the majority Democrats are driving businesses and families out of New York in record numbers. We need to ‘Take Back New York’! Our future depends on it.”

New York State Sen. Patrick Gallivan said, “As a new legislative session gets underway, our top priorities must include fixing the dangerous changes made to the state’s criminal justice system. Many of these new policies favor offenders over law-abiding citizens and lead to a sense of lawlessness, because those perpetrating violent crimes have no fear of being held accountable for their actions. We must also restore our system of checks and balances in state government as outlined in our Constitution. Finally, we need to ensure adequate funding for education, health care, senior services, agriculture and other vital programs, while at the same time maintaining fiscal stability and making our state more affordable and business-friendly.”

New York State Sen. Pam Helming said, “My commitment is to make New York stronger by facilitating the growth of our small businesses and job creators, cutting taxes and red tape, backing law enforcement and first responders, and supporting our children and families, veterans, farmers, seniors, people with disabilities, and the workers who power our economy. Unfortunately, many of the policies enacted by Senate Democrats have moved our state in the wrong direction, and people are voting with their feet. It's time to right the ship and ‘Take Back New York.’ This is our home and we’ll keep fighting for it.”

New York State Sen. Daphne Jordan said, “From COVID to crime, to Albany’s heavy-handed overreach, crushing taxes, and endless destructive mandates, New Yorkers – especially here in upstate – are fed up, frustrated, and know that our state’s going in the wrong direction, which is why more residents are heading for the exit. We need to take our government back from the criminals, Albany bureaucrats, and New York City special interests driving a destructive cycle of decay and decline. We must end one-party ruinous rule and put law-abiding, hard-working New Yorkers first. Our ‘Take Back New York’ agenda offers smart solutions to achieve these important goals.”